The Girl With The Golden Flute 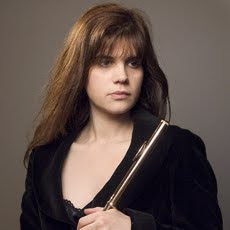 The program presented gave great joy. The two classic pieces; Handel's Concerto Grosso in B flat, OP.6 No 7 and later Tchaikovsky's Serenade in C for String Orchestra, Op.48 were pieces of some familiarity and so looked forward too. Especially the Tchaikovsky as I have many cherished memories of the work accompanying the Balanchine ballet. Here the piece was charged with dynamic forward energy. It seemed to be faster and more deeply felt than I remember. The third movement, the Elegy had the melanncholy of the composer at hand and the Finale a painfully wrought surprise and "grief" despite my familiarity with it. Even in the ballet form, the last moments of the score are heart renderingly moving, the choreography transcendingly beautiful- or maybe I am just a big sop, certainly Tchaikovsky's work has always held sway in my heart and music going experiences. Tchaikovsky may be the first composer whose name I remembered as a child. (Walt Disney's THE SLEEPING BEAUTY the probable reason!!!!!)

The theatre is my area of familiarity, music is my reward. But the combining of the theatre and music was excitingly blest by having the actual Composer of the piece present. So it was with a newly commissioned work by Peteris Vasks and later the playing of Carl Vine's Pipe Dreams, for he too was present. I am used for the Australian writer to be present for the presenting of his play, but the composer present at concert was uniquely thrilling to experience.

Peteris Vasks' composition: Vox amoris: fantasy for violin and strings "is the 2009 Barbara Blackman commission, dedicated to the memory of Dr. Louis Ferdinand Green (1929 - 2008) of Monash University "and has had its World Premiere with this tour. From the softly muted string tremolo of the opening, the solo counter of the violin played by Richard Tognetti, the work was captivating. The intensity of the sound waves throughout the long one movement was powerful. The concentration of the orchestra and Mr Tognetti was, oddly, both fiercely subdued and yet passionately expressed throughout the music's rendering. Maybe, having the composer present gave off the vibe of deep sadness and the continuing rising of musical register demanded a response of high intensity. The adrenalin of endowed sensibility from myself and my companion was a source of our conversation later. Certainly my appaluse was to give thanks both to the Orchestra and the composer for the vital experience of the circle of communication I experienced while listening to the work.

The guest for this tour was Sharon Bezaly, the Girl With The Golden Flute. Before the interval Ms Bezaly gave a dazzling, vituosic performance of Carl Vine's 2003 composition Pipe Dreams with the orchestra. Mr Vine was also, as I have already mentioned, present for the playing of his work - a double thrill to thank in with applause!! After the interval Ms Bezaly, played a new work by Jose Serebrier, Flute Concerto with Tango. It is a piece commissioned by the flautist and was having its World Premiere concerts. The composition gives ample opportunity to the flautist to reveal her virtuosic skill, illustrating "her abilty to play long segements without an apparent need to breathe (she does circular breathing)." Of the two pieces I preferred the Vine.

There was a sombre note about this concert. Maybe the concentration demanded by the presence of the two composers? Whatever, the performance was, as usual, highly satisfying. What if Tchaikovsky had also been present!!!!!? Of course, he was, in spirit.

Playing in Melbourne 27 October.
For more information or to book click here.
Posted by Pearly Productions at 11:14 PM