How To Act Around Cops 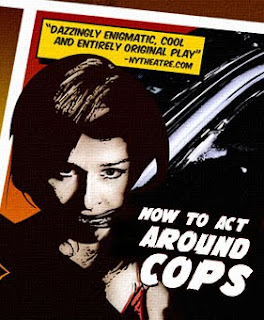 Here we have another handsome looking production in a Sydney Theatre, The Darlinghurst Theatre. (See The Only Child; Gethsemane). Jessie Giraud has designed a Set in the black box of the theatre space, that is both aesthetically pleasing (particularly the curious wire sculpture that hangs on the upstage left hand corner) and eminently practical. A car!!- a car that has functional lighting, doors and steering wheel and coverts into other functions, eg a bed in a motel room - most ingenious. There is also video support on a back screen (has no credit) that frames the action of the play with visuals and announcements much like movie credits. The costumes, also Ms Giraud, are also practical and useful to the storytelling identification of the characters. The lighting design by Luiz Pampolha is both inventive and effective. The Sound Design by Jeremy Silver is both amusing and very intricate and supports and creates a reality on stage of the journey of the car and characters with a sense of aptness and humour. The initial moments of created fantasy, the engine revving, the lights springing on, the energy of the men behind the dash board, were quite exhilarating and promised more than what was ultimately delivered. The design elements are super.

The Acting by all of the cast is good and has a sense of ensemble. Andrew Bibby, Justin Stewart Cotta were especially entertaining. Angela Hattersley brings an air of good sense to the crazy situations that her character finds herself in and tries to sort out. Leland Kean, the Director, manages the difficulties of staging the play well and mostly guides the actors through a fairly highly energised performance mode that keeps the audience mostly engaged. However there are clarity problems in the story telling that sometimes left me a little bemused and puzzled. (As the production settles this may vanish - I saw it on Opening night.)

The play itself is another of those “boys” fantasies about testosterone energy – a kind of extended under graduate sketch, this American Fringe play has been Australianised, and involves, cars, petrol, drugs (didn’t believe the drug consequences of swallowing a big bag of Cocaine, by the way), fetishised sex, a ballsy female character, murder, a body thumping the roof of the boot of the car (a touch of urban myths creeping into the recipe of the play), a mayhem of guns and a crooked and aggressive, if not “dumb” cop (- another fantasy!!!). A shaggy dog / road “movie” / theatre story. It is farcical entertainment and there is nothing wrong with that, in this present world it has it’s place. It is fairly silly and is simply another choice in the Sydney Theatre menu to have a fairly mindlessly good night at the theatre. The guys might like it a lot.

Playing now until 30 October.
For more information or to book click here.
Posted by Pearly Productions at 11:12 AM

I saw this play tonight and couldn't shake the feeling that I was watching a stage adaptation of a short film. I guess the two art forms are merging, at least in some people's minds. There was a lot of energetic work going on but to what end? I managed the odd laugh but overall was left more bemused than amused. Bemused as to why the play was chosen other than as a showpiece for the actors and director. This is a disturbing trend in Sydney independent theatre. Work is more likely produced to 'show wares', rather than because there is a driving need to produce something. Of course I'm aware that it is this very need that makes people want to show their wares, it is just that often the choices of material have more to do with the former and less with the latter, making for a lot of empty and vacuous theatre. There is nothing wrong with choosing something purely for its entertainment value but all too often we see plays with 'great roles' (read 'showy') but not much substance being chosen, leaving the audience still hungry after the meal. And while I'm at it, I'd add the recent STC 'Streetcar' into that mix as well. I was starving after that one! Not a lot of meat on those bones!