Missing the Bus to David Jones 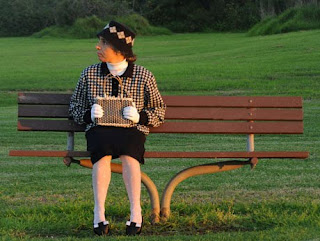 This year I have had a very exciting (and hope filled) set of experiences in the Sydney Theatre scene. This work hosted in development by Campbelltown Arts Centre and Performance Space concerns a part of our community that is rarely exposed, explored or even acknowledged: The aged.

It is odd since most of us will complete our journey, in this consciousness:
".........The sixth age shifts
Into the lean and slipper'd pantaloon,
With spectacles on nose and pouch on side;
His youthful hose, well sav'd, a world too wide
For his shrunk shank; and his big manly voice,
Turning again towards childish treble, pipes
And whistles in his sound. Last scene of all,
That ends this strange eventful history,
Is second childishness and mere oblivion;
Sans teeth, sans eyes, sans taste, sans everything."

"...Theatre Kantanka entered a hidden micro-universe existing in care facilities scattered throughout this city, (and) we found men and women in different stages of the ageing process, adapting their lives to new "homes", finding places in new social orders and adjusting to different physical and perceptual realities in themselves, and in those around them".

Set in the entertainment/common space of a Aged Care Facility, we are told of the progress of the biological changes to our bodies - a quotation from Simone de Beauvoir: "life is an unstable system in which balance is continually lost and continually recovered: it is inertia that is synonymous with death". Then we meet a collection of patients living their lives. We, too, meet some of the carers. Over a time span of an hour or so the world of this "home" is shown to us tragically, humouously, sensitively, delicately and truthfully.

The effect of the journey is calibrated individually by the audience, I believe, by the personal awareness, that each of us have to the world of this part of our culture. Sitting beside me, to my left are several young people, who initially find the characters and their situations amusing even hilarious. One of them maintains this quietly amused state, another gradually is absorbed and leans forward, tenderly and contemplatively to the unravelling sequences. In front of me, to my right are two friends who I know are caring for a mutual friend in the later stages of his journey. They are intensely watchful, thoughtful, moved and gently amused. Both, they tell me later, sad and yet full of gentle empathetic joy. They laugh as well as weep. In our subsequent conversation they tell of both amusing and disturbing adventures that they recently have had visiting and caring for our friend. I sit in my seat and contemplate my place in the scheme of relentless time and other things. I sit beside a friend who may care for me in the future. Someone, I know, older than I, feels that they must leave the performace early - maybe too difficult to endure.

The actors all play a multitudinous range of characters, both staff and patients. Their observational skills and details of execution are tellingly convincing. There is no judgement, there is science and care. There is admiration and affection. The carers are just as realistically presented as the patients, both kind and cruel, but all in some degree "saints" of presence, some with a life of dedicated duty and a rich life outside the "home". How do they do it? I ask.

The work of Kym Vercoe and Arky Michael is especially remarkable. (Both these artists were also principals in THIS KIND OF RUCKUS and similarly outstanding in their performances.)

The director, Carlos Gomes, who is also Artistic Director of this company, has employed Video/photo (Joanne Saad) and a Sound Design/Composition (Nick Wishart. Editor: Fadia Aboud) to inject humour, irony and pathos into the performance. The choice of music is especially comforting and reassuring. It has both an aptness of emotional temperature and a rapt sense of repectful nostalgia. The lighting (Sydney Bouhaniche) bathes and reflects the experience of the characters subtly and is supportive of the video work.

Most of these artists involved in this project I have met many times in this unforunately regarded "fringe" form of theatre in Sydney this year, some working with other companies as well. Their skills are undoubted. Their courage and resilience to continue to create this very culturally and socially responsible work is almost "saint like" in its committted persistence. The funding bodies that supported this work ought to find further ways to bring this work more centrally to the ordinary Sydney theatre goers experience, at least - here is work that The STC could easily transfer to the Wharf.

It is ironic at Festival Events around the capital cities of Australia, time and again, one sees programmed work from overseas companies that cover similar grounds and occupations of interests and are attended rapturously in a kind of awe of appreciation and wonder by the local "culture vultures", while the home grown work is relatively ignored or shunned. This year The STC hosted Ontroerend Goed in their amazing work ONCE AND FOR ALL WE'RE GONNA TELL WHO WE ARE SO SHUT UP AND LISTEN, a theatre piece about the turbulent years of the teenager and yet I have also seen at Campbelltown Arts Centre (which also developed this MISSING THE BUS...) a disturbingly brilliant work of much potential called THE RIOT ACT; I attended a work at Shopfront Theatre in Carlton called SUPERPERFECT; and recently two works by Version 1.0: THIS KIND OF RUCKUS and THE BOUGAINVILLLE PHOTOPLAY PROJECT, and none of these works yet will have been selected or even sometimes seen by Festival programmers. This is a tragedy for the possible enrichment of the fabric of the Sydney/Australian/International audiences. Here in these companies' work, New Australian Writing and Performance of some high order is created over and over again. (Of course, I have also seen some horrible stuff as well!!! All is not perfect.)

Congratulations to Campbelltown Arts Centre and Performance Space for the vision and committment to the communities in which you work.The Performance Space a tireless and often rewaeding place to see good theatre - keep attentive to their programming.

MISSING THE BUS TO DAVID JONES was not a perfect evening in the theatre but it was an important and unmissable experience.