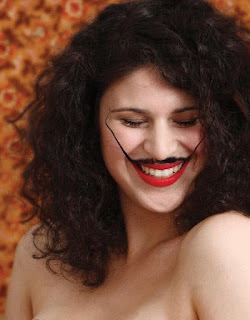 I had a very exciting and translating experience with this play and production. I can thoroughly recommend it.

Jose Rivera born in Puerto Rico in 1955 now lives in Los Angeles. This play reflects the cultures that he has grown in. “Rivera insists that all aspects of life are magical if looked at from the right perspective.” Following on from Blanche DuBois’s cry in A STREETCAR NAMED DESIRE: “I don’t want realism, I want magic” this play appears, most timely, on a Sydney stage. It is MAGIC. Written in 1999, as part of the South Coast Repertory’s Hispanic Playwrights Project in California, it had it’s premiere at the South Coast Repertory in 2000. “REFERENCES TO SALVADOR DALI MAKE ME HOT is set in Barstow, California. An army wife (the play is set just after the first Persian Gulf wars) questions martial commitment on both conscious and subconscious levels, alternating between surreal and real worlds.”

The Set Design (Rita Carmody) has a raised platform, lit from underneath to give a floating feel, (Lighting Verity Hampson) surrounded by black walls with tiny shelves on which bottled candles glow. Potted red hot chilli pepper plants stand beside tins of cat food. At one end of the stage platform there is a red desert sand floor, and Dali-like, a white refrigerator lies on its side, marooned in the space. Above the action is a gently lit, floating ball (planet?) suspended by a red cord. The visual is surreal in its influence. This is realised further when a Cat (Taryn Brine) and a Coyote (iOTA) regard each other warily and begin a conversation of sexual liaison, hot, hot, hot!!!! The Moon (Lani John Tupu) watches from above and joins in. This surreal engagement is rich in its manifestations as poetry and the tensions of the Dali sexual dreams in his art work. Gabriella (Olivia Stambouliah), the army wife appears, dressed in sweatshirt toting a 9 millimetre gun. She issues an invitation to the moon: “Have you ever danced with a woman with a gun?” The moon obliges and comes down to her, for “They say from the tears of women are civilizations made.” A glorious and strangely surreal experience unravels for us. Poetic, provoking and attractive for its non realistic apparition. Such a relief from the boring testosterone driven work we have had a feast of here in Sydney, of late.

At the end of the first scene I was still grasping the world and the wonder of that world that Mr Rivera had given us. For the second scene, the furniture of the set is re-configured to be recognised in the red sandy landscape as a kitchen. The third scene, later, a mattress floating on the sand represents a bedroom. The design elements of Ms Carmody a simple and eloquent. These two acts are more real realistic in their expression, although the language is still as fabulously wealthy as previously. The first act was placed in context for me with the second act unravelling, as we watched the husband, Benito (Stephen Multari) newly returned from war, and his wife, Gabriella, struggle to discover and explore what their relationship has become with the passing of recent time. He in the commanding position of a soldier at war in the Persian Gulf and she at home learning that she too has a world to command as her education expands. The grande mal of the battle field is juxtaposed with the petite mal of the bed and love making. The skill that Mr Rivera brings to a play dripping with surreal poetry and densely felt contemporary politics and the dilemma of modern man is poignantly and stimulatingly delivered. Gorgeously balanced. The final scene takes us back into the floating surreal torture of Gabriella’s pain with the Cat and the Coyote (now a ghost) and the fading moon in the approaching blast of the rising sun, and come to a cataclysmic question for Benito, and all their fates will hang on his answer. Gabriella: "Did you see the moon last night? I really have to know this, Benito. I really have to know." What happens next, is for you to find out. It is a most wonderful ending to a very extraordinary play.

Anthony Skuse with his second directorial offering of the past two months (BAD JAZZ), once again demonstrates is acumen for eliciting the detail from text and serving all elements that the play requires to make it a cogent experience for the audience. (He is of course, this time blessed with a very exciting writer.) The set and costume design (Rita Carmody), the wonderful lighting (Verity Hampson) is beautifully augmented by an inspirational and haunting sound design by Jeremy Silver. Juan Carlos Rios as Musical Director as engaged all the actors as a live orchestra: clarinet, guitar, harmonica, the human voice and every investigation of set and props to create percussion instruments, has created an immersion of sounds to compliment the story and character developments as part of the poetic expression of the text.

The actors are committed to their tasks. Carmen Lysiak as voice coach has done a superlative job in guiding these actors to an authentic engagement with a latino dialect that gives credence and magic to the world of the play and music to the poetry. (Mr Skuse has sometimes a penchant to reduce the dialect challenges of his chosen plays to the Australian sound and I have argued by doing so has diminished the power of the writers. (See pool (no water).) In this instance he has striven for the sound of the culture and it is a feature that allowed me to be transported out of the Stables venue to another world. Lani John Tupu (Moon – gorgeously accurate and rich with the language of his strange character), Arka Das (Martin – a 14 year old boy discovering his manhood), Taryn Brine as the Cat and iOTA as the Coyote are all physically and vocally alive to their task’s possibilities. I was particularly impressed by iOTA who I had never seen before, and knew him only as a legend of the musical theatre (Hedwig and the Angry Inch), and saw a wonderfully skilful and economic actor at work. There was explosive modesty in his work and it was impressive to watch.

Breathtakingly good were Olivia Stambouliah and Stephen Multari as the wife and husband, Gabriella and Benito. They were powerfully gripping in their character’s tensions and dilemmas. The skill of the dialect and the romantic control of the passions of the script were exciting to witness. Two young actors that Mr Skuse has helped hone remarkable performances. (I understand that both actors, Cat as well, are reprising roles that they began in another production at TAP Gallery). Poetic, sexy and passionate their struggle elicited great compassion from me. (Having seen Mr Multari earlier in the year (BISON), this work was a revelation.)

I believe this to be one of the highlights of my theatre going this year. Certainly, that night, I had dreams of an order that I have not had for some time. Thank you Mr Rivera. Reflections of Salvador Dali made me hot!!! Do go. The writing is interesting in itself, let alone what Mr Skuse and company have managed to realise for us on the stage.

Playing now until 17 October.
For more information or to book click here.
Posted by Pearly Productions at 11:01 PM

Kevin, I was wondering what you would think of this magnificent play.
I will also agree with you and say this would have to be one of my theatre highlights of the year, followed closely by Ruben Guthrie.
Before seeing it I was a little worried that it was going to be some obtuse absurdist experience with a story to obscure to follow. Gladly what I ended up experiencing was a delightfully poetic reflection on relationships which funnily made more sense than some other more "conventional" productions I have seen recently.
I thought the entire cast were exceptional and especially so the non-humans characters - the cat, coyote and Moon.

Kevin, I am a student in the United States writing a research paper on this play. Might I interview you via email about your thoughts of this production. If so, please let me know. Thanks, Megan