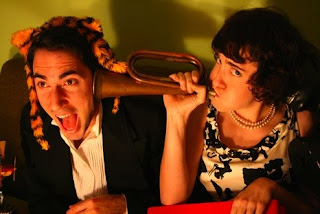 This is a joyous and really beautiful, silly night of escapism in the theatre. It ought to resonate in the hearts and lungs of a lot of you out there, especially if you are a regular theatre goer.

The contemporary material and even the re-addressing of some of the Classics we have seen this year (or any theatrical season) keep us truly alert to the depressing state of world events and personal journeys of some of our fellow travellers. It is sometimes, if you go to the theatre a lot, after seeing, consecutively, one truthful but overwhelmingly “lurid” observation of the tragedies of living in 2009, so disheartening and dispiriting, that to close oneself up in the “cave” of one’s own dwelling may seem the best option to cope. Now, along comes this disarmingly charming work by two young “clowns” and you learn, perhaps, that there are enough of us out there to weather the “burdens” of life and keep a light shining. Reminiscent, in effect, of the imported British Company, HOIPOLLOI’s work, FLOATING, shown at the Sydney Opera House in March, one can leave the theatre space, invigorated and re-charged with the health of being ALIVE and pleased to be alive by returning to the infantilised worlds of our imagination of yesterday.

When I was little, I had a cubbyhouse under our house and it was where I played, mostly with my siblings, and a lot, by myself. I am sure, I hope, as children, we all had a cubbyhouse where the world of our imaginings took us to vaster and greater worlds then that of our environment. Worlds of gigantic possibilities were lived and explored in – it was a happy time - I loved it. It competed with going to the “pictures” at the Randwick Ritz. Holly Austin and Adriano Cappelletta, as adults, have built a cubbyhouse at the Old Fitzroy and have invited us, as adults, to come and play with them. The freewheeling invention of the imaginary twists and turns and jumps and leaps of the all possible imaginary worlds of two unfettered, fertile and febrile actors/clowns like Ms Austin and Mr Cappelletta is an ecstatic “Luna Park” ride – “JUST FOR FUN”- that is simply joyous to surrender to and PLAY in.

In a beautifully, but simply, painted set design by Pip Runciman, that of a faded playroom – with some spider webbed and dust covered bicycles in an attic - in appealing primary colours, handsomely illustrated and lit by a very empathetic lighting design by Verity Hampson (A champion again!!); equipped with some simple ‘sound machine’ inventions and instruments (Sound Designers Holly Austin & Tobias Gilbert), Ms Austin & Mr Cappelletta, using their imaginations and finely tuned instruments of vocal and comic dexterity, transports one (Me and you) on a series of appealing and hilarious adventures. The imaginative inventions that they invite us to play in is, gloriously, at their urging, but, entirely, of one’s own will to participate. Just as it was with the HOIPOLLOI experience, if you want to play then you will have a great time. If you don’t you won’t. The playfulness of one own’s commitment is the crowning pleasure of many such pleasures, of this opportunity to revisit that world that we once had as children, that as adults, burdened with all our other overt responsibilities, we have been taught to suppress. “GROW UP, FOR GOODNESS SAKE.” For A guilt free indulgence of your inner child here is an experience worth taking.

It is exciting to see these two resourceful actors explore the joy of performing. Ms Austin recently seen as Lady Anne in RICHARD III at CarriageWorks; and Mr Cappelletta, a Sydney Theatre Critics (2006) award winner for his performance as Rodolpho in A VIEW FROM THE BRIDGE, are no slouches with the dramatic side of their talent and amplify here, with this devised and performed invention, the range of most great comic actors. It is mostly usual for the great comics to have the capacity to be tragic, it is not always possible for the great tragedians to be comic. (Reading the biographies of a luminary like Laurence Olivier is a case in point. Contrasted with the biography of Bert Lahr, there is room for contemplation of this observation.) There is much humour here in this production (Directed by Jo Turner), but we should be warned against the superficial definition of comedy as something that merely makes us laugh. "I cannot help thinking that to identify comedy with laughter is to begin at the wrong end of the stick….. The truth is that just as the emotions evoked by tragedy are too complex to be merely sad, so comedy is too complex to be merely funny" (L.J.Potts.) Both of these young artists have the capacity to make us laugh explosively out loud, chuckle delightedly, grin pleasantly and smile personally. They also can take moments in this work when they feel deeply and look movingly into the abyss of the chaos in which we live and yet indicate an optimistic feeling about the possibility of safety and even joy, of being alive, and consequently move us deeply with little details that cause real “human life-feeling”, a sense of vitality or “felt life”. CuBBYHOuSE both delights and moves you.

Trained at NIDA, together, these two artists (and others in their year of study - Connie Chang’s Cabaret Roadshow, another outcome of their invention), blessed with the inspiration of master teacher’s such as Keith Bain, Julia Cotton and Lynne Pierse (These artists certainly deserve the recognition of their selfless devotion and skill out side the walls of the NIDA Institutuion) have with the help of further scholarship funding, worked with renowned acting/“clown” teachers Phillippe Gaulier (Mr Cappelletta); Pierre Byland and Julien Cottereau (Ms Austin). Home they come and in their own personal struggle as young artists in Australia to find out, within the difficulties of their profession here, “Who am I?” “ Who do I want to be?”, while dealing with the rejections, audition after audition (just a normal part of the profession), have invented a work that goes beyond their own artists dilemma and in their inspiration help others “confront…. the choices about what they want to be.” In a newspaper article (Sydney Morning Herald –Metro [November 6 -12, 2009] the two artists go on to say “...It has taught {me} to have fun, something professional actors sometimes forget to do… It reminded us about what we like about performing – that simple thing of dressing up and pretending to be someone else.” I can assure you, that although you won’t dress up, unless you do so before hand, (and why not do it?) you will have the pleasure of pretending again, and loving it.

Unusual programming again from The TAMARAMA ROCK SURFERS. THE BOUGAINVILLE PHOTOPLAY PROJECT, just finished a season, at the Old Fitz, was an introduction to a form of theatre that is not usually seen by many theatre goers outside of Performance Space, in Sydney (proper) or Festival events. So, this deliriously delicious work, sits, outside the expected. Congratulations to the artistic vision of that company. Festival and Touring bodies take note.

Just to let you know that this is just not this "reek(ing) old man in a nursing home" [see Comments in THE TAMING OF THE SHREW]. He is not alone in his response I would love to quote from XPress in the Tamarama Rock Surfers Season Brochure: “Whether you’re looking to reconnect with your inner child or just disconnect from adulthood, CuBBYHOuSE will have your imagination in overdrive.” Go, Go Go!

(For those that don’t know, I may need to declare since I have mentioned NIDA, that I am a teacher of acting at NIDA and other organisations both in Australia and Internationally.)

Playing now until 21 November.
For more information or to book click here.
Posted by Pearly Productions at 7:51 PM

I would just like to take time too thank the posters for doing what you do and make this community great im a long time reader and first time poster so i just wanted to say thanks.