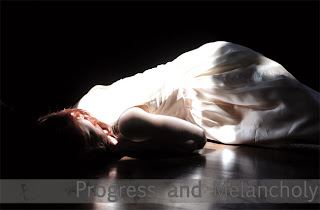 PROGRESS AND MELANCHOLY is "A new physical theatre work based on Anton Chekhov's THE CHERRY ORCHARD. " Using the skeleton framework of Chekhov's play and some of the functions of some of his characters, six actors/dancers and a musician: Todd Macdonald, Nadja Kostich, Majid Shokor, Christophe Le Tellier, Paea Leach, Sara Black and Ernie Gruner, under the direction of Bagryana Popov, explore "people's behaviour during a time of upheaval.... depict(ing) profound social change and disorientation...... to impart a sense of the transience of all things."

The actors use text from the play, loosely, and with dance/movement, delicately and beautifully sketch the events of the four acts of this great play. Although they use their own names the actors generally represent the widely human dilemma of the Chekhov characters: Lopakhin, Gayev, Trofimov, Anya, Varya and Lyuba. The principal events are sketched in and the "crisis" of each of the acts are more or less represented e.g. the Lopakhin development plans, the wastrel inclinations of Lyubov (She is treated fairly romantically), the childishness and foolishness of Gayev, the political and divided loyalties of the young Trofimov and Anya, the pathos of abandonment of the sister/'servant' Varya.

Added, occasionally, are other texts of a more contemporary political/monetary/trade observation (eg the iron ore and coal ships off the coast of Newcastle, interpolation). It seems to be a kind of fop to justify the piece as a more pertinent exercise for our times. However, I felt, the substance of this added material, by being so specific, seems to undermine the breadth of the human observation of the original and the possible first urgings of this creative team, and rather diminishes the impact of the original intentions which the title of the piece suggests: an observation of progress and the melancholy that that throws up as part of the eternal human condition.

For, the acting is generally very moving and the choreography of the "dance" is, both, very impressive in its craftsmanship and especially in its expression and execution. Images, for example, of rolling coins and the laying on the beautiful wooden floor and the pathetic yearnings by Gayev and Lyubov are cogent and often powerfully simple in their presentation. Trusting the deconstruction of this play, accompanied by a body language of such accuracy and grace, without the overt and not fully dramaturgically "fitted" contemporary political points of view, with a less hasty cut down of the relevant, thematically, events of the last act, for instance, may have even more artistic and satisfying impact and memories for the audience. As the piece stands,when I saw it , the contemporary attempts of social relevancy seemed an unnecessary intrusion on the title of the piece. (Dramaturg: Maryanne Lynch)

The director, Bagryana Popov, has with her Design Consultant (Adrienne Chisholm) opened up and used the space cleanly and with refreshingly bare breadth. The columns, the beautiful period windows and the wooden floor of the actual space resonate the Ranyevskaya Estate beautifully. The lit artificial trees, outside the space and seen through the windows are, initially, potent symbols. Their extinguishing of the "orchard" was unsatisfactory (probably budgetary restraints) and the absence of the axe blows of the last symbols of Chekhov's original I sadly missed. The costuming, elegantly representative of character and practical,for the dance, all at once. The Soundscape and the use sometimes of a live musician are subtly blended into the action of the whole. (Musical Director: Elissa Goodrich)

I was a guest of the company at a final dress rehearsal of this piece. The urgent replacement of one of the performers was seamlessly integrated even at this late stage without, for me, much distraction.

On the whole I was refreshed and stimulated by the vision and execution of the work. Chekhov , even Stanislavsky and Dantchenko, may have been pleased, too.

Playing now until 29 November.
For more information or to book click here.
Posted by Pearly Productions at 5:49 PM