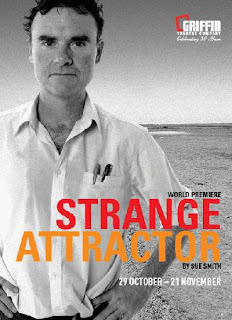 This play is set "in a railway construction camp..... inland from Port Hedland, Western Australia in the "wet mess" - a featureless space with tables and a bar. The working personnel wear identical uniforms covered "in the red dust of the desert." (Design by Jo Briscoe. Lighting by Bernie Tan. Sound Designer and Composer, Steve Francis).

The play's action is told in one act, 17 scenes, and uses a simple split time mechanism (the present and a few weeks ago) to tell of the investigation by a Company Officer (Colin played by Darren Gilshenan) into the death of the Safety Officer (Gus played by Sandy Winton) during a severe cyclonic storm: "a good man in a bad place." It tells of a cover up, by all concerned, that allows the reputation of a good man to be impugned to cover the stupid actions of a selfish and drunken group of people who thereby avoid responsibility and the consequences of that complicit decision. Better the livelihood of the living then the honour of the dead. (Very Ibsen like in its moral dilemma.)

This new work by Sue Smith, a writer honoured, principally for her Television scripts: BASTARD BOYS, THE LEAVING OF LIVERPOOL and BRIDES OF CHRIST [co-written], still has that sense about it. Television, of a decade or so ago.

The characters in the play seem to me to have a thumb line drawing of functional caricature, that in the visual medium of television might be camouflaged more circumspectly in the reality of the immensity of the actual location. But, here, in a tiny theatre space, the Stables Theatre, they are too broadly written with patches of purple prose that are difficult to believe are coming from the mouths of these supposedly, rough and ready, real men and women: "There are places on this planet humans aren't meant to be...... Clinging to sanity on the edge of the precipice. A little cosmic joke. The fates giggling behind their hands when they put the most precious, the most elemental of substances in the most inhospitable of places...... I know that at two in the afternoon the sun's a ball of hate. The world out there's like a medieval vision of hell. And sometimes the very dirt under your boots feels like it's throbbing with loneliness..." An actor might be thrilled to have such text to say but believing the real world speaking it in these circumstances was hard to do. The very dirt throbbing with loneliness!!!!!

Combined with this 'poetic' prose, the Director (Nick Marchand) has permitted some acting that is cliche and melodramatic - hyperbolic in its expression and erring on an indicated truth rather than the actual experiencing of it - truth. In the actual scale of this theatre space it was, for me, often "over the top" and distracting - drawing attention to its effects and displacing the possibility of my belief in the world they were trying to create. (Either too much vocal or physical affects or just too much theatrical energy that blurred the action.)

On the other hand the work of Darren Gilshenan as the Company Investigator, Colin Murray, was grounded and finely judged for scene by scene, and finally accumulative effect in his part of the story telling. This performance along with Mr Gilshenans performance in ELLLING continues to ímpress the range of this fine actor.From the delicate and intricate comedy in ELLING to the understated strength of will and growing moral outrage and menace in this strangely old fashioned play and character structure. (Mr Gilshsenan's Directing skills at the 2009 Coogee Festival in February, THE SERVANT OF TWO MASTERS, was also evidence of a growing master of his crafts) Similarly, Ivan Donato impresses in his smaller supporting role of Chilli - the Chilean barman, trying to forge a possible life of rescue for his third world family, especially in his outburst of defence of his own actions in scene eight. An understated truth emanating from a subtext of motivation from the action of the situation and attached to the other characters as both cause and influencing the action on their plight, plainly and movingly.

I saw this work some time ago and have since read the play again. From the enthusiasm of some of my friends I may have had higher expectations of this production and play than I should have gone in with. I found the afternoon very old fashioned and with two exceptions overwrought. It was disturbing for the wrong reasons. I hope I am not being, just contrary. Disappointing.