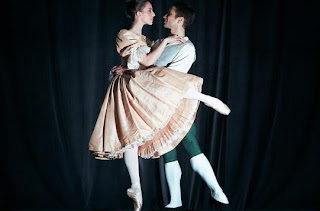 The Australian Ballet present CONCORD at the Sydney Opera House.

I personally love Dance. I look forward to going as a respite from words and actors and acting of which I see quite a lot. I see the dance as a relief and delicious rest at seeing another affecting expression of the human condition. Music and bodies launched into spaces in ways that I could not personally contemplate doing. Gaining images that expand my perception of the world around me, help me to perhaps envisage differently. I didn’t see my first ballet/dance company until my early 20’s ( A touring company: The Winnipeg Dance or Ballet Company) and I have always being enamoured (and jealous of the skill, until I learnt of the arduousness of the life demands of this form of Art). I particularly enjoy the non-book form. CONCORD then promised a satisfying diversion for me.

This program, first presented in Melbourne in August and then in Sydney in November, consisted of three works by very exciting contemporary choreographers.

The first work POR VOS MUERO (For thee I die) by Nacho Duato. This particular work was presented at the Sydney Festival two years ago by the Choreographer with the Compania Nacional de Danza at the Lyric Theatre. “Nacho Duato was inspired by the old Spanish music of the 15th and 16th centuries and the beautiful verses of the Spanish poet Garcilaso de la Vega. (The music and the poetry {in Spanish} was pre-recorded, spoken by Miguel Bose.)This is a beautiful seamless work made up of different combinations of dancers, reflecting the many moods of the musical choices, from court dance to religious and folk dance modes. The Lyric Theatre stage, where I first encountered this work, has a scale and size to it that gave my first experience of this work a breathless majesty and a sense of the Spanish pageantry of the Romantic Golden Age of Spain – or what I imagined it would have been. Here, on the Opera Theatre stage, comparatively, the work was still beautiful but did not have the same breadth of space and therefore power of imaginative expression. The Set Design (Nacho Duato) that was limited to a back wall and a red-hung curtain appeared less impressive then in the first incarnation of my experience of the dance. The costumes (Nacho Duato [ in co-operation with Ismael Aznar] ) were as visually stimulating as ever. All in all it was a more than satisfying opening to the evening.

The middle of the program was SCUOLA DI BALLO. The choreography by Alexi Ratmansky after Leonide Massine, based on Carlo Goldini’s, five act comedy. The Music by Luigi Boccherini arranged by Jean Francaix. The Costume and Set Design by Hugh Coleman. The Lighting Design by Rachel Burke.

The ”classroom ballet” has a generous history in the repertoire and is usually comic in its intentions. Often, in my experience of this kind of work, the humour becomes a little awkward to sustain without pressing credulity, except for the die hard balletomanes who love every “funny” gesture. At this performance I was won over for all of the time – the dancing and the character acting (Commedia style) was terrific. This ballet is based on the Ballet Russes de Monte Carlo version of Leonid Massine from 1930. From the Australian Ballet program essay by Valerie Lawson: "Now, Russian choreographer and former Artistic Director of the Bolshoi Ballet Alexi Ratmansky, a great admirer of Massine, has created a new Scuola di ballo. He loves the storytelling aspect of Massine’s ballets, recognising that ‘his style is very deeply connected to the dramatic traditions of the Bolshoi Theatre. Massine used the three main aspects of dance in the theatre: Classical ballet steps; folk and character dancing; and mime and grotesque… all combined’". The intricate requirements on the dancers with the "classical ballet steps", organised by Mr Ratmansky, appeared, to me, particularly demanding ( I am no expert, I must confess). The speed and detail required in the technique seemed to be formidably challenging. Certainly the dancing on the night I saw it, was concentrated and full of finesse. The combination of the character drawings required by the dancer/actor and the "jokes" in this ballet asks for a control and expertise that requires courage and tips into bravura, when embraced, to pull off consistently. The whole company earned the reception that the ballet received – it was danced at a knife edge and was relatively thrilling as a result. Ben Davis, Lana Jones, Laura Tong, Damien Welch, Andrew Killian, Matthew Donnelly and Daniel Gaudiello were impressive in the accuracy and the mad cap pell mell of the ballet. It is a little rude to single people out for it does require a fierce Ensemble concentration to work – that was evident from all. I thought this was a great "tiny" work –one that I would gladly watch again and again, when danced as well as this. However, the beautiful Designs by Hugh Coleman suffer, like the previous work, at the relative cramped space of the stage. I should like to catch the dance on the breadth of the Melbourne Arts Centre State Theatre or at the Lyric Theatre here in Sydney.

The final work on this program was DYAD 1929, choreographed by Wayne McGregor to Music by Steve Reich. The Set Design concept by Wayne McGregor and Lucy Carter; Lighting also by Lucy Carter and the Costume Design by Moritz Junge is very contemporary abstract. For a while it felt that the Sydney Dance Company had entered to share the program. A white back wall and floor with nine widely placed rows of black polka dots trailing from the height of the wall and across the floor towards the audience and an almost stage width yellow fluorescent tube lighting boom that descends and ascends during the dance, support flamboyantly but "cool" (in both the artistic and vernacular sense) looking costumes. The choreography is very geometric in its patterns and partnering of the dozen dancers. Exacting . I felt that some of these dancers were very technically comfortable with this work and others slightly less so. It didn’t hold my attention as grippingly as the Ratmansky work. I don’t believe it has to do with the very different approaches to choreography but rather the varying concentrated ease and confidence of the dancers in this more abstracted mode of physical expression. (Indeed, two of the dancers fell during the execution of the work. – There was also a fall in the first work (?))

I enjoyed myself enormously and had felt my time and money well spent. Thanks.
Posted by Pearly Productions at 6:32 PM

I'm glad that you enjoyed "Scuolo di Ballo", but there is a small mistake in your account: the ballet is not an arrangement, but a new composition that uses themes which may or may not be by Luigi Boccherini. As Françaix told me himself, when he was a very young man he received a mysterious commission to write and orchestrate a ballet in one week, using themes that were provided to him by the person who asked him to write the ballet. The mysterious commission turned out to be from the head of the Schott publishing house and lead to Françaix's longterm publishing arrangement with them.

It is not at clear whether the themes were actually by Bocherini or not, but it makes for a very charming ballet in a neo-classical style.

Thanks for writing about this!