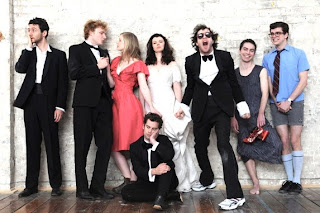 Arts Radar in association with B Sharp presents A MIDSUMMER NIGHT'S DREAM by William Shakespeare in the Belvoir St Downstairs Theatre.
In his program notes Eamon Flack says he “suspects there’s a production of [A Midsummer Night’s Dream] in Sydney every few months”. It is in fact, for me, the fourth production that I have seen this year. In all my theatre going life it may be the Shakespearean play that I have seen most often. In the case of this production Mr Flack and his company of fellow artists set themselves “the task….. to try to shrink the play’s form for the Downstairs Theatre while maintaining the size of its spirit…… We’ve embraced the spirit of Shakespeare’s play and therefore not the letter.” Indeed, I felt for the most part that was the case.

In the tiny space, the Designer (Alistair Watts) has provided a raised oblong platform on which a sward of green grass grows – weeds and all. Along the back wall a series of varying backdrops are revealed to take us to different moods, if not, also, locations for the play – from a shimmering silver curtain to a reflective mirror like wall, amongst several. The lighting (Chris Page) is flexible and adaptable to all the demands of the production. The costumes are simple and useful in identifying the different groups in the play and are clever in their simple statements of character changes – the choices are bold and we adapt and accept them. Sometimes we are deeply amused by them in the simple solution – the sticky tape applied to the face of the actor playing the double of Puck and Bottom (Charlie Garber) , for instance. The Design conception and solutions are deceptively enchanting in their devising and execution.

Even more spellbinding is the beautiful verse speaking – tonally played with for range emphasis (not just volume) and intelligent imaging and shaping at a speed that exhilarates the listener to make us listen to the poetry of this play, that is at once so familiar and yet, here, in this work, mostly, minted anew. I heard text and ideas that I had not known to be there before or I had forgot (probably the latter, yes....[I muse].... definitely, the latter.) The storytelling is therefore crisp and forces a need to grasp quickly to keep up. It was a terrifically immersive experience, for the most part. Katherine Cullen as Titania/Hippolyta, Kit Brookman, in a surprising casting as Hermia, are especially pleasing in this daunting task. (An aside: Mr Brookman’s casting, ironic, particularly as this theatre building has recently been quivering with the debate about the lack of female artists representation in all aspects of this theatre company’s work- doubly ironic, as I understood Mr Brookman was particularly perspicacious in his statistical analysis of the above dilemma, then, that he be usurping a role that in recent history is generally played by a member of the female sex is…bold, indeed!!!) Indeed it is unfair, perhaps, to single these two artists out, but, I do so because they were the most consistent in the fearlessly intelligent articulation of Shakespeare’s words and the dedicated propelling of the dream forward. All of the actors demonstrated this skill with great facility but some were indulgent in the physical expressions of their tasks and to me tended to “drop the ball” with the primary task of telling the story and indulged in overt comic shtick that halted the play and asked us to suspend our curiosity over the adventure and to admire the seemingly infinite invention of the “comically" adept. This is where Gareth Davies strayed from his good work, often, in the doubling of Demetrius/ Francis Flute – (This be in the Mechanical’s Interlude.) The temptation was often in need of discipline. Others were similarly tempted (Mr Garber) but were relatively tempered. The mechanical’s play of PYRAMUS AND THISBE is so famous (and infamous) for its comic treasures that to find a way to do it without covering old ground is formidable. To do it without the giving in to the temptation to “milk" it, a challenge. The discoveries here were not as interesting as some of the other sections of the play that Mr Flack had guided us to contemplate. Interpolations of contemporary pop music and vernacular in other parts of the production were for the most part aptly obtruded - no injury here.

Interestingly, overall, I felt that Mr Flack was going to say something arrestingly new about the play with his production, for it had some early striking textual clarity and shape, but somewhere it seemed to derail and move to the robust hi-jinx of the play’s usual elements. This was disappointing, for there were intimations that the company had ideas fermenting, that were more than just an “occasion [at] the beginning of Summer, 2009, in Surry Hills, with all its hunt for pleasure and craving for innocence and wondering loveless souls and instinct for entertainment.” For A Midsummer Night’s Dream presents a complex series of worlds that rub up against each other and interact with each other – “homely and realistic characters are placed within a fantastic, almost surrealistic, plot; the lowest level of society mixes with the highest; prosaic speech is uttered along with sublime poetry; and the supernatural, the human, and the bestial worlds comingle. And, like a dream, this dramatic fairy tale initially appears to be a trivial diversion that bears little connection to our waking lives. Yet, upon closer examination, A MIDSUMMER NIGHT’S DREAM reveals in disguised form, deep truths about our hidden emotional truths.”

My history for this play is long. I remember seeing the Royal Shakespeare Company tour or the famous Peter Brook production!!! A “grey” version with grotesque “fairies” in Munich sits for ever in my head. If this were the first time you had seen this play this might be a very pleasant memory to treasure, but for me, after an initial promise, it retreated to just another version with singular treasures sitting beside familiar tricks. Teasing in its promise and mixed skills. But then as Bottom says :”I have had a most rare vision. I have had a dream past the wit of man to say what dream it was. Man is but an ass if he go about to expound this dream.” It is or can be a tricky piece to do anew.

NB references are from the Notes of the program by Eamon Flack, the 1999 reprint of the Arden Shakespeare edition and The Friendly Shakespeare by Norrie Epstein.

Playing now until 20 December.
For more information or to book click here.
Posted by Pearly Productions at 2:23 PM