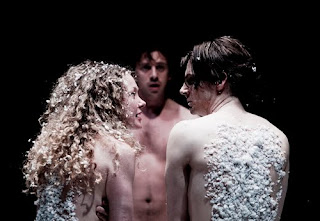 THE MYSTERIES: GENESIS is a new version of some of the stories from the Hebrew Bible (Hebrew Scriptures or Old Testament) by Hilary Bell and Lally Katz. What is very interesting and exciting is to have these stories: ADAM, EVE; CAIN, ABEL; and NOAH'S ARK to be re-assessed and re-told by two women in 2009. In my research, THE NEW ILLUSTRATED COMPANION TO THE BIBLE ( J.R. Porter - 2003) tells us that "In recent times, biblical scholars have tended to concentrate on the purpose and background of the Pentateuch in its final form...... they have emphasised that the final editors were attempting to convey a message tailored to the needs, hopes, and fears of people of their own time. The Pentateuch may be viewed as aiming to encourage and warn Jewish exiles faced with the challenge of returning to the Promised Land, and its themes can be seen as providing a program for the restoration of Israel." The material of the Bible has, then, always been a kind of tool to explain the present.

"Än attempt to convey a message tailored to the needs, hopes, and fears of people" of our time, 2009? (To asssure the religious, the question as to whether the material is true or false is not a concern to this project. Rather it is fascinating to see how these stories are still useful to us. The bible is definitely alive not dead, in this enactment, in search of our understanding of who we are or might be, now.) What are these two writers saying, explaining, telling us? Much discussion followed after, with my theatre going companions. Interesting that this essentially patriarchal book is being addressed by two women? Further, even more interesting to the outcome, is to have three men, then, direct this work for the STC. Matthew Lutton (EDEN); Andrew Upton (AFTER THE FALL); Tom Wright (THE ARK). More discussion followed on!! (Provocative that the Residents acting company are made up of 5 women and 4 men.)

It was a very provocative and stirring night in the theatre. I had known these stories from my Catholic childhood. In Primary school we had a text book dedicated to Bible History stories (It was big and fat and it is one of those books I wished I still had) and whole classes of enthralling reading with illustrations to further stimulate one's imagination. Of course, then, there were all those old Hollywood movies especially the Cecil B. De Mille sagas ,including THE TEN COMANDMENTS, which I saw at the Prince Edward Cinema in Elizabeth St (one of my first early treasured memories!!!) And later, the Dino De Laurentis/John Houston THE BIBLE, kitsch but still interesting, covering the essential Genesis stories, including the three above. So I went into this evening with quite a background. (Hollywood and other wise). Where as, my companion, did not know these stories at all. (Different cultural background, generation etc.) At the first interval, after the Adam and Eve story, I was slightly unhappy about what we had seen but my companion was fascinated and intrigued. Entertained. I was encouraged to let go of my literal reception of the stories and began to read the night as if it were all new.

Matthew Lutton, who directs ADAM, EVE, written by Lally Katz, has memories of his childhood vision of his Garden Of Eden as a place of snow, white snow. And indeed, the Set and Costume Designer, Alice Babidge, does create that for Mr Lutton and us. After a starting vision of GOD (Richard Pyros), in the play's prologuue, naked, creating the world and then a startling creation of Lucifer and his fall from grace - a beautifully lit (Lighting design by Paul Jackson) casacde of dirt, filthing the naked body of the actor (Brett Stiller), a crew empties a snow square on to the stage, an apple hangs from the roof. Adam (Cameron Goodall) is created and after interplay with a white Penguin (Zindzi Okenyo) one of God's creatures, God creates Eve (Sophie Ross) to keep Adam company. A tempter of Eve, a female version of Lucifer (Alice Ansara), leads Eve to taste of the forbidden apple of the Tree of Knowledge, and terribly, bloodily the innocence of the garden of Eden is lost, Adam and Eve discover their nakedness and they kill the penguin for covering and the blighted history of man begins.

The best of this act is in the brilliant design images that Mr Lutton and Ms Babidge have created for us. It often has the experience of a live installation art piece. Stunning in its imagery. Image after image, picture after picture engaged me in a totally hypnotic way. The text however did not have the same impinging power. It did not seem to have found its performance tone. Much of it was proclaimed. It lacked identity. Rather it had a symbolic impact. The better textual work, therefore, came from Mr Pyros and Stiller in the prologue, which was indeed mostly monolgal and godly instructions of creation and struggle. So, at this first interval there was a visual history of the project but in terms of the written word it lacked lucidness and clarity of purpose. I longed to read it, to give it more perspective, particularly as it was indeed a re-telling, a re-configuring of the story as I knew it. The directing emphasis to textual clairty seemed to need more address.

The second act, CAIN, ABEL directed by Andrew Upton, written by Hilary Bell dealt with the arrival of Death, in all its forms, among fallen man. Murder, suicide, old age. This act was played out by the actors on an emptied stage space occupied by most of the audience in promenade style (Some, did sit up stairs on the perimeter of the balcony). The characters acted their drama in our midst, in song and spoken text. We were moved, and shifted our portable positions to glimpse and observe, sometimes close up and some times only as aural intercourse acoss the crowded space. We were part of this world of preying Death but as invisible spectators, like ghosts, men and women possibly already passed. The novelty of the staging was disarming, and the final sung poems/hymns in amongst us, in stereophonic sound, was magnificently transporting. Once again, I would love to grapple more with the text - I would love to read it for clarity's sake. It was a "feeling" journey rather than a balanced one of textual objectivity and subjective experience. (It may have been different in affect on the remote balcony seats, above around the perimeter?) Ms Babidge, even here, in this audience engagement in the space created with her spare tawdry crepe paper and deflated balloons and pink flourescent lights, the right mood. The costuming, contemporary and brief, was apt.

The third act, NOAH'S ARK directed by Tom Wright, written by both writers was the most clear textually in performance action. On top of a pile of mattresses, Noah (Tahki Saul) contemplates and interacts with an unseen God who prepares him for the Great Deluge of the world of sinful mankind. Emzara, Noah's wife (Alice Ansara), finds his preoccupation disturbing. Mr Wright tells us that Lallly Katz "has imagined a different Noah, one who is seen through a different prism of febrile twentieth - century cults. To the world Noah seemed as insane as Charles Manson. The only problem was that Noah was right. God was talking to him." This imagery of the cult figure is re-inforced with the sons of Noah, in the bible stories, been replaced by daughters, and there is a tinge of incest that hangs over the storytelling relationships with the women in this version of the story. It felt odd and yet contemporaneously right. Much of this was due to the careful reading that Mr Wright got from Mr Saul as Noah. Much of the tension of the story was held charmingly and compellingly by Mr Saul.

The physical designs of the production were memorable. The Sound Design by Kingsley Reeve was also a great input to the magic of the event of the Mysteries.

Just how are these artists taking these old stories to interpret this world? In a recent Sydney Morning Herald article THE PURSUIT OF HAPPINESS ( December 18th-20th), Geoff Gallop quotes the Australian academic and social commentator, Richard Eckersley, "The young have picked up on the failure of modern society to offer meaning for today and hope for the future." and that "we live in a society where we skate over the surface of things. We prefer simplicity to complexity in the way we consider our needs and the ways we organise our collective lives..... We know there is a deeper reality to our make-up as individuals but its complexity frightens us." In this enterprise from the Sydney Theatre Company and with the apt generation of the Residents, some serious exploration seems to be being pursued. In this crisis of "Climate Change" and its possible consequences it is apt to look at the creation stories of the bible and see the world and tasks that "God" had set man. The sad history and then the destruction of the Deluge, came with the promise that "he won't destroy the world again, if, in return, humans obey strictures regarding their relationship to the natural world, and their consumption of it." So with our careful actions to regain an equilibrium with the natural world we could be saved? That is what "God" has promised Noah, is it not?

Is this the challenge of this work? If so, the text needs to be freed a little more from the imagery of the productions to speak with more lucidity. But this was a very interesting and multi-faceted night in the theatre. Good stuff to finish my Sydney year of theatre going on.
Posted by Pearly Productions at 10:25 AM