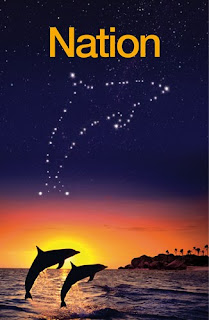 The National Theatre presents NATION based on a novel by Terry Pratchett adapted by Mark Ravenhill in the Olivier Theatre.

Over the past few years the National Theatre has had a program that has invested in the development of plays for young audiences and especially for the festive season of Christmas. Among them: HIS DARK MATERIALS, based on the Phillip Pullman trilogy of novels; WAR HORSE, based on the novel by Michael Morpurgo and now NATION based on the novel by Terry Pratchett.

This adaptation was given to Mark Ravenhill. An interesting choice, as we know his work (MOTHER CLAP'S MOLLY HOUSE, SHOPPING AND FUCKING and pool (no water), is very astringent, to say the least. Never less than challenging. I went with some anticipation. And so it is disappointing to report that the play is, indeed, a very bland time in the theatre. The task of adaptation is a very difficult thing to pull off. No-one will ever be completely happy and so it is with this. The novel may be just too BIG in many too many ways and it seemed to me while sitting there that it had become just one more staged scene after another scene, in a rudimentary and faithful narrative response. The story seemed to lack tension, the characters any in-depth development or real live interaction. There was no vital (sexual) chemistry with any one on stage. It was a long narrative with no one or too much to care about.

This is odd because the play has a mighty event of a huge tsunami that overwhelms a sailing ship and its passengers,only a few surviving, among them a girl called Daphne (Emily Taaffe) and her parrot, Milton (Jason Thorpe) and the destruction of some island cultures. Mr Prachett says he "began with an image, of Mau, [an island boy/man] (Gary Carr), standing on the beach in the chilly rain and screaming at the gods..... I wrote a book about an angry boy on the beach, and it became a book about a boy and a girl and a parrot, and about how people tend to be very similar to other people once you get past a few insignificant differences." In the year of Darwinian celebrations, cross pollinated with the need for world changes in how we as humans can interact with nature this story seemed ripe for pertinancy. Certainly the program notes were teasingly full of allusions and ideas that one could hardly wait to deal with in the production. But instead the play tended to reveal one more narrative melo-drama or cultural "sentimentality" in a very superficial way.

The Director, Melly Still has with her creative team, especially the Projection Designers (Jon Driscoll & Gemma Carrington) and the Lighting Designer (Paul Anderson), made some many splendid moments of theatrical magic: the tsunami wave overwhelming the ship and the consequent spillage into the depths of the ocean of the crew and passengers; the fierce struggle in the long boat between Mau and Cox and the red blood drenching into the ocean heralding the arrival of the shark; the beautiful puppetry of the "dancing" dolphins. The puppetry (Yvonne Stone) was, for me, all, fascinating, bewitching and moving. The music composition (Paul Arditti) or, at least, the orchestrations were not very successful in helping me stay in a place of island belief (the piano introductions, almost always distressing me.)

A very large company of actors played, sang and danced with great commitment and energy, swapping in and out of costumes (Dinah Collin) and responsibilities with great elan. Their energy, mostly, compensating for the relative lack of complex story telling or character development in the script. Gary Carr and Emily Taaffe as the heroes kept us engaged; Paul Chahidi as the villainous Cox fleshed out the psychosis of his character as best he could; the presence,dignity/integrity and economy of acting choices enhanced the work of David Ajala (Milo), Craig Stein (Pilu) and especially Bhasker Patel (Mau's father).

To be bold, as the Upton children mature, maybe we will see the Sydney Theatre Company giving out commission for similar production/play works for the Summer Holiday period in Sydney. I remember a time when the Old Tote Theatre Company and The Sydney Theatre Company were producing every Christmas/New Year break a production that was, at least, family oriented if not specifically for children (-much the preferred option). Certainly the London audience in the large Olivier Auditorium attending Nation, and over in the West End, New London Theatre where WAR HORSE has transferred for a very extended season, is filled with all aged customers, enthralled by the theatre going opportunity. It is a very vital audience for the future of the theatre. Grandparents, parents and children engaged in magic making with skilled storytellers and illusionists.
Posted by Pearly Productions at 5:00 PM