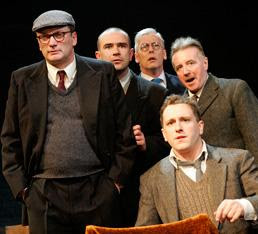 Live Theatre, Newcastle Upon Tyne was founded in 1973. "The company has defined itself as a 'new writing theatre' whose mission has been inspired by a quest to understand and interpret the social history and identity of the region it serves and to examine the issues and events that affect its people. This has created a profound well of source material and an astonishing array of stories; often personal and set against large historical, social and political backdrops that, despite their specific locality, are universal in their significance. THE PITMAN PAINTERS and Lee Hall are prime examples of this policy.......... Live Theatre's most recent transformation took the form of a five million pound (UK) redevelopment, re-opening in September 2007 with the first performance of THE PITMAN PAINTERS."

The National Theatre welcomed the original production in the Cottlesloe Theatre in May 2008. It was revived in the Lyttelton Theatre January 2009; second NT revival in September 2009 before a Uk and Ireland tour. The principal cast is unchanged since the premiere. It is certainly an impressive performance record.

I had read the play early in 2009 and found it to be a very inspiring text to engage with. Having the opportunity of seeing it performed with the original cast was an exciting expectation. There was no disappointment. The author is most recognisable to theatre goers as a result of his screenplay of BILLY ELLIOT and the later adaptation as BILLY ELLIOT THE MUSICAL, [music by Elton John]. (Some may know another of his plays, COOKING WITH ELVIS).

The play concerns the true life story of a group of Yorkshire miner's in the 1934 who organised their local Workers Education Association to have a class on art appreciation to move on from Geology, Evolution, and other such topics. Robert Lyon, Master of Painting at Armstrong College Newcastle (then part of Durham University), was seconded to this task. After a considerable trying first class where he had presented a lantern/slide show of details of the art in the Sistine Chapel, and realising that there was no point in doing so to an audience completely unversed in art, decided that the men should try making images of their own. "Lyon started them on lino cuts, reasoning that the business of gouging lines in resistant material would suit manual workers. And then a breakthrough: he and the class came to an understanding. Given a subject ('Deluge', say, or 'The Hermit'), each member would do a painting accordingly, to be discussed the following week. All at once Tuesday evenings became the focus of life outside of work. The Group flourished. Word of it spread to Newcastle and beyond." It became known as PITMAN PAINTERS: THE ASHINGTON GROUP. Today the works are permanently hung at Woodhorn Colliery Museum, Ashington, Northumberland and are world renowned. "Seeing by doing. Doing by seeing".

Lee Hall says, "Some things in my play are untrue... the most obvious untruth is that there were only five members of the group. Perhaps the most remarkable thing about the real story is that there was at least thirty people in the first register alone. My main characters - George, Harry, Jimmy and Oliver are based on their historical namesakes but inevitably bear aspects of other members of the group...... all of the pictures each character paints were in fact done by their historical namesakes, and perhaps more surprisingly virtually all of the events of the play are based on the truth." What struck Mr Hall most was that these ordinary working men found a means of expressing themselves and despite "the scantest of educations (came to write) knowledgeably about Cezanne and Picasso, and were ardent devotees of Turner, Ruskin and Blake....... fearless souls, confident to talk as equals to the best minds of their day."

What impresses Mr Hall is not only the physical achievements of these extraordinary men/miners/painters, but, also, their understanding of what it is that is gained in participating in the making of art other than financial gain. Further, what interests Mr Hall, is the group's avowed "unprofessional" status.

"The idea that art is somehow a commodity, that culture is something one consumes rather than takes part in, is, of course a very modern notion. The idea that an artist is someone who makes things to be bought and sold is part of this ideological shift and it is important to remind ourselves that art might indeed mean something more than this. That the group chose to make art both central to their lives but removed from the 'economy' of the art world seems very significant."

"Quite clearly the Working Classes of the early part of last century were aspirational about High Art. They not only felt entitled, but felt a duty to take part in the best that life has to offer in terms of art and culture. That fifty years later I could write BILLY ELLIOT, a story about the incomprehension of a mining community towards a similar aspirant to High Culture, seems to me some sort of index of a political and cultural failure. despite the advances in education and the blossoming of the welfare state, somehow we have failed to 'democratize' the riches of culture."

This then becomes the major dilemma of the play, in the climatic scenes of the second act, for the most successful or promising artist of the group, Oliver Kilbourn (Trevor Fox), is offered a stipend to be a 'professional' artist by an admiring patron, Helen Sutherland (Phillipa Wilson). His art is an expression of his daily life. It is vital to his work. To not to work as a miner may undermine his art? To practice as an artist only, might divorce the inspiration? What is valuable? The community? The art?

The action of the play follows the Tuesday classes that the Miner's Union has arranged with Robert Lyon (Ian Kelly) and moves to other locations as the reputation of the group expands. We have swift character presentations and then a series of scenes that are full of witty, earthy and piercing discussions of art and the movement/styles of the times of the play; the artistic connection of the art to the miner's lives and the manner in which they interpret their weekly tasks , 'Deluge', 'The Hermit' etc. The work is full of arresting argument and dilemma. Funny, serious and enormously intelligent.

The Director, Max Roberts, along with the Designer, Gary McCann have a realistic creation of the hall of the painters 'studio' augmented with pragmatic pull down screens on which the paintings of the artists are projected for long and witty analysis for the audience. [Lighting Design, Douglas Kuhrt.] To facilitate the scene changes the Sound Designer, Martin Hodgson, has created a thoroughly energetic soundscape of the miners daily work machinery etc to propel us forward to the next debate. The cacophony of the sound bridges are exhilarating and keeps one afloat with stimulation.The contrast of the worlds of this group of men are keenly delivered to us. Other locations, the home of Helen Sutherland, the studio of Ben Nicholson, London and Edinburgh etc are simply and quickly achieved. Economy and speed, the essence of the design movement of the piece.

What was wonderful on the night I saw the play, was the lively performances. The acting was "in the moment" and all the characters in action, not only 'physically', but especially in 'thought', all the time. Wherever one's eye travelled on the stage there was vital story telling going on. The capacity to register the listening (sub textual) dialogue of all the characters was thrilling to participate with as an audience. It was simply a wonderful demonstration of the actor's skills, to see this level of concentration and active commitment to the play, despite the fact that they have been engaged in performing this production since 2007. Nothing seemed 'acted', it felt extraordinarily improvised.

Trevor Fox played the principal role of Oliver Kilbourn (covering for an indisposed Christopher Connel). His work was a live set of restrained but energetic processes, bursting with possibilities of choice. Ian Kelly as the class outsider but enabler, the art master, Robert Lyon, was also impressive. The whole company complimented each other and the work . Deka Walmsley, David Whitaker, Brian Lonsdale, Michael Hodgson, Lisa McGrillis, Phillipa Wilson and Simon Markey. A masterful ensemble.

I did not simply applaud the performance, I was moved to call "Bravo" several times. It was a very exciting night in the theatre. After the two previous, relatively disappointing, National Theatre experiences, THE HABIT OF ART and NATION, this production clearly demonstrated the strengths of the National Theatre as an entity. Bravo, indeed.

*All quotes are from the National Theatre program. Lee Hall and William Feaver.
Posted by Pearly Productions at 9:15 PM