The Power of Yes 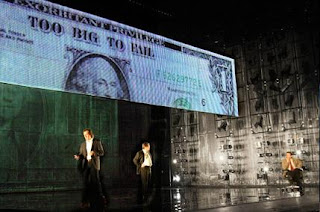 "In retrospect it is fair to say that the idea that banks could manage risk was a total illusion?"

"Capitalism works when greed and fear are in the correct balance. This time they got out of balance. Too much greed, not enough fear."

"It's like a ship which you're being told is in apple-pie order, the decks are cleaned, the metal is burnished, the only thing nobody mentions, it's being driven at full speed towards an iceberg."

On September 15, 2008, Capitalism came to a grinding halt. The National Theatre asked David Hare to investigate, urgently, and write a work that sought to find out what happened. He tried to find out the answer to the Queen's question to the London School of Economics: "Why did nobody see it coming?"

Following on from the success of the verbatim texts of Mr Hare: STUFF HAPPENS and THE PERMANENT WAY, David Hare met with many of the key players from the financial world and in September, 2009 delivered for audiences THE POWER OF YES. Another verbatim play, this one with 20 actors playing over 30 or so roles, to, as the sub-title to the printed text tells us, have "A dramatist seek to understand the financial crisis."

"If it's a play, it's a Greek tragedy. You're going along in a dream, and then the Furies arrive and boy, do they wake you up."

"I think the whole thing as a Shakespearean tragedy, and like all great tragedies it ends with bodies all over the stage."

On the full breadth and depth of the Lyttelton stage (Set Design, Bob Crowley), bare of all furniture and props, a gleaming reflective floor that mirrors the figures haunting this text (Lighting,Paule Constable), backed by several screens, hanging across the fly space of the stage, that are constantly shifting and glowing with supporting Video & Projection designs (Jon Driscoll with Gemma Carrington) of moving and still images, graphs, quotes and figures, a large group of actors, beautifully dressed, displaying understated wealth, enter and begin a dialogue with a character known as The Author, (David Hare, presumably) (Anthony Calf). The author interviews, chats, interrogates always curiously, sometimes calmly, clearly, amusedly, sometimes confusedly, frustratedly and even angrily, principal figures and observers of the unraveling of our market system. Mr Calf is a marvelous guide to the journey of the play. An immaculate elucidator of the process that Mr Hare has ordered for us, to try to give us some insight and clarity to this contemporary dilemma, catastrophe. In fact, all of the actors respond to their tasks with real authority and exude a confidence that helps us stay in the "swim" of the evening.

The play concludes with a marvelously witty short interlude, in the only furnished scene, in a private dining room,superbly luxurious, in a penthouse suite over looking Central Park owned by George Soros, a hedge fund manager and philanthropist (Bruce Myers), where The Author and Mr Soros talk of Alan Greenspan, who allegedly is in the thrall of Ayn Rand and believes in "creative destruction" and in explanation of his position, (positions) says, "The benefits of the market are so great that you have to live with the price." To which Soros replies, after losing a billion dollars, which annoyed him greatly(!), "Yes, but Alan, the people who end up paying the price are never the people who get the benefits."

The play is almost two hours long and played without interval and although, admittedly, any finance data or maths above the ordinary citizens daily needs (milk, bread, bus ticket and the infrastructure bills) are a bafflement to me, I was totally engrossed (occasional panics) with a fluid and beautifully paced production (Director, Angus Jackson). Dense with information and peppered with well balanced humour the evening was absorbing with stimulating and provocative information. Part of the ease, for comprehension, in the case of THE POWER OF YES, in contrast to STUFF HAPPENS, for me, was, that most of the real figures represented on the stage were strangers and so unlike the appearance of world stage characters of STUFF HAPPENS (Bush, Blair Rice etc), I was not distracted by the actor's imitative observations of real people characteristics and could stay wholly focused on the textual revelations and logic.

This is a terrific production of a dense and disturbing investigative inquiry.

Standing alongside the text ENRON by Lucy Prebble, the production by Headlong and the Royal Court, reopening in January in the London West End (Director Rupert Goold), the London audience has enough material to argue the perceptions of the Financial Crisis, over the supper table or well into the night in bed. I did. Both these texts are prime examples of the power of theatre and the social responsibilities that the art form can have for its community. Greek Theatre in action in 2010.

"Our system for regulating markets and prosecuting market crime is completely broken. If you mug someone in the market and you are caught, the chances are you will go to prison. In recent years, mugging someone out of their savings or their pension would probably earn you a yacht....
Let's have fewer terrorism acts, fewer laws attacking our right to speak frankly and freely. Let's stop filling our prisons with junkies, inadequates and the mentally deranged. How apposite in 2009 to have, instead, a few more laws to confront the clever people who have done their best to steal our economy." - Sir Ken McDonald. Director of Public Prosecutions 2003-2008. (UK)

"If you want good security, hire a thief." - Financial recruiter, explaining why disgraced bankers are being offered new jobs.

As we see the banks and corporations rewarding today, in January, 2010, their high flyers, for their achievements, this is theatre that informs the greater public in ways that might move them to action.

Belvoir is presenting this text later in the year in Sydney, directed by Sam Strong.
Posted by Pearly Productions at 10:26 PM