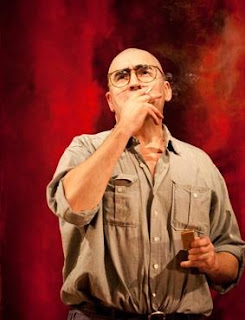 RED. A New Play by John Logan. Presented at the Donmar Warehouse.

This is a play for two actors, lasting approximately 100 minutes, without interval, by American, John Logan - (eg. Theatre: NEVER THE SINNER and film: THE AVIATOR, GLADIATOR, etc). It is set in Mark Rothko's studio at 220 Bowery, New York, during 1958 and 1959. A young man/artist, Ken (Eddie Redmayne) is employed to be an assistant/'dog's body to the artist Rothko (Alfred Molina). The job/role/challenge is accepted by the young man and the play charts the learning process of both men in the two years covered in the play.The significance of the time setting of the play is that it is in the period of Rothko's commission from the architects Philip Johnson and Mies der Rohe, who are designing the Seagram Building on Park Avenue. In this building, a restaurant called the Four Seasons, is planned and they have chosen Rorhko to paint a series of murals for the walls, for $35,000 (Think, approximately $2 million in today's currency).

A young apprentice and a blustering, opinionated intellectual/art practitioner in close circumstance. In gradual combat? The play could easily have just being a platform for the writer to quote or mouth off a whole lot of "Rothkoisms" about art and creativity to a pupil and reveal the usual gradual growth, of Ken, into a Pygmalion figure:

ROTHKO: You ever read Nietzsche? THE BIRTH OF TRAGEDY?

ROTHKO: You ever read Freud?

ROTHKO: Is that the question?

ROTHKO: You have a lot to learn, young man. Philosophy.Theology. Literature. Poetry. Drama. History. Archeology. Anthropology. Mythology. Music. These are your tools as much as brush and pigment. You cannot be an ARTIST until you are civilized. You cannot be CIVILIZED until you learn. To be civilized is to know where you belong in the continuum of your art and your world. To surmount the past, you must know the past.

There is more like this throughout the play, but, fortunately, Mr Logan has written a young man with brains and courage and spunk and the play develops into a fierce battle of becoming equals. It is bristling with ideas and illuminating debate in it's five scenes. It also reveals the human passions of both the protagonists and we do come to care for these two figures, not just admire the intellectual jousting. It is a most satisfying experience. (Enough for me to hunt out the text for my library.)

But what makes the experience of this play outstanding is the production by Michael Grandage who with his Designer Christopher Oram have created, in the Donmar space, a palpably real working artist's studio. Mr Oram has created on the outer fringes of the stage space a realistic 'pile up' of the bric-a-brac of the artists mess: Sinks, buckets, paints, cloths, brushes, cleaning jars, furniture, debris, so convincing that one could almost smell the room. Famously, the Rothko working space is bereft of natural light and the lighting is craftily scaled to allow Rothko to see his murals as the 'pulsating' light source of the room. The Lighting Designer, Neil Austin, exemplary in his effects. No more so than when the ugly fluorescent is switched on and the contrast is startlingly vivid of the artistic aspirations of the artist and the necessity of his will. We long for the restoration to the febrile gloom of the living cave that is Rothko's creative space - it is with gratitude, when it happens, that we exhale our held breath of wincing visual shock.

But it is not only the Designer's dressing of the periphery that is memorable, it is what he and Mr Grandage have invented in the action of the play. On the back wall of the central space huge 'glowing' half finished and/or finished canvasses are stacked (What fun Mr Oram and his assistants must have had to create the density of this output - it is very convincing) and in the pre-play moments, hung from pulleys high in the roof, hangs the latest work in creation. A brooding Mark Rothko, in chair, cigarette in hand, eyes it off, meditates.

Mr Grandage and Mr Oram have the actors lower and unbuckle, from the pulley system, the canvasses, move and replace them with others, usually to the powerful foreground sound of Classical music. (Sound Design and Composition, Adam Cork). We see Ken making frames, we see him stretch a canvas, we see both of the men mix and create the paint colours in buckets and in an astounding theatrical sequence we see both these artists, together, to a Gluck aria, prime a canvas with fat brushes. Swathes of "red" - plum coloured paint, splat out over the white canvas, and, when finished hangs glowering in an invitation to the imagination of the viewer, of the Greek Tragedy potential of it all - " to be about despair, doom, entropy, the void and oblivion.... freighted with potential significance." The Gluck, the lighting, the glowering canvas in the dim of the studio, and the now heavily red splattered, drenched artists, bodies heaving and sucking breath with the effort of the work, slightly swaying with dripping brushes, puddling slightly in pools of what could be blood, could represent any of the assassins of the canon of the Greek Theatre classics. Theatrical magic of a totally thrilling kind.

It is this creating of a working studio harnessed to powerful metaphorical images that lifts an interesting text into a high culture experience. The depth of concept by Mr Grandage and his team and the convincing integrity of every choice is entirely satisfying.

Besides my own personal opportunity to spend time in an actual artist's working studio, the Scorsese sequence LIFE LESSONS (with Nick Nolte) in the NEW YORK STORIES film and the 2002 Ed Harris bio of Jackson Pollock in POLLOCK are the nearest I have seen a replication of the energy of such live spaces. In the witnessing of the priming of the canvas in this production the feeling of the possible ecstasy of the primal forces of creativity are given to a theatre audience. That sequence alone is worth the ticket price.

The performances of the two actors are highly charged and primed. Mr Molina gives a performance that displays the ego and arrogance of this painter with relentless power, he also gives, beneath the tiger/peacock displays of temperament, the artist's uncertainties in his own vision and the insecurities that the rising new generation of artist (Jasper Johns, Frank Stella, Robert Rauschenberg, Roy Lichtenstein and Andy Warhol) is confronting him with. The premonition of the choice of suicide, as a solution to the dilemma, that is presented to us, late in the play, is shocking and deeply moving in it's execution by Mr Molina and Mr Grandage.

But just as interesting and ultimately powerful is the edgy and feisty temperament of the "apprentice", as Mr Redmayne uncoils it through the spine of the text, culminating in a stunningly satisfying confronting and personally challenging attack on the foundations of the Rothko testaments in the last scene of the play. Mr Redmayne is a young actor of some conviction.

ROTHKO: Because I'm sick of you -

ROTHKO: BECAUSE YOUR LIFE IS OUT THERE!

ROTHKO: Listen, kid, you don't need to spend any more time with me. You need to find your contemporaries and make your own world, your own life..... This is a place for doomed old men..... You need to get OUT THERE now, into the thick of it, shake your fist at them, talk their ear off.... MAKE THEM LOOK........ Make something new.

Certainly, reading that, on the page, here, it sounds the usual cliche for the end of an educating story, but it is no less true and in this production it has the weight of a great lesson for life, in a theatrical production and acting of the highest skill and integrity.

Seeing Rothko paintings in books in reproduction baffled my appreciation. Seeing some of the work in the New York Museum of Modern Art was truly another thing. I seek out his work, now, to take it in. This play only adds to the appreciation.

I made a clear effort to get to this theatre on my holiday in London. As a reader of the world theatre scene, the Donmar Warehouse, which is, indeed, a tiny space, has acquired, in recent years, a reputation of enormous influence. It is an enormous influence. Earlier Sam Mendes and now Michael Grandage as Artistic Directors have garnered a powerful position in the English speaking world for this company. It is a lesson, that not Size or Scale but Talent, Skill and Vision, Persistence and Patience will reap standards and reward.

Hi Kevin.
It's been great to read your London blogs and get a taste of the performances. I was in London for 24 hours the other day - looked over the shows that were on and wished I'd time to see them.
Thanks.
CT