The Book of Everything 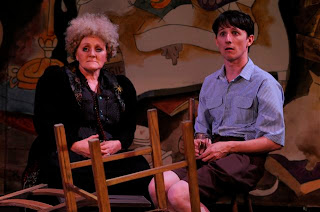 Company B Belvoir and Kim Carpenter's Theatre of Image present THE BOOK OF EVERYTHING. The Play. Adapted by Richard Tulloch from the Novel by Guus Kuljer.
A few weeks ago writing about WAR HORSE and NATION, two projects that the National Theatre in London developed, with young audiences in mind , I "boldly" suggested that perhaps the STC could begin to be more enterprising in that area with the special commissioning of such like work for Sydney over our long festive summer break.

Well, blow me down, there was I at the Belvoir on Saturday afternoon (after fearing I wouldn't get a ticket - it was so booked up. I even offered to buy standing room!!!) with an audience of Children of All Ages and Kinds having one of the most Exquisite and Best times in Sydney Theatre for a long time. And, of course my memory was jogged, that Belvoir had commissioned with the Sydney Festival (I think) THE ADVENTURES OF SNUGGLEPOT & CUDDLEPIE at the Theatre Royal a few years ago. ( Not so good, I remember.)

Richard Tulloch, himself, a well established and honoured writer (sometimes performer), has written for Theatre of Image under commission before (eg THE HAPPY PRINCE). He writes in the program notes: " When I read THE BOOK OF EVERYTHING, I loved it (too). It is remarkable how a slim book can say so much about the difficult topics of facing fear and violence, finding strength and happiness, and questioning religious beliefs. These themes may not be the usual stuff of children's entertainment, but (Guus) Kuijer never shies away from complexity. Like all the best writers for young people, he trusts them to do some thinking...... I don't know the details of Kuijer's childhood, but I know he was born during the war (World War Two), grew up in a religious family and that, like Thomas, he gradually came to question the ethics of stories in the bible....... Children do think about these things...... If it is appropriate to tell children these stories, and I'm sure it is, we should encourage them to consider when and why they were written, to question how they relate to their own lives and to form their own opinions about their meaning."

The Novel author himself says: "I can't remember that God was ever a topic of conversation for us children. I mean in the street when there were no adults around. That is remarkable, when you consider our lives were saturated with GOD..... But in the street, that whole pious world disappeared over the horizon. We were cowboys or indians, Ivanhoe and Robin Hood, cops and robbers, never Jesus."

"My father heartily looked forward to the second coming, and prayed regularly and fervently, 'Come Lord Jesus, come soon!' And I remember as a child I thought, 'Yes, but not until after my birthday.' "

"I can't remember any child who saw anything in the return of Christ, because to look forward to that is to look down on the life that we have here on earth. Our prayer was always 'Stay where you are Lord Jesus, and don't move!' Children love life, you know, and so they should." - Guus Kuijer from "Why Children Play Cowboys, But Never Jesus."

(It is with this observation that I reflect back on my own fifties childhood and recognise the games played by Mr Kuijer and his friends, especially cowboys and indians, to which I would add the Roman saga of Christians being eaten by lions in the Coliseum and Montezuma and the Aztecs, making human sacrifices, pulling out the pumping heart of victims dripping with blood, in the half finished foundations of the new housing commission houses about us in the North Ryde neighbourhood. (The movies and black and white television, the source of our Hollywood History of the World, inflamming our imaginations and spontaneously created by all us kids in the half developed Australian suburbs-bush, market gardens and new fibro houses!!) Like Mr Kuijer, Jesus, didn't appear in our games, but not because his story didn't awake our imaginations but because we had been strictly taught that it was a SIN to even say his name out loud, except in prayer. So no Jesus stories except in school and church. Mind you Ramses and Moses would appear. The technicolour world of Cecil B De Mille's THE TEN COMMANDMENTS insisting on being brought to life. Yul Brynner and Charleston Heston. Anne Baxter quoted by us gamsters: "Moses, Moses, Moses!" around the green statue of some Egyptian god made out of an old blanket, standing, wrapped around a broom handle on fruit crates).

In a space painted ultramarine blue, always creating a timeless feeling of infinity, Kim Carpenter has designed and built "a large copy of Thomas's book, THE BOOK OF EVERYTHING, standing upstage centre. Pages (are) turned during the performance to reveal naively painted representations of each of the different locations." These illustrations are simply enchanting, (Some of them are reproduced in the Currency Press copy of the play - recommended as a steal, at $10 each) and were alluringly suggestive to my imagination to embrace the world on stage as my reality. It is a wonderful Design solution, because the "naive" rendering of the paintings are so contrasting and yet so compatible to the sometimes harsh and violent actions of the play that the within the balance of fantasy and reality there was a creative choice for the watcher. If the atmosphere of the action on stage became to tense in the narrative, and Peter Carroll as Father is formidable to encounter indeed, emotional relief can be found in regarding the fantastic environs that Mr Carpenter has created.

The costume designs, again by Mr Carpenter, are magical and apt (eg the vision of the local "witch", Mrs van Amersfoort (Julie Forsyth) , in every detail from foot to face makeup and hair, is inspired. The dyed hair of Mr Carroll to create this Father truly, cruelly accurate in its essence to inspire austerity and accompanying fear.)

The lighting design by Nigel Levings is so beautiful and often so ravishing to the eye, in the design environs of Mr Carpenter, that to freeze frame the action to give more time to contemplate the images became a real desire. The Music Composition by Ian Grandage - he is also the versatile live musician - along with the Sound Design of Steve Francis is also a major element in the experience of this production: JOY.

The cast have created characters that fully live and are carried home, indelibly, in the memory. The Choreography by Julia Cotton and her guidance to some of the physical solutions of detail of character are both perceptible craft and invisible accouterments for the actors. A delight.

Matthew Whittet (Thomas) following on from his performance of SILVER in Downstairs this year, simply compounds for us to appreciate, his enormous skill and appeal, not only as character but as artist. Physical, vocal and spiritually, too. He has a charismatic essence that all of us KIDS in the audience wanted to identify with. Objectively watching the actor at work is also inspiring.

Julie Forsyth is overwhelmingly warm and delicious, our fantasy adult figure/saviour - also has that special spiritual transcendence for me as a performer. Alison Bell playing the mean big sister to the hilt, who becomes, most unexpectedly, our heroine of defiance, is wonderful. Yael Stone, a little too absent from our stages this year, after her terrific year, last year, is gorgeous as the girl with a leather leg with the squeak, Eliza. Peter Carroll creates unswervingly a fearful and yet oddly pitiable figure as the Father and contrasts this demeanor of his actor's psyche with the immensely funny Bumbiter. Deborah Kennedy a pants wearing, eccentric, bicycling aunty, a wish fulfillment of the relative, we all want (or had). John Leary as Thomas' personal empathetic vision of Jesus is subtle, funny and wisely human.

Neil Armfield the Director of this work, creates a seamlessly comfortable production, where the actors talk and engage with us as actors, fellow-conspirators (The Frog Plague!!) speak as narrators and transform into blissfully beautiful people that we all want to be our friends to play with. Every element is almost perfect.

Maybe smaller in production scale than NATION or WAR HORSE at The National Theatre in London, THE BOOK OF EVERYTHING is a young person's production, like those other two, that is a great theatre experience for all of us kids (no matter the chronological age) in the Belvoir Theatre. Every individual involved has a gift and all of them have been given the opportunity to use those gifts WELL for the story telling to the "tribe" each day, in that magical space. Their utilised treasures of gift, talent and spirit are a boon for us lesser mortals to translate into highly imaginative creatures, too.

I hope the production has an extensive life after the season here. Do go when you can. Highly recommended.