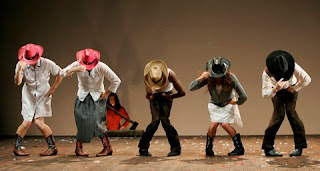 The first performance of GISELLE took place in June 1841 at the Paris Opera. It was conceived by the poet, author Theophile Gautier, inspired by Heinrich Heine's work, De l 'Állemange, where he came across a passage concerning "the snow white wilis (spirits of jilted brides) who walz pitilessly the whole night long" and lure and dance to death any who come their way during their dark haunting of the night. The music was sketched in 8 days and scored in 3 weeks by Adolphe Adam. Carlotta Grisi was the first Giselle.

Giselle, a frail young peasant girl,has a besotted village suitor, Hilarion. But a prince, Albrecht, chances to see her and disguises himself and woos her. She falls in love. Hilarion in a pique of jealousy reveals to her the origin of her lover and she suffers a shock that kills her. Later, Hilarion visits at night the grave of Giselle and is met and entranced by the wilis of the cemetery and is danced to death. Albrecht too, approaches the grave site but Giselle protects him from the walz of the wilis until the sun rises and he is saved from Hilarion's fate. She fated to the world of the wilis.

The ballet was a great success. "Giselle offered an escape to the world of mystery, beauty, danger and death, a vision that stirred the blood of poetic as well as prosaic imaginations." However, "What secures its place (still) in the apex of romantic ballets is that in place of the usual happy ending, in which virtue is rewarded, a tragic death followed by a ghostly resurrection is substituted.

This then is the Classic Ballet.

This version has been created by a contemporary company called FABULOUS BEAST. To quote from the Festival program in an essay by Manchan Magan: "Who is Fabulous Beast? They are a dance theatre company, which can mean anything from the play-thing of an ego-maniacal director, to a way of branding uneven work under a saleable name, or a haven of relative stability for wandering dancers. In the case of Fabulous Beast the dance theatre company is a way of being in the world, an ethos that infuses the minds and bodies of the members of the company. They are a community of diverse performers from five continents who are based all around the world, but who gather together in a cowshed in the Irish midlands to develop performances under the guidance of Michael Keegan-Dolan, a pure-hearted, fearless and visionary choreographer."

The work they produce is theatrical in that it is rich in the hybrid of form that they engage in: The spoken word- text of the actor's realm. The physical dance techniques of the variously trained dancers: Classical or otherwise. Two of this company of Giselle, for instance, are not even dancers. One works as a narrator, exclusively, perched on top of a telegraph-like pole as Tommy McCreedy, Giselle's father (Bill Lengfelder). He is an actor. The other an actor/mover, Nurse Mary, trained at Ecole Jacques Lecoq, Paris. (Mikel Murfi.) Another, who plays Bridget Mulrooney, (Angelo Simimmo) has a double gift of dance acumen and an impressive falsetto voice. "Whether the performers are acting (Most using English as their second language, impressively) , singing or clowning, they do so with grace, intensity and (the) integrity of physically-trained, body aware performers." The combination of the juxtapositional concepts of dance and theatre in this performance of Giselle, are the most successful meld that I have experienced. Usually, for me, when dancers speak, it appears to me that not enough time had been given in rehearsal to give the dancers confidence to do so - this is not the case here, I was not distracted out of the performance with unconfident vocalisations.

This GISELLE, premiered in Dublin in 2003. It is part of a trilogy of works whose primary concern "are the strains and struggles of the human condition, and a secondary theme running through them is the reaction to the radical social upheaval being experienced in the Irish midlands as a result of new prosperity (Now, in 2010 in doubt as a result of the recent collapse of the Money centres about the world), foreign inward migration, shifting sexual mores, erosion of religion and increasing reliance on medicine..... They take on the hypocrisy of modern society; yet there is always a hint of redemption."

To expect the romantic version of Giselle is to lead to disappointment. The first act of this theatre piece has a great deal of dialogue and it reveals the cruel and bleak world of this village in text as blackly mean and funny as you might find in a play by Martin McDonagh (The Pillowman, The Lonesome West). 11 performers and only 2 women. Men role play women in dresses. The cruelty and ugliness of this world seems to be doubly compounded. The Irish world does not appear in glamorous terms. Michael Keegan-Dolan, in an artist's talk after the performance I attended, talked of the landscape of the site of his company's practice as hostile, flat, barren and wet. Very wet. This is reflected in the imagery of the creative team. The spare setting, a bare stage with a stark vertical telegraph pole initially silhouetted against a pale back cloth, the dour costume colours, (Sophie Charalambous), the lighting (Adam Silverman), the music covering a wide range of pleasant, sometimes tuneful but also uncomfortable aural composition (Philip Feeney) all conspire to create a world of prejudice, petty meanness and depression with occasion bright energies attempting to emerge. The sound of the line dance, the red shirts and skirt and some jaunty hats. The only female performer for most of the piece is the Giselle (Daphne Strothmann) and the weight of the ugly world forces her to an asthmatic wheeze. It is a relief when in this world of abuse, Albrecht (a stranger to this village), "a bisexual line dancing teacher from Bratislava" (Milos Galko) shows some level of kindness to her. Following the libretto of the classic ballet however, treachery occurs and Giselle dies.

As the work gathers action, the spoken dialogue gradually disappears and the principal mode of expression is through the dance movement. There is no choreographer credited in this work, rather Mr Keegan-Dolan is credited as Director. In his artist's talk he talked of his creative process which always began with images. From this he watches his dancers/actors move and builds from their unique body language. Or he sets tasks, for instance, the line dancing comes from the research of the Milos Galko (Albrecht) and Vladislav Soltys (Fat Mary), and so it is a mixture of the American line dance with these two dancers heritage shinning through, Slovak folk dance - entirely original. Built from the dancers, and Mr Keegan-Dolan's close watching and "dreaming", the work result, Mr Keegan-Dolan believes, comes from the spirit of the artist seeking a way to express his dramatic impulses, from the inside of his collaborators, and has an energetic spirit of truth that a mirror watching form perfectionist might never achieve. To my eyes this led to a dance style that was liberated and infectious in the ensemble and individual forms of various combinations, if a little rough. This dance style seems to me a less formal expression of dance techniques, classical or otherwise and rather a life like surge of a physical life force. Infectious.

The second half of the work moves to the graveyard of the village and the wilis (Emmanuel Obeys, Neil Paris, Alex Leonhartsberger and Rachel Poirier) of this Irish village appear in ghostly white costume and flour white bodies. Ropes drop from the roof and the dancers begin a ballet of flying and entwined spinning.Beautiful and breathtaking in its execution. Hilarion (Michael Dolan) visits the graveside and is greeted and danced to death by the wilis. Albrecht appears and is saved by Giselle from that fate. The last image of the piece is of Giselle attempting to defy gravity and escape into the skies, but inevitably no matter what height she manages, she returns to earth, destined to haunt the village of her tragedy. The final moments of the music score by Mr Feeney incorporates the dying romantic musical motifs from the original Adolphe Adam GISELLE. I found it immensely moving. It had a similar affect on me as the glorious similar gesture in Australia Dance Theatre's BIRDBRAIN, where the music motif and a visual image of one of the great interpreter's of Odette/Odile appeared to join the contemporary work to the inspiration of history of SWAN LAKE.

There seems to be some dissension about this work among Sydney Festival goers. I loved it. Fabulous Beast has been described as "one of the most daring and highly original dance theatre companies in the world". GISELLE, Itself was nominated for the Olivier Award in 2003. I felt it was deserving of such honour and certainly as a theatre company of such hybrid skill applications, the best dance focused theatre company that I have had the pleasure of watching. Their last work was THE RITES OF SPRING. Interesting to ponder what they wrought from
the sources of this famous "modernity".

For more information click here.
Posted by Pearly Productions at 12:25 AM