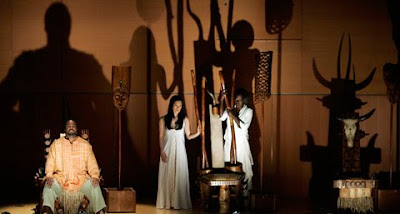 I need to declare that I do not have any expertise in this field other than as an enthralled attendee at selected music concerts. I do not go to the concert hall as a matter of course but as a dilettante who either knows the work well or wishes to explore the composer or artists and their contribution.

I do hold Stravinsky high on my curiosity chart and am not greatly sophisticated in the range of his composition. Most of his scores that I have "with me" are the usual ballet scores. In the last year the Australian Ballet gave us PETRUSHKA and FIREBIRD, in its FIREBIRD AND OTHER LEGENDS program, last April. The hearing of the score was the greater part off that evening's offering. I had never heard these Stravinsky scores live and never seen, live, the work of Mr Sellars, so was drawn to spend and attend.

Oedipus Rex is an opera-oratorio after Sophocles by Igor Stavinsky scored for orchestra, speaker, soloists and a male choir. The original libretto, based on Sophocles tragedy was written by Jean Cocteau and then translated into Latin, although the speakers text is given in the language of the audience. The first performance was given in May, 1927, in Paris.

This production is Directed by Peter Sellars and is a re-staging of the Los Angeles Philharmonic production (2009) with the singing cast mostly in tact. Roderick Dixon (Oedipus), Ryan McKinny (Creon, Messenge, Tiresias), Daniel Montenegro (Sheperd) joined here by Yvonne Kenny (Jocasta) and Paula Arundell as the narrator (Antigone - very broadly Australian in its very intense rendition), and Elma Kris as a dancer/mute (Ismene). The Sydney Philharmonia Choir, male section (under the direction of Brett Weymark) and the Sydney Symphony conducted by Joana Carneiro.

The flat stall section in front of the concert platform is where the orchestra is sat. On the concert platform a six foot platform stands, on which sculptures, (Ethoipian: Elias Sime- mostly elaborate furniture [thrones] are sat to be used by the performers. Beneath, on the actual concert platform the male chorus gather to comment on the action. Mr Sellars has the choir engaged in busily elaborate sign language during the singing. They are dressed in jeans and a variety of blue shirts/T-shirts - a contemporary image of blokes around the back yard. The principal cast are also dressed for today, except Jocasta. (Costume Design: Dunya Ramicova.) It is sparingly lit. (James F. Ingalls.)

The singing and the musical contribution of the orchestra is powerfully effective. The staging by Mr Sellars is less than inspiring.

After the interval the full choir, male and female, now casually dressed but with green shirts, circle the orchestra and still using signed language signals sing the Symphony of Psalms. The staging of this concert work, which has church liturgical revelations and relations, continues the story of Oedipus in dumb show above on the concert platform. The juxtaposition of the two intentions of Greek tragedy and Christian lament/ praise 'to the Glory of God" is oddly compatible.

The singing of both pieces was sublime and truly a satisfying experience. The musical excellence did not need, in my estimation, the vision of Mr Sellars' staging. Indeed sometimes it was a distraction - certainly the costume solutions were disconcerting. Bravo to the conductor Joana Carneiro and the Choir director, Brett Weymark.

There were fears that this Festival offering was not selling. At a top price of $189 plus a booking 'tax' by the House to make it totally $194, one can quite understand why.

I am with you in this. Musically, a treat; dramatically, a bore: well, OK for the oratorio, but a dreadfully unnecessary distraction for the Symphony, which has, in its third (and last) movement, some of the most sublime music written in the 20th century. The playing and singing, however, the choir particularly, reached the sublime. Brett Weymark has worked wonders in his short time with the Philharmonia.

To treat Oedipus as a sort of Christ figure seems to me me to be confusedly wrong-headed: whatever religion Oedipus practised, it was certainly not Christianity; and all to the accompaniment pf Jewish psalms ...

Shame on the Festival for promoting the evening as 'a rarely performed double bill'. The two pieces do not belong together in any sense that Strawinsky would have recognized; indeed, he may have objected to the attempted dramatization of the Symphony. The contorted conceit is Sellars'.