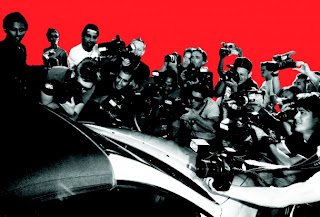 Steven Soderberg has one of the most impressive list of achievements as writer, director and producer of contemporary film. Besides his own Directorial work which includes impressively for me, particularly, TRAFFIC and the recent release THE INFORMANT; the producing credits on such works as I'M NOT THERE, MICHAEL CLAYTON, SYRIANA and GOOD NIGHT AND GOOD LUCK are fairly awe inspiring. Important contemporary films with political observation and dramatic clout. Education and entertainment. Well worth watching more than once for lots of reasons. Artistry and integrity supports and "glows" around the product of the artist's endeavours.

TOT MOM has been created by Mr Soderberg as the "Surprise" and last production of the Upton/Blanchett first season at the Sydney Theatre Company. Apparently, entranced by the present American television media and its output, Mr Soderberg has developed a satirical observation of the "news programing" that is such a 'noisy' part of daily air space in the USA. Using a contemporary and still unravelling alleged murder and trial of a mother of a child, Casey Anthony and her tot, Caylee, he has compiled a verbatim text, focusing on a real life television news pundit, Nancy Grace and her show. Mr Soderberg focuses and covers the sensationalising escalation over an 18 month period of the revealed and discovered details of the case, both big and small, seemingly significant and insignificant. It shows the media creating news as "infotainment". The play presents a purported news and law expert fronting a news program and building ratings and profit, I presume, out of scripting, in the most sensational and mostly superficial manner, the real life tragedy of a young woman. Nancy Grace's persona is one of deep concern (satirised horrifyingly at the end of each "act" of the text with a deeply felt moment of acknowledgement for the passing of a war veteran in the current war zones.)

Certainly, having lived and worked in the USA, I have watched, hypnotically, daily, the trials of OJ, the Unabomber, the Oklahoma Bomber - Timothy McVeigh, blow by overblown sensationalised breath and detail of all elements of the trials and all who participated around them. The relatives, the friends, the witnesses, the prosecutors, the defendants, the jury, the judge, the spectators. The evidence, the tactics and strategies, all seriously speculated about and imaginatively extrapolated. Is it admissible or not? No tears, oh gosh, what can it mean? Here is our psychological expert who will now explain that for you. Is it a sign of guilt or not? What, in your expert opinion do you make of it "Dr Bethany Marshall ?" The likelihood of guilt changing by the minute to minute breathless reporting, like a contemporary Agatha Christie examination and revelation of clue after clue in the climax of a fictional crime. Guilty or not guilty. Tune in after this commercial. Tune in tomorrow when our expert panel will dissect the latest up-to-date developments for you.

An Australian audience may find it a fairly new experience or an exaggerated one. Maybe not. The recent news of the latest FOX Television News persona developments point to the trivialisation of significant world events to capture ratings and therefore profit. Style and form over sobriety and truth. (Look at the Channel 10: The 7PM Project, daily and see perhaps the creep towards our own cultural slide.)

The stage proper,(Set, Peter England) has a glossy backdrop, visually supporting a raised platform set up with chairs. In front of the platform and moving out to the front row of the audience is a "pool/swamp": water and weeds and garbage, which later develops into the naturalistic scene location of a possible crime, (a baby's decaying body in a plastic bag is found!) crawling with forensics, cops etc with black and yellow crime scene tape. Hanging above the space are four large but differently scaled screens, on which the live video image (Steve Toulman) of the Nancy Grace character (Essie Davis) is broadcast. (Ms Davis must be in a "studio" space backstage and conducts the scripted program of the play with the other actors via a video link.) It is an amazingly well sustained performance, in all of its head shot detail. Ms Davis is immaculate in her creation. (It must be very difficult and lonely.) The other nine actors sit on the chairs on stage and move into three differently coloured spots (Lighting, Damien Cooper) to impersonate a huge range and cast of character, from the investigation that the television company is following, is inventing, directly out to the audience.

The play is only ninety minutes long and accumulatively it does seem to lack real narrative and tension development and once one becomes wise to the conceit of the material presentation and the aim of the technique (satire) it becomes a bit becalmed and lacks and really forward tension to keep one involved, other than, speaking of my own experience, "mildly amused".

Oddly, the studio sound affects have been muted or edited. I mention it, because one of the major memories I have of this broadcast mode, which I mentioned above, is the 'pumped up' sound compositions that blare out in every non-verbal space and as background to the introductions. In this production the air around the spoken material goes dead and the impetus of the studio noise-push is negligent. The whole impetus of the scene in the play drains away.

We get the objective of the play and its construction and hang on in for the twists and turns. THE INFORMANT, the recent film with Matt Damon directed by Mr Soderberg, has similar dramatic tactics with deliberate reiterated scenes, however just as one begins to turn away from the film experience, a new layer of intrigue of the informant was peeled back and gradually one becomes hooked into the mystery of what motivates the "hero". The puzzle of what is this guy doing and why, arrests you. This does not happen in TOT MOM.

What does happen in TOT MOM, as in all of Mr Soderberg's films, and what kept me "mildly amused" (for most of the time) was the sterling work of the acting ensemble in their thumb nail but accurate character choices. Vocal and dialect characterisation, combined with clean and expertly drawn physical characteristics. The transformational skills of the actors were economic but wonderfully observed and wittily sustained. Wayne Blair, Zoe Carides, Darren Gilshenan (Finishing a very inventive and impressive year of creativity in Sydney Theatre, with a range of spot-on characterisations, here), Glenn Hazeldine, Damon Herriman, Emma Palmer, Peter Kowitz and Rhys Muldoon are all terrifically convincing and the cause of my admiring amusement of their, seemingly, infinite invention.

TOT MOM was only just interesting and ultimately a very obvious theatrical statement of a very "injured" industry. A disappointment. The acting skills of all the performers were what kept me present.

In the list of films made by Mr Soderberg is SOLARIS. A remake, shot by shot of the Tarkovsky original. If The television industry and particularly the News Media Department is the satiric target, I thought a stage version of the Sidney Lumet film of the Paddy Chayefsky script NETWORK would have been much more amusing and still tragically accurate choice. Try recreating it, but for the theatre. It would be devastating to see Essie Davis have a go at the Faye Dunaway role (Diana Christensen), Wayne Blair perhaps as Peter Finch (Howard Beale), Darren Gilshenan as William Holden (Max Schumacher) and Damon Herriman as Robert Duvall (Frank Hackett). I am sure that Mr Soderberg could do it and I know the impact of the targets hit in that text are truly great. Pull out the film on DVD or adapt it for the stage. Next time round? Ha.

Playing now until 7 February.
For more information or to book click here.
Posted by Pearly Productions at 6:42 PM