The Beauty Queen Of Leeanne 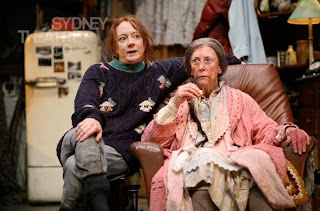 THE BEAUTY QUEEN OF LEENANE by Martin McDonagh is on the school syllabus and so the Education wing of the Sydney Theatre Company have mounted a production to take the play from the page to the stage, to give some students the brilliant opportunity to see the text as intended: Full of the life of actors telling the story to them in a space where they are part of the creative exchange that is the magic of the theatre. Actor and audience together, breathing the imaginative life into Mr McDonagh’s story. Creating new audiences with an experience that is revelatory and life enhancing and changing (we hope), besides just helping them pass their exams.

This is, mostly, a creditable production. Part of a trilogy by Mr McDonagh, (recently in Sydney we saw THE LONESOME WEST at B Sharp at Belvoir), and it is interesting to have the events and characters of that play referred to in this play. It makes for a widening of identification and ownership of the world of the play at hand.

Set in a remote part of West Ireland, where the landscape though beautiful is bleak, and a community that is losing its population to the wider world, because of unemployment and crushing poverty, (see the references in the recent Fabulous Beast production, GISELLE, part of the Sydney Festival) in a house on top of a “big oul hill” of mud, live Mag (Judi Farr), an aging, declining matriarchal figure with a despotic sense of entitlement, living with the youngest of her three daughters, Maureen (Mandy McElhinney), the others fled and married, she reaching 40 and facing the last opportunities and struggle for a life of her own. The wetness, the continuous rain of the soundscape, creates a claustrophobic environment in a house that in this set design (William Bobbie Stewart) is stuffed (I might declare overstuffed) with the detritus of a family history, piled, stacked around these survivors, almost suffocatingly. The frustrations of both the women, of living continuously, contiguously on top of each other, with little but routine to sustain their relationship, the soap opera of Australian Television occupying them in the glimpse of another world and the sunshine of other times like THE SULLIVANS, sometimes a relief. Minutely, but accumulatively, irritating and aggravating, the two women rub each other up into escalating cruelty, that only family and blood ties can get away with. It is both funny and horrible because we can all recognise it. (I could have killed my brother many times over in our young relationship!!!) The tragedy here is that the games like a Chinese water torture, break the participants away from civilisation’s boundaries and leads to torture of each other, then murder and ultimately madness. This “Loman” family (check the cast list of DEATH OF A SALESMAN), this family of a sociologically low status reaches into the status of Greek Tragedy in the climatic scenes of the text. This Mag is not a Queen Clytemnestra and this Maureen is not a princess Electra but this tragedy of Mother and Daughter, of our times is just as shattering. More so perhaps, because we know of this world about our daily lives.

This is classic melodrama with twists of recognisably funny games written by a playwright, that has, over his career, demonstrated his great skills as story teller. (Even the cinematic genre, IN BRUGES). It has the simple but expert plotting of the great writers (Synge, O’Casey, Eugene O’Neill, Peter Kenna) with the contemporary edge of merciless observation and satire of a culture that may be in the throes of self-destruction. (The proliferation and output of the contemporary Irish playwright is amazing, is it not?) An English/Irish heritage eye that sees, maybe, clearer, because it is now outside the culture, looking in.

Unfortunately something has derailed the full potential of this tale. This production.

In the program notes the Director (Cristabel Sved) talks of fairy tale motifs: "villains/witches, victims/damsels, princes/heroes (Pato Dooley played by Darren Gilshenan), and the messenger (Ray Dooley, played by Eamon Farren) – whose innocent carelessness and impatience is the fatal cause (I would say catalyst) of everyone’s downfall". In, amidst the photographs of the rehearsal process, in the program, there are still shots from the Gothic Horror movie WHATEVER HAPPENNED TO BABY JANE? and THE WIZARD OF OZ. This is astute and extrapolated dramaturgical support for a reading of the play but it should have remained just a tool for pursuit of clarity in the process. The over drawn make up of Ms Farr took me to a world of pantomime and the extravagance of the genre that Bette Davis elicited in the first mentioned film (Baby Jane). The subsequent reading, by Ms Farr, usually excellent performer, stayed on the superficial of cartoon. The worlds of Mag and Maureen, Ms McElhinney, who was and had created a real world of circumstances and cause and effect, were never in the same stratosphere. Little real connection occurred and the mounting drama, cruelty of the text, failed to ignite into the tensions of the potential of the piece. Indeed the deliberate pouring of the heated oil over the already vulnerable hand of the old woman, a penultimate climax, was barely believable and so took the shock away. It made the subsequent murder of no real impactful drama. The resultant madness of Mag, although convincingly conceived and expressed by Ms McElhinney had no supporting drama to take us believably there. It was a leap of faith in our imagination to justify and appreciate the tragedy. The fact that most of us did, lies to the credit of the writing and the courage of the actress.

The exaggeration of metaphor is apparent in the collaboration of the Set Design of Mr Stewart and Ms Sved. It is overdone not only in the dressing but in the pantomimic mounds of mud and stick out clumps of grass of the hill (“We’re not in Kansas anymore?” intimations) and the surrounds. The lighting (Verity Hampson) is of its usual assured quality but a little overstated in the colour of the melodramatic gestures. The pre-show music (Composer/Sound Designer, Max Lyandvert) is repetitive and limited in its affect; energy, but hardly conducive to a consistent atmospheric entry to the play, and the use of the soundtrack scoring from Hitchcock’s VERTIGO, was a muddle of a choice, for me, and wholly distracting (I just kept seeing Kim Novak in San Francisco in beautiful clothing at an Art Gallery) (I would have thought, considering the set design, the Hitchcock score for PSYCHO more appropriate, if it was ever appropriate at all.)

Over thought. The production seemed to be over thought. A need for the simplification to trusted story telling, based on the real world that the writer is evoking, would have served the play better, has I have witnessed in other versions of this much produced play. Mr Gilshenan was supportive. Mr Farren, observing in his costume detail even the wet of the storm, (details count!) was alert and engaged matching the aliveness of Ms McElhinney, and the give and take between them in the last scene was a relief to engage with. Lastly, I am no expert, but I was chatting to a real Irishman, in the interval, who though enjoying the play, one of his first experiences in the theatre, was a little perturbed about the varying sounds of the dialects – they were, in his observation from all over Ireland not just the West Country (Charmian Gradwell). (It is a skill and when accurate enhances the world of the play. It requires practice, and surely in a profession that is enormously International in the potential of employment, one that all actors should have under their belts, if for no other reason than for future possible employment in a big Hollywood film? – check out the detail of the Artistic Director’s dialect skills, Ms Blanchett – boy has she done a lot of film!!!)

Ms Sved last year directed a very exciting production of Martin Crimp’s DEALING WITH CLAIR at the Griffin Stables and displays, mostly, here, a real gift, but fails ultimately to give this play the relaxed detail of the skill of the writer. This, without condescension to the young audience it is aimed at , should be a very fulfilling experience in the theatre and certainly lead to lively debate in the classroom. And that is surely the point of education.

I found this production excrutiating in it's heavy handedness actually. By contrast "The Walworth Farce" which follows a similar (familiar) Irish trope is quite brilliant. Don't miss it when it hits Sydney Town!