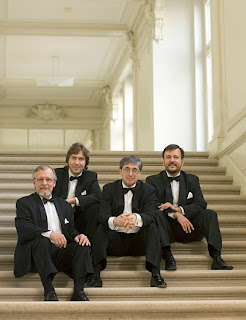 Spending the day to-ing and fro-ing in a mental debate with myself about whether I should try to get to a concert given by the Borodin Quartet, after electing to pass on the Saturday program of Prokofiev, Tchaikovsky and Brahms (Brahms being the naysayer, of persuasion, in my dilettante mind – or, truthfully, just the inertness of the animal pleasure of not having to dress and leave the house or even the bed. So, after wrestling with young students with works by Martin McDonagh, Wendy Wasserman, Lanford Wilson, Sheila Stephenson, Suzanne Lori-Parkes, and Howard Brenton (A debate with Peter Abelard and his nemesis Bernard of Clairvaux , on individuality – intoxicating!) and finally painfully (but thrillingly) bringing to life on the floor of a rehearsal room the final tragedy of the death of Coralie in the arms of the pathetic anti-hero Lucien Chardon in a workshop of Alana Valentine’s new play, an adaptation of Honore De Balzac’s LOST ILLUSIONS, I won myself over and decided to take the opportunity to overcome my own pathetic parsimony and pragmatics and go to the concert hall. The skies opened up as I got out of my bus, and running down the right hand fringe of Martin place in a search for cover from the gently wind driven wet, I skidded across Pitt Street, down Angel Place into the box office. It was 6.50pm and the bells were ringing for a 7pm beginning. I was directed to the end of a cue for ticket purchase, my nerves tensed with fear of missing the start, when a gentleman stepped forward and asked would I like a ticket, as his wife was indisposed and so had a spare. We exchanged some coin of the realm. I think, I was given a reward - bargain for my decision to go, as it was a relatively small amount and the seat was on the main floor and excellent. No time to eat, but swallowed an orange juice and ate some paper thin salted chips from a cardboard tube.

The Borodin Quartet I had read about in the press, from Moscow and of world renown for their work, here at the behest of Musica Viva, both organisations celebrating its 65th birthday. The Quartet have visited before, this is their sixth national tour, going as far back as 1965. The personnel, as perforce of time, have changed: Ruben Aharonian (violin), Andrei Abramenkov (violin), Igor Naidin (violin), Vladimir Balshin (cello). The quality of musicianship, however, still immaculate. “Different people are playing, different instruments, different generations, different hands… but still… after 65 years, the sound is still recognisable. Each member arrives in the group and studies the traditions of the previous members…… You bring what you have of your own, and at the same time you are learning from your colleagues, absorbing and matching what you have.” The strength of tradition and the classic apprised with the energy of the zeitgeist. This, recorded information, then, is what haunted my stupid prevarications of the day. Along with the attraction of the composers of the second program: two works by Dmitri Shostakovitch and one by Alexander Borodin, I persuaded myself to go– oh, wise and rewarding decision.

These four gentlemen entered the concert platform and with all the dignity of understated confidence and the accumulation of dedicated musicianship, inducing in me an ease of the feeling of being in expert hands, of being in the hands of lovers of what they have dedicated their lives too, of the safe haven of the promise of depth and authority and bliss. They sat and held in their hands their instruments and like the burnished warm colour of their instruments brought forth a sound as warm and deep, with a wisdom of honoured communication.

The first Shostakovich piece was String Quartet no 4 in d major, op 83 written in 1949. After the terrors of the persecution and prosecution of Stalin and his henchmen following the Communist Party’s denouncement of Shostakovitch’s work, particularly the opera LADY MACBETH of MTSENK DISTRICT in 1936, and the cruelling living through of the difficulties of World war II, “the façade of obedient cultural servant was a bitter pill that he (Shostakovitch) had, over time, learned to swallow… and publicly, declared his intent to make his music more accessible to the people, working “ever more diligently on the embodiment of images of the heroic Russian people.” This work written for the intimacy of the chamber of a quartet, however, because of the Jewish influences in the musical inspirations (along with the Violin Concerto [1948]), Shostakovitch was advised by friends, that the score be kept “for the drawer”. It was then, four years after Stalin’s death,( in 1953), that the work had its first public performance. The composer wrote of Jewish music: “It's multifaceted. It can appear to be happy while it is tragic. It’s almost always laughter through tears. This quality of Jewish folk music is close to my ideas of what music should be. There should always be two layers in music. Jews were tormented for so long that they learned to hide their despair. They express despair in dance music.” The lightness of some of the dance sounds, of this quartet, for me, echo with a depth of a kind of grief and bleakness. Sad and full of the weighted pressure of the lack of freedom to express one’s truth, soul. The survival instinct of the human spirit flickering against oppression, a grave experience, dominated with a melancholic tone.

What followed was another Shostakovitch quartet: String Quartet no 13 in b flat major, op 138, (1969- 70). At the time of composition the composer had being treated for serious on going health issues, his preoccupation with death seem to seep into the work. It is in three parts and presented in a single movement. (He died in 1975.) The beauty of the viola ‘singing’ at the start and elsewhere, counterpointed by the melancholy breath of the cello, and the bleakness of the tapping of the wood of the bows of the players against their instruments, like the finger of the grim reaper on a wooden window frame signalling that time is ending, finishing with a high pitched screech, scream of bow against strings, makes for a dark and desolate experience. It is an indelible cry of a human in pain. It wrings deeply in my ears, my memory. Yet I was filled with a kind of optimism.

Staggering into the foyer for respite from the depth of elation, inspired by sadness of the human condition, I watched my fellow audience. Some chatting of the music, others of their golf game, others of the weather, others of relatives and friends, charmingly, some meanly. Others of ice cream and drink.

Returning to the hall and my seat, the gentlemen of the Quartet returned, sat and prepared their instruments with the sober devotion of ‘lovers’ and began the String Quartet no 2in D major (1881), by Alexander Borodin. I did not know it and was immensely curious. This is a chamber piece written in the year that the composer celebrated twenty years of a happy marriage to Yekaterina Protopopova. It is bright with the waltz sounds of contentment and love. The first movement helped me to reminisce of Chekhov and the many other novel and film salons of period chamber music performance that I have delighted in imagining and seeing. Then in the second and third movement I came face to face with an old and pleasant acquaintance. It was completely unexpected and all the more delightful for its surprise. The tunes from the musical KISMET (Wright/Forrest) [ Baubles, bangles, hear how they jing, jing-a-ling-a] along with further relations, PRINCE IGOR, now expressed in the original inspiration, greeted me. The ‘tunes’ played so brilliantly and with so such ensemble devotion, each individual of the quartet submerging their individuality for the beauty of the score, so seamlessly, that it was one sublime voice, that, in contrast to the searing soul exposure of the Shostakovitch, previously, balanced the evening with the other side of the Janus face: joy. The encore which the Quartet played was also a Alexander Borodin piece: short, sharp and winning.

Alexander Borodin was not a professional musician, although he is incorporated “along with Balakirev, Rimsky – Korsakov, Cui and Mussorgsky… as a member of the composers’ collective known as the ‘Russian Five’ (or ‘Mighty Handful”). His principal occupation was that of a leading industrial chemist. His professor at the St Petersburg Medical – Surgical Academy, Nikolay Zinin warned Borodin, “Mr Borodin, busy yourself a little less with songs. I’m putting all my hopes in you as my successor, but all you think of is music: you can’t hunt two hares at the same time.” But Borodin did succeed Zinin as Chair and Professor of Chemistry at the Academy, ultimately becoming Director of the academy’s research facilities in 1874. Ever the pragmatist and determined to protect his precious hand-written manuscripts, Borodin invented a chemical compound – a special type of gelatine coating – that enabled him to preserve his musical work for posterity.” I appear to be digressing but do so because this AMATEUR gave us some great music and this concert had been dedicated by the Artistic Director of Musica Viva, Carl Vine, personally, as a tribute to Kenneth W Tribe AC, whose professional life was that as a professional at Law, and yet also dedicated himself to the propagation of music , through, particularly Musca Viva , and has had an “influence, in Australian cultural life that is far – reaching.” Another AMATEUR ‘musician’ making an incalculable impact on our lives. I thought it was a wonderful choice of composer to honour this man.

I left this concert extremely pleased and quietly told myself that I should, given the means to do so, to respond to my instincts, rather than to prevaricate and possibly lose those experiences that make life memorable and simply worth while. I bought a copy of the BORODIN QUARTET’S recording of the two Borodin Quartets, in the foyer, to take home. Ahhhh.