Someone Who'll Watch Over Me 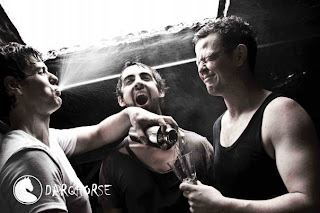 Ion Nibiru presents Someone Who'll Watch Over Me by Frank McGuinness at The Pact Theatre.

"Ion Nibiru is a new production company dedicated to breaking the mould and offering fresh perspectives in creative enterprises. Co-founded by Rod Byrnes and Ray Sullivan.... along with Zac Jardine and a working relationship with Production Company Darqhorse (headed by John Ma)". They state later in their program notes, "It is not a different direction; rather, an alternate perspective."

Frank McGuinness is an Irish playwright whose most recent work, GRETA GARBO COMES TO DONNEGAL, has just opened in London (January). Besides his own plays the most well known, perhaps in Sydney terms, being OBSERVE THE SONS OF ULSTER MARCHING TOWARDS THE SOMME, Mr McGuinness has made translations/adaptations of the classics, the Greeks (Oedipus Electra etc), Chekhov, Brecht and famously Ibsen. SOMEONE WHO'LL WATCH OVER ME was first performed in 1992. It covers the behaviour of an Irishman, an Englishman and an American incarcerated in a cell in Lebanon, and was written in response to the imprisonment and eventual release of John McCarthy, Brian Keenan and Terry Anderson. (In fact Mr McGuinness met Mr Keenan several times in the writing of this play). And although none of these characters in the play are representative of any of these men this may be the grounding for the veracity of this play.

This text appears to be an odd choice for a new company who wish to break the mould and offer fresh perspectives, as the subject matter here, although still relevant, has moved on fairly dramatically in the intervening years, both in the known facts and the horrendous experiences of prisoners of 'war' (e.g. in abu ghraib) and in the dramatising of these events.

However, what this play does appear to give this company, is the opportunity for these three actors to showcase their talents and skills, (which is not a bad reason to choose this play). Although the circumstances of the age range of the characters is circumvented here ,all three of the young actors, Ray Sullivan (Edward), James Elliot (Adam) and Rod Byrnes (Michael) demonstrate an agile facility and expert range of skills both vocal and physical. The text is fearlessly attacked at a breakneck speed of articulation and clarity - one needs to be ready to chase the material. Musically the actors demonstrate singing and physical adeptness. The dialect work is mostly secure (although the American sound seems to slip around quite a bit). The director (Nikola Amanovic), fresh out of the NIDA course (2009) has engaged the actors into a very convincing embodiment of the life force of these men, the physical inhabiting is vital and striking. However, the youthful energy and dexterity of these young men undermine some of the compassion and deep emotional life of the characters as written by Mr McGuinness. Part of the tragedy is surely the maturity of the men held in chains and the rich lives they can recall that is not available anymore. It is interesting to note the first cast: of this play, for instance, Alec McCowen created the role of the Englishman, Michael, at the time an actor well into his middle age if not slightly older. No matter the skill of Mr Byrnes, Sullivan and Elliot the gravity of a life lived cannot be substituted with youthful dexterity. The play in this production thus, comprehensively, loses intention and impact.

Add to this a not altogether convincing creation of the world of the characters. Both design choices and environmental choices of the playwright have been 'tinkered' with and do not really assist the arc of the storytelling in the play.

These "moulds" or "perspectives" have been shifted, it seems to me to fit an investigative rehearsal process (known as 'action analysis' - check the late writing of Stanislavsky and/or Sharon Carnicke's book: Stanislavsky in Focus), but has subsequently, mostly, ignored the 'critical analysis' of the given circumstances of the play and so the journey and gathering drama/tragedy about these men is under explored and so,understated, so, the material of the play becomes mostly an emphatic emphasis on the "fantasies" and "games" that these men make to survive, rather than to an artistic balance, that demonstrates the NEED for these characters to employ these 'fantasies' and 'games' in the gripping fight, in this text, with the off-stage, invisible enemy of the torturers.

The Design (Nevena Mrdjenovic) within the black walled encasement of the theatre structure is a letter box shaped sky blue oblong painted across nearly the full width of the stage. [Lighting, Sarah Kenyon, simple but supportive of the directorial demands] On this oblong are two seventies swivel armchairs and a free standing lamp stand with red shade, (found funkily in some opp shop, perhaps?) and two books - a Bible and Koran. Mr McGuinness describes his setting: "Edward and Adam are together in a cell. They are separately chained to the walls." Later Michael, too, is chained to a wall. So, firstly, the company present a seventies living room with furniture instead of a cell. To what intent is not fathomable, to me. It seems fairly arbitrary. Secondly, the actors are not chained, rather their ankles are tied with elastic 'bungy' cords, comfortable enough to allow the actors to freely roam the space, even at one stage there is a Tai Chi like exercise (non scripted) by Edward. All this free action/movement defeats one of the major circumstances of these characters lives: chains and limited spacial ownership. Textually, physically the men are chained and uncomfortable, claustrophobic. But vocally and imaginatively the men are free, unchained. By having the actors able to shift, move, dance in the space, part of the motivating force for the speeches of the play dissipates. The frustration is less heated. The speeches in this production become tiresome indulgences of one up man ship, instead of a joint means to thwart their captors.

The psychological pressure Mr McGuinness provides with the invisibility but constant presence of the guards is almost absent from the action of this production. Without the potent motivation of the limits of chains in a cell and the outside pressures of the guards, in the writing provided by Mr McGuinness, the action of this production, as provided by the Director and Designer undermines the action of the play and limits the motivating dimensions of the text that the actors have in acting their roles. One was not moved by the final moments of the play. No subjective experiencing but rather a rational relief that the night had finished.

The experience of this night in the theatre is a mixed one. While the acting skills demonstrated by these young artists is unequivocably admirable and attractive, and worth witnessing, the intentions of Mr McGuinness and his methods are diluted and less than successfully substituted.

In the program notes from the company there is an admittance: "While the characters have been changed somewhat for the play (probably means production) the sentiment of Brian's story (presumably the real Brian Keenan, not any character in this play) remains the same: Who are we as human beings? Why do we do the things we do? Will I understand my neighbour- my captor - the aggressor - the homeless? This story reminds us of how in the most inhuman of circumstances we grow and deepen in humanity." (Extremely admirable.)

The play survives the liberties that the company have made with Frank McGuinness's text and demonstrates its strength and although the intentions of Ion Nibiru, a welcome new comer to the burgeoning Sydney theatrical scene, in performing this text is admirable, the artistic integrity, in choices could be suspect.