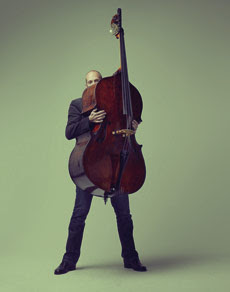 Seven pieces of music. How generous the ACO is to its patrons. Two of the pieces are by Franz Schreker, Scherzo (Composed 1900) and Intermezzo for strings,Op.8 (Composed 1900). Described in the program as "The missing link between Strauss and Schoenberg", Schreker was greatly esteemed in his time but is nearly forgotten now. New rehabilitation of this composer, lost in the madness of the German Nazi period, has been in action, spearheaded by the Franz Schreker Foundation. These small works "display a sort of post-romantic, sultry, passionate lyricism." The music we heard was sufficient to awake one's curiosity to further output of this musician.

The principal theme of this concert is to present members of this orchestra in featured solo roles. The first exciting exhibition is given by the Principal Cellist, the Finnish born Timo -Veikko Valve. The work by CPE BACH: Cello Concerto in A minor, Wq 170. In three movements, the first and the third, Allegro assai, surround the second, Andante. The slow, "walking pace" movement luxuriates "in a passionate and long-lined love song." Rich in its extended sounds and full of romantic wallows of sound. While the two outer movements bustle in roiling agitations of speed and rhythmic energy. Mr Valve seated on his music platform and facing us, the audience, begins with a demeanor of white faced serenity, which at the 18 minute or so concerto end, is charmingly red cheeked and blushed, burnished with a glowing patina of perspiration of the brilliant concentration, demanded by this artist, in executing the rhythmic energy of the Bach work. Altogether, exhilarating.

The triumph of the concert, for me, was the performance of the 2010 Barbara Blackman commission, CRIME AND PUNISHMENT by Matthew Hindson. Written for the orchestra, the soloist part is for the Double Bass, played by Canadian, Maxime Bibeau. Long-limbed and hugging his instrument into his body, affectionately, at once appearing as a classicist and jazz player, with the bow sometimes sheathed in its case thrillingly, the long fingered artist plucks and strokes the strings in powerful evocations of perpetrators of violent crimes and evocations of strong payback of punishment in the extremely strenuous fingering and bowing of the instruments strings. Mr Bibeau gave an impressive and unforgettable physical (and emotional) performance. Mr Hindson, present in the audience, could not have envisaged a more powerful evocation of his music. Certainly the work and performance were passionately responded too, by the audience.

Christopher Moore playing on his viola presented, for me, a facet of the musical personality of Benjamin Britten, that was new to my knowledge. LACHRYMAE: Reflections on a song of Dowland, for viola and string orchestra, Op.48a. This was an unexpected choice from Mr Moore (who nearly always carries a much more radical demeanor) and the pleasure in the surprise was enhanced by the concentrated passion of the playing.

The other soloists were firstly, Diana Doherty, a frequent guest performer with the orchestra in Vaughan Williams' Oboe Concerto (Composed 1944). The oboist Leon Goossens, the brother of Eugene Goossens, "commissioned this concerto from Vaughan Williams during World War Two.... It is a work very much of its time and place, offering an optimistic antidote to the frightening soundtrack of wartime Britain." The virtuosic pyrotechnics demanded of the soloist in this work were thrillingly and joyfully given by Ms Doherty.

The final presentation was of the familiar Johannn Sebastian Bach Concerto in C minor for oboe and violin. BWV1060. The oboist, was,once again, the agile and amiable Diana Doherty, accompanied by Helena Rathbone, the Guest Director of this concert and Lead Violinist. Sympathetically supported by the orchestra, Ms Rathbone dueled blissfully with the oboe to create anew, a familiar work.

To see with one's ears the individual orchestra members step forward in this concert with the greatness of individual virtuosity, demonstrates why the Australian Chamber Orchestra is so consistent in the quality of its music making. This is an observation of a mere fan, not a musician. A great, civilising, night out.

Playing until the 24 March.
For more information or to book click here.
Posted by Pearly Productions at 6:26 PM