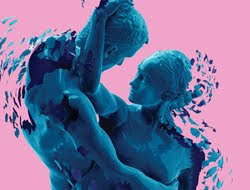 The Sydney Dance Company begin there new season in Sydney with two world premieres: Adam Linder's ARE WE THAT WE ARE and Rafael Bonachela's 6 BREATHS.

Adam Linder is a young Australian born dancer/choreographer invited from Berlin, where he is now in residence, as a guest artist for this opening 2010 season. "According to Mr Linder, ARE WE THAT WE ARE is a physical exploration of altered states of consciousness within human experience. Embodying arcane states of otherness, the work investigates mysticism and spirituality, rapture and trance, psychedelia and sexuality, to expose realms of awareness beneath the everyday reality. By illuminating the potential of the body to transcend the conscious self, we are asked to question what lies beyond ordinary rational awareness."

We would/could possibly question "stuff", as above, if the dance work had any real clarity of vision to communicate. Otherwise all the above hyperbole is just twaddle and gobbledygook. The dramaturgy/text (Sally Schonfield) is so superficial as to render the work intellectually, to which it has pretensions, silly. Silly. Silly.

The choreography which, initially, is ground hugging, is mostly physical contortions and sculptural arrangements of entwined grostequeries, buzzed by a flying lighting bar of intense colours (Nick Schlieper). My recent visit to Paris awoke me to the terrors of the gargoyle decorating its many buildings and the sculpture rooms in the Louvre and British Museum to the splendid three dimensional bodies in space - which one can walk around and view in a passionate interaction, that the flatness of the paintings (thrilling, though some of them, many, of them are) can't. Some of Mr Linder's work has the effect of 'sculpture vivant'- tortured and alive. Later, we move into standing and kicking etc but the costume design of Jordan Askill has added to the jean and t-shirt or singlet, for a sequence, a set of ridiculously amusing head dresses that fail to convince one of anything, except a vision of a high school version of perhaps A MIDSUMMER NIGHT'S DREAM (the fairies, perhaps).

"The piece is constructed as a journey through this series of altered states, Linder tells... "One is a primal, trans-induced ritual. Another is the altered state within sexual union - the dissolution of self within the union of two beings - which is related to the chemical potency in the body for sexual otherness. I also take a look at the hallucinatory visual element of an altered state and explore the myriad of images and references and transfigurations that can happen within a hallucination; as well as the collective unconscious and collective experience." Maybe a handful of drugs could be handed out to the audience to help us grasp this in the work. That the final images have the seven dancers appear with six balloons tied around their wrists moving in amongst themselves to a gradually entangled set of strings is almost risible. It is, on our night, with my bewildered audience. Bits of the dance work were interesting, but, as a whole, considerably underwhelming and tiresome.

Comparatively, the work of the Artistic Director of the company, Rafael Bonachela, 6 BREATHS, is riveting. Beginning, with what is becoming a hallmark of this choreographer's aesthetic, a Video Art spectacle (Tim Richardson) of the breath of nature shaping a huge head sculpture that coalesces and disintegrates - in the final sequence adding the figure of a female in a dance pose much like, or is, the "branding" advertising image seen around Sydney public spaces for this work. That this is the most satisfying element of 6 BREATHS is not very encouraging.

A commissioned score from Ezio Bosso, in six sections, of piano and six cellos, is the result of a collaboration with Mr Bonachela. Sometimes beautiful but mostly unremarkable. The choreography has a feel of old ideas re-configured. The other works of Mr Bonachela reverberate in my memory as I watch this piece. The fact that there is no set (for either work), throws enormous focus and responsibility onto the choreographic images. There is no distraction from the choreography. The work must stand and fall on the movement.

The costumes by a fashion designer, Josh Goot, a simple 'designer' singlet top, and all dancers,wearing a short uni-sex skirt with a repeated imaging of elements of the video breath winds of "leaves" covering black underwear,is functional but not arresting.

This company of 12 dancers dance, mostly, dedicatedly and well, although the big groups are sometimes messy to look at. But all in all a big disappointment. The work is unmistakeably contemporary territory but lacks real variety to maintain one's excitement or interest. The dancers have such potential but choreographically seem to be asked to work in very limited expressive modes.

See for yourself. I personally would rather have seen HAPPY AS LARRY, again.

Quotes are from the program and an interview with Adam Linder in SX by Garrett Bithell.

Playing now until April 10.
For more information or to book click here.
Posted by Pearly Productions at 3:03 PM