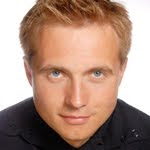 So, I have snatched a two week break in the USA. My first stop is San Francisco, where I have many work connections to re-acquaint with, it has been three years, and, both, they and I are passing too quickly through TIME, not to catch and celebrate life with them. On April 3rd, my birthday, some friends take me for dinner at the Foreign Cinema Restaurant in the Mission district. The dinner booking is at 6.30pm!!! We finish a terrific meal, early. They ask what I would like to do. I confess that I had read that the Shostakovich Eighth Symphony was playing tonight and I wondered if they could drop me off at the Davies Hall over on Van Ness to see if I could catch it. They, graciously, agree to let me go. In a very sporty car I was whisked off. Get into the Hall Box Office just as the interval is concluding and buy a Rush Ticket :$20. Great seat. I have missed the Grieg Piano Concerto in A minor, Opus 16 played by Simon Trpceski, but am in time for the Shostakovich Symphony.

Tall, slim and elfin-handsome, Vasily Petrenko, this 34 year old Russian musician commanded, and sensitively, with a fearless and deeply felt artistry, constructed an experience of piercing humanity with the San Francisco Orchestra in this performance of the 8th Symphony. The Seventh (The Leningrad) and the Eighth Symphonies are known as the War Symphonies. The Eighth was written in the summer of 1943 at the Ivanovo Home for Composer’s, presented in September to the Committee on Arts of the USSR Council, and officially sanctioned, was performed in November of that year ,conducted by Yevgeny Mravinsky with the State Symphony Orchestra, part of a Festival of Music to celebrate the twenty-fifth anniversary of the Soviet Union. Writing of the Eighth Symphony shortly before its first performance, Shostakovich was disarmingly cool about its intent. “It has no clearly defined subject-matter, it reflects my thoughts and emotions. There are many inner conflicts, dramatic and tragic...but its general tone is optimistic and life-asserting.” Later he added : “This work was an attempt at expressing the people’s experiences, at reflecting the grim tragedy of war. My Symphony is an epitome of those hard times..” In freer times,1979, in his MEMOIRS (TESTIMONY – as told to Solomon Volkov), Shostakovich claims that the Eighth Symphony is his Requiem: "It cannot simply be seen as a reaction to Hitler’s invasion… I was thinking of other enemies of humanity… Nowadays people like to recall the Post-war period as an idyllic time, saying that everything was fine till Hitler bothered us. Hitler is a criminal, that’s clear, but so is Stalin…I haven’t forgotten the pre-war years. That is what all my symphonies, beginning with the fourth, are about."

Indeed, written in five movements, the overwhelming experience for me was one of a deep and dense dream of agitated perturbation, brooding, and full of whirlpools of despair shafted and propelled with brutal, invasive outbursts of disturbing violent nightmare. The first long movement: Adagio-Allegro-Adagio, “the heart of the symphony”, was coaxed by Maestro Petrenko to striking effect, creating an “anguished assertion of the soul”. Tears flowed from me at the sheer audacious expression of the soul, manipulated by the composition of the music and the conducting and playing of the platform artists. There is emotional restraint, poignant for its tensions, transformed by vicious climactic outbursts of savage intensity. The marches of the second and third movements are relentless and ugly, swaggering with a kind of mock grandeur. The third movement, especially, was driven forward with the irresistible propulsion of perpetual movement, and one is caught in an accumulative slipstream of music, hurled, finally, and exploded into and by, a fury of drumming and shattering dissonance. I was left breathless and creatively apprehensive. The fourth movement : Largo, a passacaglia, with the motive repeating twelve times : The fluttering flutes and muted, plucked strings in the middle of the movement, eerie moments of strange and unsettling communication. The final movement of this Symphony, written in the middle of the war, 1943, Shostakovich, later, referred to it as “an attempt to look into the future, into the post-war epoch. Life is beautiful. Everything evil and ugly will disappear; the beautiful will triumph.” But this is not altogether convincing in the music and at best the hope is timorous, the coda trailing off into an extensive stretch of pianissimo strings. Stretched to an almost inaudible but palpable vibration, of what? Peaceful Dream? Hope? Cataclysm? Or Nothingness? The strident nightmare of confronting despair and helplessness of the Eighth Symphony is finally dispersed rather than resolved. The future (in 1943) hangs in the ether of possibilities… in war torn Russia with either Hitler or Stalin as your master survivor, a future with not much joy to anticipate, I imagine.

This was a splendid performance. The acoustics of the Davies Hall, now fabulous in their clarity and resonance. I also was a guest at a concert given by the CARNEGIE MELLON PHILARMONIC. (A student orchestra ) at Carnegie Hall in New York, later in the month. Here the acoustic qualities of the auditorium were magnificent (or seemed to be) and it made me wonder at the dullness and the lethargic quality that generally the Sydney Symphony,and others, labour under in the Sydney Opera House, Concert Hall. Are they difficult acoustics? If so, when will the bullet be bitten to close the Hall and do something. I remember, anecdotally, that the Davies Hall in San Francisco when completed was found to have short comings in sound quality and the “powers that be” closed the auditorium and found and enacted solutions. It was probably hard to do on many different fronts, not least expense and pride, but whatever, the experience of this Eighth Symphony in this Hall was vital with forces of music as part of a nature driven force, that had all the possibilities of contrast that nature has at its beckoning. A birthday present to be cherished.
Posted by George Khut at 3:43 PM