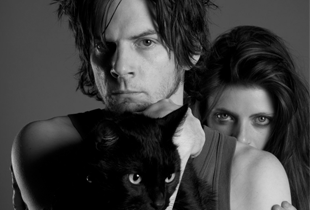 Sydney Theatre Company and The Border Project in Association with the Adelaide Festival of Arts present VS MACBETH (Most of it) by William Shakespeare at the STC Wharf2.

On entering the theatre, a warning sign on computer screens hanging from the front lighting bar, on the sides, tell us to prepare to play Chinese Whispers. The first that was passed along my row of seats was “THIS PLAY IS CURSED.” This was indeed a prescient warning for what followed.

This is a collaboration with an Adelaide based company The Border Project and the Sydney Theatre Company via The Residents. (It played in Adelaide during the recent Adelaide Festival Season.) Both are driven by young artists and both have similar mission statements of exploring new ways of communicating to a wide audience through the means of the theatre. "The Border project has had an on going investigation into using popular forms as a device to take audiences into unfamiliar, unique and experimental territory." This company were guests as part of the STC New Stages last year where they presented, HIGHWAY ROCK ‘N ROLL DISASTER. “The Residents are nine actors employed full-time by Sydney Theatre Company with a focus on the development of theatre... with the exploration, shaping and fine-tuning of new works as a guiding objective...” If this is an example of the quality of the object of both these mission statements then they need to be more rigorous with their next project. They failed not only my generation (old theatre goers - “old farts”, perhaps) but those about me of the target generation, “our generation”, were less than enthralled. Disconnection from this work may drive them back to the “traditional theatre” that The Border Project seem to wish to subsume.

VS MACBETH in its hype during rehearsal was about the melding of the superstitious history of the productions of MACBETH over recollected, anecdotal history with a telling of the play. What we get is mostly a two hour performance of the Shakespeare play with incidental reminders and jokes of the accidents of time past and recent. Incidental is the optional word. Any of the "incidents" are cursory and under dramatised. After a while they are submerged into the action of playing a very straight forward reading of the text. It is as if just doing the play was time consuming enough, let alone really investigating the other idea and interpolating it into the work. It was incredibly dull. So what to talk about? The fall of the lighting bar is spectacular, in a very controlled fashion. Little else of real instance occurs further in that stream of the production.

So, the playing by the company of Shakespeare’s play (Most of It) is what is left. It is a very competent reading, generally, but not much else. Cameron Goodall (a founding member of The Border Project and also The Residents – is that the connection for the raison d’etre of this production?) plays Macbeth with the panache of an intelligent enthusiast. (The explosions of his vocal plosives, B’s T’s D’s [and sometimes his she’s and f’s] especially his P’s, however, are so pronounced as to be remarkably mannered and irritating, that I wondered if this was part of a running gag of the production. Amber McMahon, from The Border Project company, gave a clear but uninteresting rendition of Lady Macbeth. (lots of South Australian ‘A’s” and “I’s”.) Takhi Saul gave a ridiculous reading of Duncan, flippant and mildly ‘camp’, whilst doubling a very passionate Macduff. Brett Stiller does some impressive work in a cut down version of Banquo. Richard Pyros as Malcolm/Murderer, confirms a favourable impression made in THE MYSTERIES. But the sleeper of performances in this production is Zindzi Okenyo as Lady MacDuff. Her reading is transcendently clear, and moving. Tremulous with all the compassion of a witness and victim of tyranny. Subtly, her understated integrity, shone in her work in THE MYSTERIES, as well. I believe someone worth watching in the future. The other members of the company gave perfunctory performances with such under energised use of the language of the text and lazy sounds of Australian broad vernacular, that one could not help but recall the first Chinese Whisper and statement from this production: THIS PLAY IS CURSED.

All the resources of these two companies, time ,talent and money, appeared to me, to be squandered on ineptness. Whatever it cost the companies to produce I and others have spent our money, to our cost, to be rewarded so terribly, flippantly.

The Darlinghurst Theatre, stepping way out of character, in terms of its usual programming has a MACBETH opening soon. Please lift the curse.

It sounds like the sadly increasingly usual problem in Australian, particularly Sydney, theatre - directors with no depth, be that of talent or experience. The modern theatre is driven by the director and failure must lie largely at her or his feet surely. We get production after production by tyros with nothing but chutzpah to carry them whilst experienced directors of talent and depth languish in unemployment, growing increasingly depressed and disillusioned as opportunities are squandered on these people with big ideas but no substance. And don't get me started on sadly unused mid and late -career actors...!!!