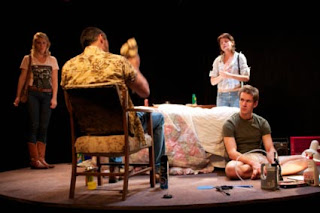 One of the strongest casts I have seen on a Sydney stage in a long time, and well worth the visit. As Harry Kippax would have said, 'Recommended'. Ms Cronin is, as you say, in wonderful form; and Mr Walker in this moves onto another plane: far and away the best work I have seen from him. Despite the fact that the play provides excellent opportunities for the actors, which they seize surely and often excitingly, I have strong reservations about it, and also about the production; rather, the direction of the production. I have not read the script, but it seems to me to be a commercial piece that might have served as an episode of 'X Files', and in its craft - structure, characterization, ear for language and the poetry of the demotic - not the worse for that. But, in descending into TV melodrama towards the end (murder, madness) the author seems not know how to end his play. In tricking up a naturalistic play with an essentially non-naturalistic production, Mr Skuse tries to make more of less, and in doing so drew attention - for me - to the play's claim to be more than it is: not much more than superior entertainment. Mr Letts, as evidenced by the superb MTC production production of 'Osage' and its stunning cast (led by Robyn Nevin and Jane Menelaus, both superb), was finding his feet in 'Bug'. I'm glad he persevered.