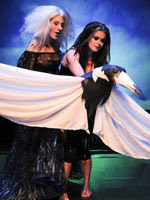 MONKEY BAA in association with Siren Theatre Co present FOX, a new Australian opera for young people. Based on the classic picture book by Margaret Wild and Ron Brooks at the Seymour Centre, Sydney.

This is a 50 minute opera by Daryl Wallis based on the children's picture book called FOX by Margaret Wild and Ron Brooks. The opera is a solo score sung by a soprano, the Spirit (Sarah Jones). Accompanying the 'song' are three actors who through dance and puppetry enact the physical story telling. After a bushfire, an injured Magpie (Jane Phegan) befriends Dog (David Buckley), and then is tempted and seduced into deserting her 'saviour' for a faster companion, the Fox (Jay Gallagher). Guilty with conscience, Magpie struggles through difficult circumstances to return to her original friend. "FOX is a story of friendship, betrayal, transformation and great courage." All worthy values for any form of theatre to engage in, let alone the formative one of children's theatre.

The most delightful moments at this performance occurred after the performance when the director (Kate Gaul) and actors appeared on stage to talk to and answer questions from the children/audience (early primary school). Astonishingly (or not) all of the audience had read the book. The questions were full of curiosity of the making of theatre, of how things came together. Delightful to witness.

Opera is a difficult cultural form and experience for any audience, and the fact that these two companies, MONKEY BAA and Siren Theatre Co, embarked on this means to tell a story and aim and trust to entertain and hold the concentration of these youngsters is a testament to their courage. "The musical palette" employed by Mr Wallis is "a hybrid of forms ...flashes of musical theatre and pop music references, operatic colours and intensity, jazz harmonies and the use of electronic sound-scape." The score is pre-recorded and sung well by Ms Jones. However, I found the soprano tones sometimes made it difficult to hear the text and as I had not read the story, found the narrative hard to follow, accurately. The solo vocal line also removed any sense of dramatic interaction, which underlined further the importance of the need of textual clarity.

The three actors through "the movement consultancy"(Raymond Mather) and puppetry (Ingrid Magonov) take on the responsibility of the physical enacting of the narrative. It mostly succeeds. The movement quality of the performers is variable and not as convincing as to support an entranced belief in the action. Sometimes the effort to sustain the demands showed and the fluidity of commitment faltered. The hybrid form of puppetry with use of cloths to create many, many elements, is not as consistently dexterous as could be, should be, perhaps.

The production values of set and costume, wigs (Gabriela Tylesova) along with video projections (Mic Grouchy) and the lighting design (Luiz Pampolha) are an asset to the vision and direction of Kate Gaul.

This project is now embarked on a lengthy tour around the country and the young audiences will meet a performance production that is both ambitious and challenging. The youngsters I saw it with were generally attentive, if not always gripped, but their sense of wonder and interest was revealed in the post show discussion. The education, of seeing a story that they had read, transformed into this strange musical form, opera, along with the visual entertainment had given most of this audience an engagement that had sparked curiosity.

MONKEY BAA has developed an envious record in engaging young audiences, long may they work in this endeavour. FOX is a unique, adventuresome work.
Posted by George Khut at 8:58 PM