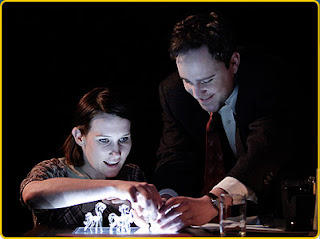 THE GLASS MENAGERIE opened in Chicago on December 26,1944. The following year it opened on Broadway and played there for nearly two years. "It would be performed all over America and abroad, and Hollywood would film it. Next to OUR TOWN it would become the best-known American play. When the New York Drama Critics gathered in the Algonquin Hotel on April 10,1945, they took just fifteen minutes to award nine of their fourteen votes to THE GLASS MENAGERIE and acclaim it the best play of the 1944-45 season."1 It is regarded, today, as the first of Tennessee Williams' great contributions to the theatre. Starring Laurette Taylor, "On that cold night, 26th December,1944 the convergence of two enormous theatre talents made theatre history. The performance became legendary, and the play became a classic in the literature of the American theatre".[2]

Williams called his play a memory play. "To his own remembrance of family life in St. Louis he fused the slow remorseless destruction of the Wingfields, a mother and two children, trapped by circumstances beyond their control in a world from which there was no exit. In plot and storyline, THE GLASS MENAGERIE is simple and straight forward… Williams had been preoccupied with what he called 'the new plastic theatre', (Detected influences: D.H. Lawrence; Chekhov; Strindberg; Lorca; O'Neil; Ibsen; Pirandello and the poet Hart Crane.) staging of THE GLASS MENAGERIE reflected his expressionistic concept and embraced atmospheric touches, lighting, music, and a subtlty of direction in a free modern technique. …With his compelling use of symbols to emphasize with and contrast with the meaning of the action and dialogue, THE GLASS MENAGERIE contained everything that would become the trademark of a Williams play"[1]

"In his autobiography, Arthur Miller wrote, "The revolutionary newness of THE GLASS MENAGERIE...was in its poetic lift, but an underlying hard dramatic structure was what earned the play its right to sing poetically. Poetry in the theatre is not, or at least ought not to be , a cause but a consequence, and that structure of storytelling and character made this very private play available to anyone capable of feeling at all". [3]

This production directed by Gordon Edelstein at the Laura Pels Theatre takes some liberties with the intentions of Mr Williams scenario. Some of the New York critics have been admiring of this take with the play and whilst it is a very arresting interpretation ,I, personally felt that, overall, the emotional and poetic impact of the play had been reduced to pragmatic needs. No less urgent but pragmatic and dulling.

The conceit of this vision of the play is too frame the play in a run of the mill hotel room (Designed by Michael Yeargan) where Tennessee Williams is typing a final draft of the play and has he types, acts out the text, and with the power of his imagination, the scrim wall of the 'room' disappears and the portrait of Tom Wingfield's father and the figures of his mother, Amanda Wingfield (Judith Ivey) and sister, Laura Wingfield (Keira Keeley) are revealed, who on cue, enter the hotel room and play the scenes out for him and with him. Tom sometimes mouthing the text along with his characters. The play is played as an imagined staging in the mind of the author as he finalises, at his typewriter, his playscript.

The bleak pragmatism of the hotel room design reduces the scale of the play to a "rehearsal" feel- the boundaries of the emotional world still to be found. The scale of the poetic emotional expression of the play is reduced to a cooler, practical tentativeness. In all, the affect for me, was one that was ultimately underwhelming. The usual power of this well-known play diminished. One was not moved. One cogitated the pros and cons of the direction. One admired, or not, the artistic licence and choices of the production. It became an objective experience. One hardly became lost in the subjective power of the tragedy of the play.

There is no denying that Ms Ivey gives a spectacular performance within the limitations of the production. Amanda Wingfield here is not some romantic, nostalgic, whimsical self deluder wallowing in a long gone past but one violently caring and scheming for the future. The future for Laura, Tom and then, herself. All of her energies in the present tense of the action of this production are focused on the future and how to achieve security for her family. The physical details of this Amanda are consistently drawn, body, voice and especially facial characteristics. Amanda is the centre of this production.

Patch Darragh is very good, first as Tennessee Williams and then Tom Wingfield. But it is this double filtering that prevents the full emotional revelations of the character in the play from erupting. The final speech for instance is tempered as a recited reading of the speech, the raw emotional impact hampered by the writer listening to the aptness of the text and measuring its potential instead of kinetically experiencing it as the agonised sorrow of the young man, Tom, sacrificing his sister and mother for his own needs -"Oh, Laura, Laura, I tried to leave you behind me, but I am more faithful than I intended to be!" Muted in this performance.

Michael Mosley as Jim O'Connor, the gentleman caller, plays the youthful callowness of the young man straight down the line as a brash and thick-headed narcissist. Ms Keeley plays Laura as a whining victim of few attractions. The performance has a one note quality about it and does not permit any real sympathy or empathy for the character's predicament. In the constraints of this production Laura appears to be hardly worth grieving about: "I reach for a cigarette, I cross the street, I run into the movies or a bar, I buy a drink, I speak to the nearest stranger - anything that can blow your candles out!" Ms Keeley's Laura had never lit her candle, let alone candles.

Late in his life Tennessee Williams said about his play, "It is the saddest play I have ever written, It is full of pain. It is painful for me to see it."[2]. This is not the case in this production. It is as if the New York 'carpetbaggers' have come in, sacked the 'southern' values of the dramatic heritage and claimed this play as a vision of a practical woman of the 'North' trying to assure the economic security of her family in these GFC days. Gone is the emotional poetry, gone is the romantic human dimension of a lost golden time, present is the calculating desperate manipulations of a woman in despair about the family's financial future, (Like every good capitalist should).