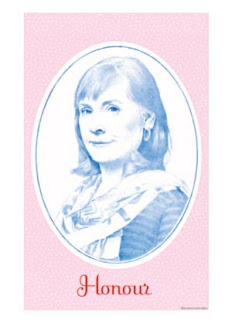 Honour is the name of the principal character in this play by Joanna Murray-Smith. From the program notes: “Honour or Honor is the evaluation of a person’s trustworthiness and social status based on that individual’s espousals and actions…”

Honour (Wendy Hughes) has been married to George (William Zappa) for 32 years. “Gus (George) has been the authoritative voice for a generation of TRIBUNE readers for almost twenty years…” in an award winning column – and when the play begins – is being himself interviewed by a journalist, Claudia (Paula Arundell). Honour has put aside her own promising career (writer, poet) to support George, selflessly and devotedly, in his developing career, and has being the quintessential wife and mother. Honour and Gus have a daughter, Sophie (Yael Stone). Claudia becomes a siren of attraction for George and in a dilemma of 'mid-life' crisis (perhaps), George capitulates to his stirred vanity and desire and decides to leave his family and move in with Claudia.

Each of the characters in a tightly written 18 scene, 95 minute (with no interval) play, debate their evolving understandings of who they are in the descending and then, reconstructed maelstrom of emotions. We, the audience come to estimate their honour according to the “individual’s espousals and actions” as each scene, delightfully, unravels.

In a robustly directed production (Lee Lewis) each of the characters reveal the multitudinous facets of their humanity. Sometimes the audience reviles a character, only, to later empathise with them. In my experience, as an audience, I was not always sure-footed about my feelings towards a character, and when I was, in the next scene, the ground shifted once more, and I had to find an equilibrium, all over again. I changed sides a lot. The arguments that Ms Murray-Smith gives us, are all, often, clever or provocative or witty or just outright funny. It was quite exciting. Immensely exhilarating. As I sat there, I thought this is what I missed with last year’s production of GOD OF CARNAGE. Real pertinence. Both had wit, intelligence and pertinence. But this audience were 'stung' with real pertinence to their emotional lives/histories. This play/production lacked what appeared contrivances in either the play or production of the Yasmina Reza, last year. The audience about me, especially the women, were hugely charged with unusually vociferous responses. Hisses, groans and even booing. Sometimes their male companions seemed to diminish or even squirm. The play, now 15 years old, and the production had found some targets, that amongst this audience, were raw and demanded reaction, that was not just intellectual but often physically visceral. A woman’s voice speaking to her community associates.

The staging history of this play is quite impressive. High profile international companies and actors. The Raw Pertinence is obviously one that crosses cultures. A very good night’s theatre.

Lee Lewis (the Director) and Michael Scott-Mitchell, the Designer, taking their cue from the writer have not set HONOUR in “ literal locations on the stage.” Ms Murray-Smith goes on, “The fluidity of speech, relationships and ideas in the play suggests an abstract, neutral design through which characters float, rather than become attached to or ‘clothed’ in their own context.” The resultant collaboration in this case is a white picture-frame, white brick, side-walled open space, that has horizontal lines across the lower downstage floor leading to a four stepped rise to the back area; a ‘pergola’ of raw wooden posts and ‘roof’’ dominating the inner, downstage area. It has an architectural aesthetic, that suggests comfort even wealth. There is no furniture and next to no props are used. The Lighting Design (Damien Cooper) is empathetic and generally broad. The stage is too large, really, for the intimate nature of the action of the play. Often in scenes that are mostly two, or occasionally three handed, the actors appear diminished in all that white space. A tendency, from the actors, obviously approved by the director, to hang about and hug the posts, on the sides of the set, fleeing the centre, unintentionally, perhaps, demands that the visual spacing and activities of the characters has ‘meaning’. I, sometimes, became distracted in trying to fathom that. The Composition of the piano scene score, Paul Charlier was very apt and easy.

All four actors are really in top form and play intimately and confidently with each other in an attentive and ‘racy’ style. The hesitations, repeats and overlapping demanded in the writing is technically demanding (sometimes overly stylistically repetitive – drawing attention to itself) and this company’s confidence in playing the ‘music score ‘ of the text is sublime, to participate in.

Yael Stone as the deeply shocked and emotionally immature daughter, Sophie, is quite marvellous (a little, overly twitchy), but the skill to burst into the equation of the established trio (a third of a way into the play) and impact with another, and surprise viewpoint, and attach us to the character’s dilemma, so quickly, is much to be admired.

Paula Arundell as Claudia, the intellectually questing, unknowing marauder, with an under developed emotional life, lacking a sense of the consequence of actions, only to be bought to comprehension when the world of others is wrecked and unable to be repaired, is physically lissom, vocally smoky in a sexy mezzo sound, with all the tension-electric exploration of a mind in learning action. Is there anything as seductive or mesmeric as a young sexy body with an active quick mind attached? Certainly in the creative hands of Ms Arundell there is no doubt that she is a fatal attraction for any she sets her target on.

Poor George, played penetratingly by Mr Zappa, does not have a chance, and inevitably will be attracted and wrecked on the ‘rocks’ that this siren calls from. The blundering blindness, from the glare of Ms Arndell’s Claudia, right through to his clumsy and inept declaration and engagement in separation from with his wife of 32 years, to the pathetic self revelation that he has been foolish and a dupe to the arrow of Eros which he thought was Cupid is not only hugely comic but deeply moving. Mr Zappa delivers the facets of a foolish older man who reaches for the flash of a revived ‘youth’, only to fall back nakedly revealed as mortal and fated to old age alone, brilliantly, sadly.

But best and most delicious of all was Wendy Hughes, in a welcome return to the stage in Sydney, as the dishonoured Honour. From the cosiness of a successful life to the near devastating betrayal by a duplicitous and pathetic lover/husband to the gradual muscular development into reclaiming a life for herself, fighting with at first, unpractised attack, until the later growth matures into a newly independent woman, exercising her new sense of complete self-hood, powerfully and almost unequivocally in the last lines of the play, is wonderful to register. This is resplendent artistry, worthy to be celebrated in its accuracy and growing confidence.

This is not, necessarily, a world shattering piece of writing (Think of Albee’s THE GOAT, or WHO IS SYLVIA?) but it is very, very good entertainment and theatre, and in this production eclipses the aforementioned Yasmina Reza play that has whirled around the world in admiring productions. It is worth catching. The acting is terrific.
Posted by George Khut at 11:39 AM

Yes, a good production and excellent acting, especially Wendy Hughes, who used her voice almost musically, and found interesting rhythms, while Paula Arundel tended to stay on one level throughout. Always great to see Bill Zappa, a wonderful presence on stage. But the text - I was bored. May as well have bought a few issues of Woman's Day and a book on pop-psychology ... which was exactly what I thought when I saw the play the first time around. But this is a better production, very good set and use of the space, by designer and by the production

Not a day has passed since I saw "Honour" that I have not thought of the face of Wendy Hughes , her face a battleground of startled emotions, as she registered the news of her husband's decision to leave her. How many times have we witnessed or even experienced something of the kind? It didn't matter ; it was as if we were understanding the dimensions of pain - betrayal and disbeleief and need and wounded pride -for the first time. Maybe this is what Nick Carroway in "Gatsby" meant by a "priveleged glimpose of the human heart.'.
Paula Arundel , William Zappa and Yael Stone met Ms Hughes on the same high plain of achievement - Ms Stone particularly memorable in the scene where she goes to her father's mistress intent on shaming her , and discovers the helplessness of her desperate need.
My attention never wavered . Congratulations are surely due to Lee Lewis.