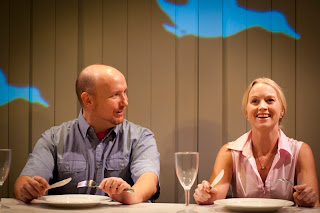 MT productions in association with B Sharp present PARLOUR SONG by Jez Butterworth in the Downstairs Theatre, Belvoir St

“This’ll make you laugh. I’m driving over Langley Marsh, where we blew up that cement works last spring. You’ll never guess what they’ve gone and done. They’ve built seventy-eight houses on that site. And every single house is the same as ours. Same layout. Same front door. So I think why not? I’ll stop off. Have a nose around. Being nosey. Pop my nose in the kitchen and guess what? It’s our kitchen. Same units. Same taps. Cloakroom. Same sink. Same fittings. Lounge-diner, exactly the same. Same floor. Same hatch. Except for… (Laughs) Except for this bloody great rat. In the middle of the room…”

Ned (Drew Fairley) sets up the sub-text of Jez Butterworth’s play : the shocking sameness about him distinguished only by a “great bloody rat”. Ned, a professional demolition expert, who collapses buildings, who, in contrast to the suggested image of his career choice is a nerdy looking guy, talks to his sexy wife, Joy (Anna Lise Phillips), about this suburban estate, identical to their own circumstances, and sensing, maybe, the collapse of his own “building”, his marriage, with the gradual loss of his properties, that have, until now, defined him.

His next door neighbour and friend Dale (Matt Dyktynski) tells us of Ned’s losses: “It started small. A pocket watch. Old set of golf clubs. Box camera… A set of spanners. Screwdrivers…Whenever they need something blowing up…..He’d go away for a few days, when he came back something else was missing….” The loss of Ned’s disappearing possessions, self, culminates in his suspicion that he may have lost his wife, Joy. His joy, “ His little cuddly toy”. And of course the big bloody rat is Ned’s friend, the fit and playful Dale, himself happily married with two kids. Dale’s just playing, of course.

In the ordinariness of suburbia there are also extraordinary melodramas of life going on. Nothing is exactly “the same” even in what appears to be in the ordinary suburban little boxes. Human behaviour subverts that outward show – no matter how much the same it looks, there are differences –even if it is just a rat joyfully playing Scrabble with a sexy lady.

Mr Butterworth has sometimes been compared in his literary interests with Harold Pinter and Alan Ayckbourn. And certainly there is the comedy of the familiar middleclass banalities/domestic tragedies of Ayckbourn and the sinister undertones of the relationship battles between the sexes in that, perhaps, Darwinian competitive spirit of the need to survive, that enlivens the works of Pinter, here, in this play. But it is tamer in PARLOUR SONG, and in this production, milder, than either of the savagery of the other two authors. “Butterworth has explained that a parlour song is a polite Anglicisation of a blues murder ballad, the starkly tragic telling of love, betrayal and revenge being bowdlerised and tidied up so that you could safely play it on the piano ‘in your parlour in middle class England’".

The director Cristabel Sved has elicited good if not exacting performances from her cast. Ms Phillips is particularly ‘Pinteresque’ in her work as the unhappy but resourceful bored wife, Joy. Memories of the delicious Ruth from THE HOMECOMING filtered back to me while watching her. Mr Dyktynski is charming, if not as persuasively predatorial as the text may indicate and so softens some of the contrast between Dale and Ned in the play, while Mr Fairley’s Ned is nearly nebbish enough but is rather too lovely, to pathetic to laugh outright at. The contrast of the men in the play is softened in this production and so the satire/comedy does not properly have the edge it could. It is a mild and comfortable experience.

The set design by William Bobbie Stewart, a green floor (Lawn?) backed by a large window white vertical venetian blind, on which supportive video images are projected ( AV Design Matthew Mc Call), is not ordinary enough or even reflects the ‘sameness’ of the ordinary environment of the world that the characters talk of. The white, mobile, multi-purposed unit designed to tricksily reveal different functions in this production, is hardly ordinary or familiar to the world of the modern suburban estate that Mr Butterworth invokes, indeed one would hardly find it in any other place at all, other than in the Downstairs theatre at Belvoir and so adds very little to the dramaturgy of the play. Functional but not thought through enough. I have similar reservations about the directorial choice of presenting the play in Australian dialect without any vernacular or even named geographical reference changes. It is mildly puzzling and disconcerting to experience hearing about Langley Marsh, Gloucester, North Wales, the Arndale Centre etc. in Aussie ‘music’.(See review of Nina Raine’s RABBIT). One does make allowances, of course, but one does go through a minute, but accumulative intellectual adjustment each time to absorb the incongruities, and so retards the possibility of easily believing the production or being embedded in it.

This is a very pleasant night in the theatre if you want the security of a gentle situation comedy. If you expected either the edge of Pinter or Ayckbourn then this production of Mr Butterworth’s play, which does on reading have such heritage connections, you will be disappointed, except in the performance of Ms Phillips as Joy. This play had a quiet reception in the original production off-Broadway in 2008, but a rapturous one, a year later, in London. Maybe, the play is more culturally meaningful as written, for the British public. Mr Butterworth’s latest play JERUSALEM has had a West End transfer from the Royal Court and is a richly provocative satire on the state of ‘play’ of contemporary England with a brilliant central performance from Mark Rylance, by all accounts. It is, I fear, far to Anglo-centric to merit a production here, but it is a clue to the style that Mr Butterworth sees the world through, that is softly blurred in the choices by Ms Sved and most of her collaborators downstairs at Belvoir in PARLOUR SONG.
Posted by George Khut at 5:11 PM