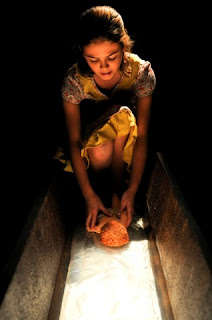 RIDE ON and GRIFFIN INDEPENDENT presents WAY TO HEAVEN by Juan Mayorga, translated by David Johnston at the SBW Stables Theatre, Kings Cross.

WAY TO HEAVEN introduces the Sydney audience to an award winning Spanish contemporary playwright, Juan Mayorga. It is an interesting introduction and one that raises my curiosity about his other work. This is a good reason to go to the theatre to meet this mind. Another good reason to go is to catch a performance by an emerging young artist, Nathan Lovejoy that is fascinating and seductive to behold.

This play (translated by David Johnston) is a construction about the historical fact of the German Nazi building of a model ghetto, Theresienstadt, for the Jewish people. It was a concentration camp constructed as a fake village to fool international inspectors and quell extermination rumours. Not only were the buildings idealised and given a created history, but the population living in this 'village' were chosen and rehearsed as actors, with scripted scenes to impress the visitors with the good life these people were living.

The text written by Mr Mayorga, among other things a Doctor of Philosophy, introduces us to Pascal, Spinoza and Aristotle via the Commandant (Nathan Lovejoy), the conundrum of what it is to be in role play as an 'actor' and the conscience of the knowing collaborators in the 'play' and the guilt of the duped. Mr Mayorga in his notes to the play, “The place of the action (in the play) is fictional and so are the characters… major themes of the play are contemporary. Just as it was yesterday, the invisibility of horror is an ongoing subject in our lives - only the strongest of individuals are able to look directly at the truth and the manipulation of victims used to mask their executioners. This is an ongoing subject in our lives.” (SAMSON AND DELILAH, PRECIOUS, THE HURT LOCKER, where are you?) It was a similar question that we were asked to deal with in the recent production of S-27 by Sarah Grochala, in this very same space last March.

A Red Cross Representative (Nicholas Hope), begins the play with a lecture describing the visit he had made to the ghetto-town of Theresiendadt and his favourable impressions but uncomfortable conclusions. He has taken photographs as well. A series of short scenes follow where we watch young couples and children repeating, or as we gradually comprehend rehearsing innocuous realistic conversation dialogue. Then we meet the Commandant who introduces himself and his task, ordered from Berlin. In the following scenes, demarcated by the simulated flash of a camera, we then meet Gottfried (Terry Serio), the leader of the Jews, who is to play the 'Mayor' and ensure the co-operation of the fellow internees. We watch the relationship develop during the writing of the 'script' and the rehearsal of the 'village' between these two men. Questions about the mysterious trains that arrive in the mornings and the ramp known as the Way To Heaven become a growing and burdensome weight to all. Especially for Gottfried and the Commandant.

The director, Tanya Goldberg, bravely takes on the responsibility of casting two teams of young actors to play the children and she has coaxed satisfactory performances from them all - a daunting task. From the other performers she has also elicited believable work. Nicholas Hope in a long 15 minute or so monologue begins well, occassionally repeating himself creatively, however, and tiring in the task. Terry Serio is convincing, who as Gottfried, grows more and more uncomfortable with what he is required to do, as falteringly, he begins to take in the sinister circumstances, into connected apprehension – the smoke and the ash. That the full potential of the tension in his story is not met, is a matter of direction.

The great feat in this production and worth the cost and time to attend this production is the terrific work of Nathan Lovejoy as the Commandant. Intelligence, wit, elegance, physically hypnotic gestures and details of facial expression, a vocal diversity to guide us through the arguments and the sweet tenor song sound capture a man of sophistication, who despite his learning and sensibilities, dominates and subdues his own growing dis-ease and that of those about him to sustain the menace of his orders from Berlin. This is a minor gem of sustained intelligence and virtuosity impressive acting. This work follows on from other impressive performances in THE CRUCIBLE at the STC, and his clever work with the Sydney Symphony's A MIDSUMMER NIGHT'S DREAM last year. Although none of us who saw his Shylock in Ride On's production of THE MERCHANT OF VENICE is at all surprised by the burgeoning gift.

It is a very long role and the scenes should grow more and more unbearable in the moral dilemma of the two men, the Commandant and Gottfried. That there are longeurs in the later scenes, that seem to repeat themselves in information, is rather the director's problem then the actors. Mr Lovejoy and Mr Serio are not given the space to deliver the battle and pain of the dilemma. The tension stays fairly evenly toned, a kind of flatness ensues instead of the Hitchcockian unbearablity of silent and unstated, subtextual pleadings between the two men. Neither of the two leading collaborators can speak what they know.

The Set Design by Simone Romaniuk, is simple and direct - black space, shelving, water trough and heaped coal – the props sparingly powerful in their choice. The Costume Design by Xanthe Heubel are frighteningly hyper real and unsettling – the shoes without shoe laces, spooky. The understated Sound Design by Kingsley Reeve effective. The lighting is the triumph of the design in the beautifully accurate details of the plotting and colour choices. The support to the atmospherics of the experience that Verity Hampson creates is powerful and haunting indeed.

I found this performance a big disappointment. It was impossible to accept the figure of the conscience-stricken commandant , who has so much TIME to spend on the cajoling and grooming of his chosen team leader. If there had been a developing bond between these two , some flickers of a shocking attraction between them , one's interest might have been held.
Apart from the commandant's first monologue - an attempt to seduce us with a vision of a beautiful harmonious future built on the necessary violence of the present ( Mr Lovejoy is terrific here - his menace coated with honey ) , the play lacks the weight of such films as "The Counterfeiters" and "Boy with Striped Pyjamas" , which it occasionally echoes. The stirrings of indignation come not from anything much going on here , but from knowledge one imports to the situation.
Strange , too , that the author does not give any of his other inmates a voice - except when we hear them 'perform' their set-piece charades.
We wind up with an impression that the worst thing about the top Nazis was that they were hard to take when running amateur theatricals.

Thanks for the input. However as I intimated in my rumination, it is not so much the writing that is not exposing here, but rather ,I believe, the direction of the relationship between the chief inmate Gottfried and the Commandant. The directorial positioning of the actors was not always helpful to the actors, Mr. Lovejoy and Mr Serio, in developing the terrible moral tension growing throughout the play, in themselves and between themselves. Both actors attempted to reveal this but, the direction tended not to look deeper into the acting possibilities of the later scenes. What is really happening? The performing in the theatre has to do with the elucidation of the subtext. We can read the text at home. The subtext between these two characters was under examined and explicated by the director.

Mr Serio with Gottfried’s’ lack of sophistication and hence inhibited textual response has only the sense of the muted human (sub textual) in a growing knowledge of the truth. Mr Mayorga, a philosopher, as well as playwright, is dealing not just with the imagined use of history, Nazi amateur theatrics or otherwise, but the bigger behaviour of mankind in the face of violence. In my view, however powerless Gottfried is, his silence is just as complicit as the Commandant’s. “Silence is consent.” When applied rigorously it is a frightening statement. That the Commandant does not protest to the powers in Berlin is his condemnation. That Gottfried does not protest is also, however harsh it might sound, is his. The point that the writer appears to be making is that however powerless we are, then, or in these modern times, our silence on the monstrous violence about us, is just as complicit, hence my indication to the three films and the social issues exposed there. For instance with SAMSON AND DELILAH it seems the shock of the questioning disbelief of the reality of the circumstances of the story is all that has happened in terms of anything being done or changed. We as individuals and a society are complicit in this neglect. This is not just the Nazi’s we are talking about here, but us, today, as well.