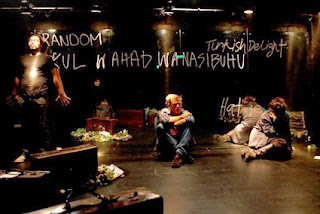 A WHITE BOX THEATRE Production in association with B Sharp present BANG by Jonathan Gavin at the Downstairs Theatre.

BANG by Jonathan Gavin is a really good night at the theatre. A new Australian play. The first act of this play presents a collection of characters and spins a 'web' of connection for them all, to a fate at a railway station platform, where just before the interval break, there is a BANG, which is a suicide terrorist bomb explosion. The second act continues the unravelling connection of these characters.

It is, on the whole, a very moving and human expedition. The writing is impressive. Mr Gavin tells us: " BANG draws from many wells of history, narratology, theology, chemistry, semiotics, the list goes on....", "Metaphysical Naturalism" is what one of the characters decides. It felt an apt description. This is not just sentimentalizing character drawing or narrative telling, there is much magic, much pregnant social, philosophical and political debate. And it is woven skilfully and accessibly into the audiences witnessing, with the multitudinous 'affects' of the human being in all of its confusing, conflicting impulses and techniques of survival under duress, clearly, empathetically and even sometimes, humorously, presented to us.

Six actors, Blazey Best, Caroline Brazier, Ivan Donato, Tony Poli, Damian Rice and Wendy Strehlow play some twenty-two characters, covering a diverse range of ages, sex and cultures. The Director, Kim Hardwick, has assisted these actors to create with simple 'characteristic' adjustments, such as a dialect or tonal commitment or physical emphases to demarcate the shifts and adoptions/adaptations, to seamlessly, create characters, sometimes in a second, in a mere intake of breath, a re-arrangement of a shawl. Wonderful acting.

Actor after actor displays wonderful control and judgement as they shift and change from one character responsibility to another. The delicacy,elegance and deeply mined depths of emotional truth is again and again revealed, each in turn, and each in ever more perplexing and comforting details. This is a remarkable ensemble of actors. Each tuned into the ego of their own creations and at the same time all submissive to the generated sensibility of the performance ensemble, that definitely and remarkably included the audience as one of the main participants. A story being told to the 'tribe'. A story that is trying to help the 'tribe' to find a way to live their (my, our) lives in the present "terrible" times of uncertainty.

What is remarkable about the writing and acting of this play dealing with the issue of cultural and religious war, that deals with great personal tragedies and need for revenge, is that one is wiser and hopeful, not angry or fearful of the predicaments of our surrounding calamities. One is left at the end of the performance with a warmth of identification and shared pain, respect and balanced appreciation of the complex motivations of some of our human brothers and sisters. Even if they are "the other". I left the theatre with an exhilarated sense of hope. An imperative to need to understand, not judge and condemn.

How different is that to the nihilistic exhaustion of the STC's ORESTEIA that one takes away?

Ms Hardwick with her collaborators: Costume and Set Design- Mark Thompson, costumes that are basically serviceable with minimum adjustments to create whole worlds of characterisation for the actors belief and the audience's clarity; a black floor space with scattered detritus and a mirrored wall, that allows the Lighting Designer, Martin Kinnane to create reflected images of heightened poetic power, and a Composition and Sound Design by Steve Francis, taking us, oh, so subtly, from place to place, era to era, and time to time shift. And what is even more remarkable is that all that support by the team is not intrusive on the remarkable 'readings' of the actors of Mr Gavin's wonderful play. Almost invisible.

Dare I say that the NSW government literature prize-givers should take note of this contribution to the Australian cultural fabric of our community? On the night I went, maybe thirty or more high school students (Newington College) were sitting in this tiny space. What was remarkable was the concentration and growing awe of that audience. Remarkable to see many of them, as the play reached its endings, leaning in to the stage action, in their seats, mesmerized by what they were watching. This young Australian audience watching this new Australian play by a young Australian writer that will definitely affect their attitudes to living in the twenty-first century.

I went and borrowed a copy of Mr Gavin's play, A MOMENT ON THE LIPS to read the next day. I was impressed, indeed.
Posted by Editor at 10:33 PM

Couldn't agree more. Loved it too... Everyone go see!

I concur! Bang! is wonderful. The name Tony Kushner was mentioned on the night I went, and I can see why.