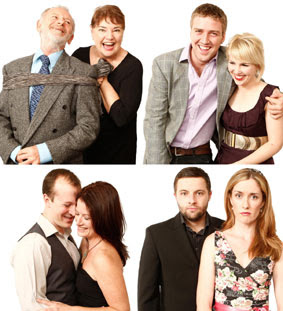 BEDROOM FARCE by Alan Ayckbourn give us four couples and three bedrooms. The three bedrooms are presented simultaneously on stage (Set Designer, Tom Bannerman) and the action flows in and out from one to the other. On the left is Ernest (John Turnbull) and Delia's (Jeanie Drynan) comfortable bedroom in their large Victorian house. In the middle bedroom, Malcolm (Adam Cleland) and Kate (Lizzie Mitchell) are happily nest building in their newly acquired brick terrace house. And in the right bedroom are Jan (Celia Bickmore-Hutt) and her incapacitated husband Nick (Richard Cornally). The domestic harmony in each one is shattered by visits from the neurotic Susannah (Megan Alston) and her insecure and emotionally immature husband, Trevor (Mitch Firth).

With over seventy full length plays to his credit Mr Ayckbourn is regarded as the master of the satiric observation of the middle class marriage and the relationships that sustain them. Comedy of Manners tipping into farce with often a dark tinge of understated tragedy - a kindly objectivity that casts a dark shadow over the laughter. Some have compared his objectives to those of his American fellow writer Neil Simon.

But "though they are theatrical craftsman of great skill, they work in quite different ways, Simon is the master of the one-liner joke…", laughter in Ayckbourn's plays "comes from what characters do because of who they are and because they are at the mercy of each other, and of circumstance" (Holt, 1999). It is interesting that the Simon background comes from that of sketch revue for television, scriptwriting, and the focus was on the words; whereas the Ayckbourn background is as a director, and as such relishes the visual action and actors. He insists that he is as much a theatre director as playwright.

In this production of this cleverly written frothy farce of manners, the Director (Byron Kaye) has led his team to mostly, mastering, with his company, the technical niceties of timing and vocal placement. But still the rhythmic structure of the comedy is not always in synchronisation, and especially in the start, there is an awkward and clumsy sense of musical inaccuracy and so fudges of the comic communication undermine the writer's intent and skill.

Mr Cleland and especially Ms Mitchell have the securest instinct and confidence in their responsibilities and are a delight with the light touch of whimsy that the material requires. Mr Turnbull has the right insight and drollness for Ernest but is not musically balanced by the too naturalistic delivery and concerns of an underpowered and technically unfocused Ms Drynan, his principal partner. The other actors vary in their hold on the 'score' and depending with whom they are in "action" with, succeed more or less. In the work of Ayckbourn there is a necessity for a great precision in the use of language.

Comedy is the fiercest form the actor works in and the most demanding taskmaster - it does not suffer the under-prepared and is merciless. The pain of the mistimed line or badly placed tone, in comedy, is instant knowledge for the actor. When the 'hit' is accurate, it is sublime, the reward is instant laughter, but the miss is palpably a public agony and conscious humiliation to endure. The great comic masterpieces demand well-primed instruments to achieve full potential.

But 'sound' plotting is only the start of his skills for this playwright.

"As Michael Billington points out, Alan Ayckbourn is primarily a visual pllaywright. He understands the primacy of dramatic action which is a narrative of action - not words. What is funny is most often what the audience sees as much as what it hears. His scripts are skilful constructions of both elements; to read only the ill timed or thoughtless remark, without visualizing the ironic consequences for all the participants onstage, is to ignore the real strength of a playwright who is also one of his generation's most experienced theatre directors" (Holt, 1999).

Another problem of this production, then, is in the lack of adequate time that the director allows for the visual absorption of the language and activities to be explicated by his actors, for the audience. The work is rushed and is essentially, verbally biased. Comic illustration of the subtextual pain is not given adequate opportunity to be developed by his actors, or to be seen by his audience. Only part of the play's potential is given.

In another sequence, Mr Ayckbourn writes that the lights are merely raised in each room in turn in a sort of resume of the plot so far. He uses a pattern of lighting states to highlight the farcical nature of the antics of the couples, "a 'coup de theatre' occasioned with a minimum of dialogue by Mr Ayckbourn's understanding of the comic pictures he has contrived..." (Holt, 1999). Punctuated with proper timing the potential for laughter is immense. In this production no such sensitivity is consistently utilised. The stage size may have presented a problem (the beds in two of the rooms are oddly undersized) and so the action may be squashed, and/or the time in the technical rehearsal has not been sufficient to solve the visual exquisites that the playwright has given.

Last year the London and New York audience were given an apparently, wonderful three nights in the theatre with a very fine and funny production of Mr Ayckbourn's THE NORMAN CONQUESTS. (This playful trilogy of interlocking plays had a remarkable production in Sydney eons ago - Tony Llwellyn-Jones and Jennifer Hagan amongst the cast, I fondly remember). While this production of Mr Ayckbourn's skilful play does not fulfil it's entire potential, it is still a diverting and more than amusing alternative to the recent serious and worthy repertoire in our theatre spaces in Sydney. Practice does make perfect and with time these comic techniques may become more polished. Certainly a pleasant night in the theatre.

One has to reach back to TRAVESTIES to recall a laughter-drenched night in the theatre. And one recalls the mastery of the direction of Tom Stoppard's TRAVESTIES by Richard Cottrell last year for the Sydney Theatre Company at the Opera House and yearn for his deft skills to be brought to bear for our delectation again soon. The directors who have this gift and discipline are rare indeed.

Either you are being very humble or my memory is failing. As I recall, the Sydney production of The Norman Conquests from "eons ago" featured a scene stealing, very funny and yet surprisingly touching performance by one Mr K Jackson Esq as the quintessential Brit twit.

Rowan,
Close, but I didn't act in this play, I was an assistant to the director, Robert Quentin.

Thanks all the same