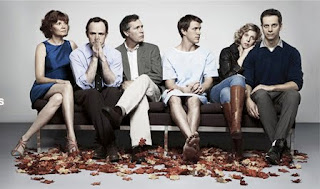 The relationship between an atheist, Adam(Patrick Breen) and his Christian boyfriend, Luke(Patrick Heusinger) forms the central dilemma in this light weight play. What was interesting for me was the possible clash of the value systems that these two men might have. However, ultimately it is treated in a relatively superficial way and the sentimental struggle about whether the truth can /should be told to a trenchant believer like Luke’s father, Butch (Cotter Smith) at the hospital bed of a dying Luke, the homophobia of the family and the understanding of the friends becomes the thin thread of interest.

There are lots of light jokes and over the evening, the cliché of character types and character sit-com humour dialogue takes us on to an ultimately sentimental ending. I have to admit, that despite my unhappiness with the quality of the play, I had a little cry. But if this play represents – as some of the American press have claimed – the best new American play of the Broadway season then they are in trouble.

The acting is of a very relaxed television truthfulness and played to win you theatrically if not completely believably. Nothing to take home and cherish as a bench-mark here. The Set is fairly bland and looks cheap jack (Wilson Chin) in its affects. (Director, Sheryl Kaller.)

A few years ago Terrence McNally’s LOVE! VALOUR! COMPASSION! was taken to Broadway and won a swagger of prizes. I wondered if it was because it was a gay play and wow how interesting that we have become so liberal to see this type of play on a Broadway stage. “How progressive we are.” I have similar cynical reservations about this work. Cute but dull. Amusing but boring. Maybe we should commission Mr Albee to write a gay themed play and we might have something to celebrate. NEXT FALL is not good enough, really. Especially when considering the cost of the ticket. If it is a gay themed play you want to see then find THE TEMPERAMENTALS. A much better time is to be found there… But more of that another time.
Posted by George Khut at 8:11 PM