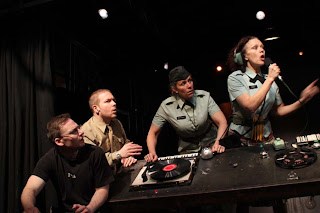 NORTH ATLANTIC by James Strahs is a satirical dash through an American military experience. It is set in the waning years of the Cold War on an American aircraft carrier where the military strategies/jargon of the crew, both male and female, are infused /confused with the breathless innuendo of the hard core gobbledegook of officialdom and the sexual undertowings of the underlings on duty. With the urge of sex winning the battle for attention with this crew. If it makes sense, it must be because you were once part of it – the military, that is, or you have watched a lot of war movies of all vintages.

NORTH ATLANTIC is a ‘vintage’ work of the Wooster Group. First devised in 1983, revised in 1984, Re-staged in 1999 and now again in 2010. And certainly as a first time experience of the Wooster Group it is a bewildering time capsule of what one has read of their work. The material itself sounds and feels extremely out-moded, the satiric impact diminished over twenty years of dwindling pertinence, and its revival must surely be justified as a demonstration of the theatrical techniques of the company’s team/house style.. This is, indeed, impressive.

The set (Jim Clayburgh) is mostly a steeply raked representation of an upper deck high tech decoding room. It shifts and tips dangerously.(Would Australian O.H.S. authorities pass this design?) In front, a platform exists for standing “jokes” and a further lower floor level for more usual if asinine conversations between the ‘crew’ of this ship. The Sound demands are miraculously organized by Bruce Oland, Matt Schloss and Omar Zubair; music arrangements by Eddie Dixon. There are many musical numbers heartily attacked by the performers. The lighting (Jennifer Tipton), a sophisticated pattern of focus.

The acting demands are huge and wondrously executed, and after mostly lack lustre performances and commitment in most of the other work I have seen in New York theatre this visit, it was a welcome thrust of professional technique that grabbed my attention from the very first utterance. Ari Fliakos as N.I. Roscoe Chizzum is particularly arresting. Bur all the company: Paul Lazar, Steve Cuiffo, Zachary Oberzan, Kate Valk, Frances McDormand, Jenny Seastone Stern, Maura Tierney, Koosil-ja and Scott Sheperd are worth catching and admiring.

But what the performance adds up too is less quantifiable. I was happy to see a bit of theatre history in production terms but wished for something more interesting in content to take away. Elizabeth LeCompte is the director and this museum piece should just be filmed and archived (probably has), for as cutting edge theatre, neither the text material or the guerrilla tactics of the production style are anything we don’t already know about and inherited from practitioners learning from these past masters of shock and awe in the theatre, all over the world. In twenty-seven years a lot of water has passed under the bridge. On reflection, viewing a Marx Brothers film does give the same adrenalin rush of ‘theatrical chaos’ but with a lot more entertainment – laughs. The text content seems to be satirically still relevant. NORTH ATLANTIC however brilliantly re-composed, feels like nostalgia and a waste of resources.

That other war ‘musical’, SOUTH PACIFIC, playing up at the Lincoln Centre seems to be able to hold its age and impact more impressively, according to friends.
Posted by Editor at 1:05 PM

i too was very disappointed by north atlantic- i was very excited about my first wooster group expirence. but it all felt very pointless, style over substance and a waste of money