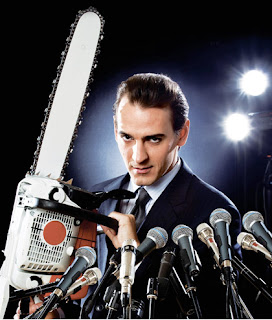 This is my third meeting with the Duke of Gloucester- Richard III in the last couple of years. Firstly, the extraordinary one hour ‘reduction’ created by Pamela Rabe and Benedict Andrews, to serve that Director’s particular agenda for his vision of the great cycle of the historic rivalry between the Houses of York and Lancaster in the Sydney Theatre Company’s THE WAR OF THE ROSES, based on Shakespeare’s eight plays, where The Duke was played as a petulant brat- “a monstrous clown” cavorting in a child’s playground horribly committing acts of violence in an atmosphere of a world of raining ash, without restraint. Then to the fluid ‘form’ exploits of Kate Gaul’s, Siren and MakebeLive Production at Carriageworks with six actors, including a splendid exploration by Thomas Campbell as Richard III in May of last year. I have also treasured memories of Anthony Sher’s great ground – breaking performance in the Royal Shakespeare Company’s production in the mid-eighties, on tour in Melbourne, alongside the films and performances of Laurence Olivier, Ian MacKellen and Al Pacino.

This play is obviously infinitely attractive to the artists of the theatre and like all of Shakespeare’s work adaptable as a contemporary writer. (refer to Jan Kott’s excellent book “Shakespeare Our Contemporary”).

Simon Phillips in his notes in the program tells on his re-reading of the text, of being arrested by a tiny speech by a Scrivener, who in writing up an indictment for treason, that one of the characters, Hastings, has supposedly committed, is struck by the incongruous impossibility of the timing and therefore truth: “Who is so gross, that cannot see this palpable device?” (Act3, Scene 6). “For the scrivener the trumped-up charge was a sign of the times, but, the surprise is it’s a sign of ours, too. Choose your own blatant political swindle from recent times: Stalin’s show trials, Joh’s gerrymander, Mugabe’s faux election or that skulduggery in Florida in 2000. Everyone saw through these palpable devices, yet they still got away with it. Other treasons – children overboard or sexed up WMD’s reports – take us longer to wise up to, but do the same damage.” Mr Phillips goes on to say “The political manoeuvring in RICHARD III strikes me as shockingly up to the minute, up to the latest headline… It leaps off the page like some pacey political thriller, and it’s for this reason I decided on a contemporary setting. A certain vital energy flows down our modern corridors of power, an energy captured well by TV series such as the neo-Shakespearean THE WEST WING. In Shakespeare’s day power came dressed in ermine and purple, topped by a crown; now it wears a well-cut, single-breasted suit, but the dynamism is the same. Today’s power rushes from conference to conference; it cuts deals; it plots against opposing factions; it frames its desires in weaselly legalese and hunts for loopholes; it tells the convenient lie and blows the dog whistle; and it unashamedly wraps itself in the flag and in warm, comforting pieties. All this is in RICHARD III.”

Taking this contemporary edge and inspiration Mr Phillips and his Set Designer Shaun Gurton have concocted a brilliant design configuration of a great house/ palace/corporation that spins tirelessly on a magnificent revolve to reveal deftly apt environments with efficient and telling details of unique identification for the scenes in this Elizabethan play to translate into a thrilling and frighteningly recognisable world that we all live in, today. A hospital with its waiting room, an autopsy room, a lavish dinner hall, a dingy corridor, a quiet but comfortably disarming room for conspiracy conversations with drinks and moody lighting, a media conference room (with the support of some video and live broadcast technique, Josh Burns) and a palace that is being ransacked by rebellious population in the culminating scenes of the “battle-fields’ of Shakespeare’s Bosworth. The set design is a star of this production but never intrusive, wonderfully sewn into the action and atmospherics of the production needs. No grand display for its own sake but totally submissive to the conception of the play by Mr Phillips and Mr Shakespeare. The lighting by Nick Schlieper vitally collaborative with the vision of the concept. The composer, Ian McDonald, no less clever in his blatant and subtle musical interpolations – both of the extremes of the production need met skilfully. The Costume designs by Esther Marie Hayes no less brilliantly conceived but also seemingly magically pragmatic to address lightning changes for the 17 or so actors covering 26 individual roles in different states of living- celebration, mourning; nursing staff, conference attendees etc. It seems great detail planning was invested in this work and the result is magnificent. (The technical rehearsals must have been horrendous!!!!) With all of this background support the actors are viscerally challenged and, mostly, beautifully calibrated to meet and utilise the inspiration about them.

Much has already been said about Ewen Leslie’s performance as Richard, Duke of Gloucester, by others. I can only add my admiration and awe: Here is an actor so centred, so immersed in the great psychological needs and machinations of this character; so fit vocally, and, miraculously, physically, so daring in the plumbing of the darkness of the night of his soul to explicate this horrendous figure of power, so familiar to us down the corridors of history, too often in the very recent times, that in the power house energy that he pumps out in scene after scene, he floats many of the other performances to levels of revelation of both character (and skill) that is, only on reflection, after the event of the performance, that one fully appreciates the dexterity and generosity of what we have just witnessed. Here is an actor of some note. And gratefully he is young and has, hopefully, time to continue to delight us. Mr Leslie has been quoted as to his preference and love of the theatre. Let us hope and pray that the theatrical powers that be, continue to provide this artist with the work that will continue to challenge him to a fuller flowering of his gift and talent. The tragedy for some of our promising artists is that the work is often not regular enough or challenging enough to deliver these ‘titans’ to the full power of their potentials. I have a list of actors that would benefit with more constant challenge and would, given the vision of this production team, could, develop a consistency of performance exemplified in the great European theatres of our times. (Mr Leslie will soon be seen in THE TRIAL at the Malthouse, Melbourne and Sydney Theatre Company – a Co-produced production with ThinIce – no pressure, intended, of course.)

Mr Leslie is surrounded by a magnificent array of women, Jennifer Hagan (Queen Margaret), Alison Whyte (Queen Elizabeth), Deidre Rubenstein (Duchess of York) and the volatility of the play sparks with the power glow of an atomic explosion as the female of the species re-acts to this truly ugly male. Ms Hagan’s poisonous madness and white hot power harnessed with laser like accuracy, Ms Whyte, pathetic, and cruelly tortured in the great Act 4-Scene 4 of mounting maternal horror and the masterful slow burning of Ms Rubenstein to her magnificent rage to Richard’s face – the vocal pyrotechnics shaped by this actress culminating in the indelible declaration of “NEVER” delivered at a scale rarely heard or seen on the Australian stage is thrilling. Zahra Newman in the role of Catesby, here translated into a possible ‘Condoleezza Rice’ advisor, is also terrific with the armoury of effects that Mr Phillips has given her in an extrapolated role reading. She plays both efficiency as the agent of Richard’s plans, but, in counterpoint to the raging royals above, displays a dismaying and mounting despair and horror, subtly but concretely for us. Humphrey Bower was more than impressive as Buckingham; Ian Bliss as George, Duke of Clarence, tantalising in the brief but startling choices in his work; Nicholas Bell as Stanley, and Bert Labonte as an accumulatively interesting Richmond (an Obama touch) are also notable.

My only reservations, lies in the relative lack of directorial detail with some of the rest of the cast. All have the “goods”’ but not all have been helped to refine or develop their opportunities. Most of the faulty impressions are really tawdry technique details but they stain, slightly, the complete ‘masterpiece’ that this work could be. Perhaps in the end, that cruel tyrant: “TIME”, prevented Mr Phillips or his team of assistants from attending to the obvious necessities. In an ensemble, it is not only the great that cause the metering out of the ultimate ‘wreaths of honour’ but the consistency of all the ‘cogs’ in the wheel. From the greatest to the least – in the assessment of art it is the whole picture that is balanced and appreciated. Measure the success by the weakest links. Here there were weaknesses. It is one of the wonders of my recent National theatre experiences that the work in all areas of the enterprises I saw, were impeccably strong, or at least gave the impression of such. All areas of the collaborators, impeccable. Astounding.

This is still a great achievement. A friend, I admire and respect enormously, with great knowledge of these interests, confided that he felt that this was the BEST Australian production of Shakespeare that he had seen. I wish, I hope that this work augurs well for a near future of equal achievement. If the Bell Shakespeare recent HAMLET was a measure stick, for me, of that company’s work than this is certainly a measure of The Melbourne Theatre Company under the helm of Simon Phillips. Here is a salute for much more in the future. A gauntlet of proffered greatness has been thrown. May it be taken up.
Posted by George Khut at 10:32 PM