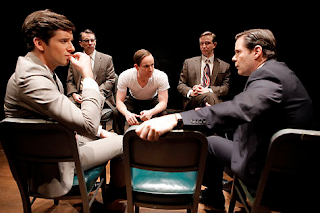 “Temperamental” was an American slang word for homosexual in the 40’s and 50’s.

THE TEMPERAMENTALS by Jon Marans is a play about the men who formed the Mattachine Society in 1950, in Los Angeles. It was one of the earliest homophile organizations in the United States, probably second only to Chicago’s short-lived Society for Human rights,1924. As you can see, well before the turning point of the Stonewall Riots in New York, the GLBT community. This play is then a type of docudrama about this society’s founding group.: Harry Hay (Thomas Jay Ryan), Rudi Gernreich (Michael Urie), Chuck Rowland (Arnie Burton), Bob Hull (Matthew Schneck) and Dale Jennings (Sam Breslin Wright).

Harry Hay, a married man and communist, conceived an “international…fraternal order" to serve as "a service and welfare organisation devoted to the protection and improvement of Society’s Androgynous Minority”. Rudi Grenreich, an Austrian refugee from Nazi Germany and later MGM costume designer, on meeting Hay and reading his document known as “The Call” declared the document ‘the most dangerous thing he had ever read” and became an enthusiastic supporter , and, incidentally, his lover. On November 11, 1950. Hay, along with Gernreich and friends Dale Jennings and lovers Bob Hull and Chuck Rowlands, held the first meeting of the Mattachine Society. The play covers these meetings and the preambles to this event and to the later trials and tribulations of the society in the Cold War America, 1950’s environment.

But it would be wrong to think this play is a just a dry documentary. It explores the men involved and the struggles that they have, both personally and societal, to the growths and adjustments that each has to make to the recognition of their rights and healthful need to find a way to live. It covers the realities of a ‘closeted’ world and the emotional and political, lawful impingements that the bigger world impressed on them, to survive happily, (or attempt to).

The growing personal and political relationship between Harry Hay and Rudi Gernreich is attended to by Mr Ryan and Mr Urie with consummate delicacy and insight. The longings of these humans and the inhibitions of the period that made it dangerous to express them are beautifully presented under the guidance of the Director, Jonathan Silverstein.

Mr Urie (some of you may know him from his work in UGLY BETTY, a television production) gives, what I regard as the best acting performance I saw on this trip to New York (Norbert Leo Butz (ENRON) and Ari Fliakos (NORTH ATLANTIC) being the other work I admired, especially). The wit of the physical expression and the intelligence of the verbal choices, including the wonderful use of the Viennese dialect was bedazzling.

The other actors, in multiple responsibilities were also, variously, excellent. The sophistication of Mr Burton’s Vincent Minnelli, the empathetic creation of the emotionally immature personality of Chuck Rowland by Mr Schneck and the contrasting heroism of the working class or everyman, Dale Jennings, by Mr Wright, were all appropriate and generous offers.

The production design (Set and Costumes, Clint Ramos) is very basic and serves as a backdrop to the many locations of the plot without fuss, but with a sense of usefulness and taste. The Lighting (Josh Bradford) and Sound Design (Daniel Kluger) supportive to the mood and environment changes.

After the tepid and rather clichéd Broadway production of NEXT FALL, that also deals with the “Gay” experience, it was a relief to have a, relatively, adult approach to this world. Sentimentality did not raise its head, although the events of THE TEMPERAMENTALS were tremendously moving. The complexity and the sensitivity with which the production explored the shifting levels of the personal and political dilemmas was of a high order of acquittal.

The 2010 Drama Desk Awards gave an award to the actors: the Outstanding Ensemble Award. Michael Urie received the Lucile Lortel Award for Outstanding Lead Actor. Justly deserved.
Posted by Editor at 11:16 AM