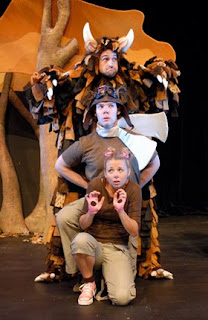 Christine Dunstan Productions presents Tall Stories Production of THE GRUFFALO. The magical musical adaptation of the award-winning book by Julia Donaldson and Axel Scheffler at the Seymour Centre.

It is school holidays in Sydney. I was invited to a performance of this adaptation of the children's book THE GRUFFALO. It was a wet day but the auditorium was packed and stacked out with an excited horde of young theatre-goers and some presiding adults.

All were apparent fans of this book for when the play began they were captivated by the adventures of the MOUSE (Crystal Hegedis) looking for nuts in the dark forest, where she encounters a fox, an owl and a snake (The Predators, Stephen Anderson), who all seek to have her for lunch. Fortunately, Mouse has an imagination and invents a friend called The Gruffalo (Simon Van Der Stap) who scares away the predators.

The adaptation (Olivia Jacobs and Toby Mitchell of Tall Stories) is a model for children's entertainment. It includes music and lyrics (Jon Fiber and Olivia Jacobs) and great and many opportunities for audience interaction, including a thrilling romp through the audience by the Gruffalo that has become more real than the others. We can really reach out and touch him!

The actors directed by Olivia Jacobs (Assistant Director, Stephen Colyer) on a delightful and pragmatic set (Isla Shaw) are genuinely true to the characters with a 'little 'eye to the adults to keep us all entertained. Amazingly fresh and honest performances.

But best of all is to sit with the hordes of the entranced and voiciferous audience. They loved it. I was brought to much laughter and even, a little, to tears. Sitting next to me was another adult who spoke to me about LONG DAYS JOURNEY INTO NIGHT, which she had seen the night before. She had brought along her grand children to this piece of magic, cultivating the audiences of the future with her own love and devotion to the theatre. Soon they to may see Mr O'Neill - faster than one can blink. Time is swift.

I have heard cynics talk of the demise of the audience sitting in dark spaces watching actors at play. Today I had palpable proof that will not be so, anytime soon.

If you have children, do take them. Even if you don't, recapture the joys of your early theatre going. Highly recommended.
Posted by Editor at 5:38 PM

I went last week too Kevin. We were in the front row and the kids just loved it. They've been singing the songs for days.
I must say I was pleasantly surprised by how entertaining it was and it was just long enough for parents and children.
Lizzie