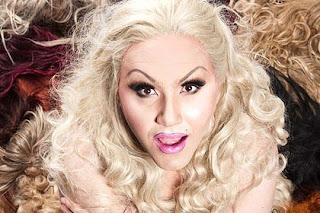 This will be a rave. Trevor Ashley in a spectacular cabaret performance with a number of wigs and a few costume changes delivers musical impressions of twelve divas that he has loved all his life.

He has a most wonderful voice full of remarkable flexibility, power and range. To compliment that he has the skill, intelligence and wit to use it well to entertain you, and to stun you into belief into the 'channelling' of these women's talents and spirit.

With a glamorous make-up, in front of his audience ,at a stage mirror, he simply changes wigs to 'become' these individuals. Occasionally he adjusts a costume with additional pieces (or completely changes), again all in front of you, so that one witnesses the theatrical magic of the performer being possessed - With the simple 'breathing in' of the character’s life force Mr Ashley then permits himself to translate/transmute and find the physical container/characteristics that are icons of identification for us to suspend disbelief and embrace the vision in front of us. It is a powerful trick of acting.

The highlight is the creation that is Shirley Bassey. DIAMONDS ARE FOREVER release one into a world of astonishment with Mr Ashley. But his following rendition of AS LONG AS HE NEEDS ME is simply moving- I wept with admiration and jealousy at Mr Ashley's talent. Perfectly wicked creations of Carol Channing, Whitney Houston, Bonnie Tyler and Lady Gaga balance out the love he pours into Judy Garland and Liza Minnelli from the Carnegie Hall Concert album among others.

In a cleverly scripted personal chat about himself, which highlights the contrast of his artistry, Mr Ashley invites you to share with him in his own journey from young boy at home at the youth theatre company Shopfront in the Sydney suburb of Carlton (where he first met Paul Capsis - 25 years of shared history- imagine!) to now. Beautifully he confesses or rather confides that his own persona when he walks the streets renders him invisible but with the power of his theatrical flare he can be "Fabulous". Indeed he is. FABULOUS.

The supporting four piece band led by Andrew Worboys is acutely and accurately adjusted for maximum impact in this space. Mr Dean Bryant has directed this production into a joyful celebration of Mr AShley, his talents and his respectful loves.

Along with Paul Capsis, Iota, Eddie Perfect and now Trevor Ashley there is an amazing cabaret/singer scene that can headline for me and have my presence at their command. Mr Ashley has been cast in the forthcoming production of HAIRSPRAY so we may not see this work from him for a while. But keep him in your list to see if you didn't this time round.

I had a great time too. I sat with older man/lady couple. It was nice to see them enjoying from start to end. I thought I should have taken my family... maybe next time :-)