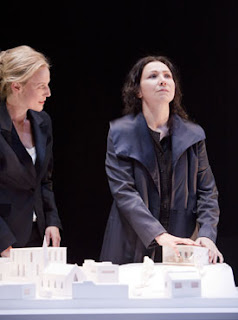 LIKE A FISHBONE: An Argument and an Architectural Model, has The Architect (Marta Dusseldorp) with her Intern (Aimee Horne) about to take a model of their latest project to a presentation meeting to her commissioners when a strange woman, The Mother (Anita Hegh) arrives unexpectedly in the office. Thus we have the model.

The Mother is (unaccountably) blind and wet (it is raining). She has been ‘visited’ and spoken to by her daughter, who was killed in a tragic school shooting – she is dead. The Mother is a fundamentalist believer in God and does not want the model that the Architect has proposed as the memorial. She wants, and so does her daughter, she says, something that may inspire her to understanding her GOD and substantiate her belief, her faith- religious hocus-pocus (?) The Architect is a divorced career woman with a son, who lives with the ex-husband, the father – not her. She is ‘corporate’ and a non- believer. She wants “Simply to…to create a…a context Yes? A context for people to have their OWN experience of the site. We’re simply presenting people with the facts, the truth of what happened and allowing them” to have an experience, “a collective experience for the wider public. A context” – corporate, post-modernist gobbledegook (?) Hence we have the argument.

In the program notes, the author, Anthony Weigh talks of an reading a comment from of a grieving woman at the World Trade Centre site. He mentions Richard Dawkins and his book THE GOD DELUSION; Christopher Hitchens’ book GOD IS NOT GREAT: HOW RELIGION POISONS EVERYTHING and the writings of the philosopher/novelist Phillip Pullman and his railing against the ‘indoctrination’ of children by the churches of the world. This Argument, then, that transpires in the play, although it touches and begins to engage on big issues, becomes a very emotional one, one that results and concludes with a very ‘animal’, physical and violent wrestle to the ground for the possession of the model, between the two women. Emotions overtake the debate. Reason and logic dissipate (Attacking and wrestling a blind woman!), it is fairly glib. I feared that the obstinate window (a metaphor?), cause for some heartache for the Architect throughout the action of the play, would magically open at last-awful metaphor. The ending scene seemed gratuitous and a trite melodramatic – singing to the son over the telephone a song from the Wizard of OZ – this corporate woman has a heart too!!! Really.

But the evening in the theatre is enthralling because the performances by the actors, particularly Ms Dusseldorp, are vivid and passionate in their details and crafting. Ms Dusseldorp, at last, out from under, what I observed as the confining casting in the Sydney Actors Company, has a role that permits the full expression of her considerable talent. The shift and changes from second to second are immensely detailed and totally occupying. The speed with which she dares us to follow her through the dilemmas and desperation of her ‘argument’ are disarming of our objective assessment of the writing and absorbing to observe. In fact none of the actors give pause for disengagement with disbelief and when the hour and ten is over one is flushed with a satisfactory theatrical experience. An all to rare experience, in contemporary Sydney Theatre. Ms Hegh grows with righteous passion to an almost incandescent rage. Ms Horne is both correctly functional and comic, always, however, a real person – one came to worry about the waiting taxis with/for her.

Jacob Nash’s Set Design a black gloss set of oblongs with white edges is elegant and easy to be with. The Lighting Design from Verity Hampson is as excellent as ever - the weeping rain maybe a little over the top. Costumes by Bruce Mc Kinven apt, except the all important shared coat - ugly. Tim Maddock’s control is present .

So a good night in the theatre even if the playwriting is not as challenging as the premise and possibilities.
Posted by Editor at 3:00 PM

Thanks as always for your commentary on this piece Kevin. I saw the play tonight Friday 23 July at what turned out to be a yoof initiative performance for the respective groups for STC/Griffin (wondered why I was almost the oldest person in the theatre). I was also lucky enough that there was a cast/writer/director session at the end of the play which enlightened certain things about it. What I had read in some media commentary about the play before I went was that it could perhaps have been said to have some basis in 9/11 (I note that you refer to some mention of this in the program which I did not buy - as per your commentary elsewhere how often have we felt ripped off by spending eight dollars or whatever on a programme and ended up really only paying for the actors bios and little else in terms of background material). I cannot remember whether 9/11 motif had been referenced in the already mentioned media piece as a result of an interview with the playwright Anthony Weigh or whether that was the construction of the author of the commentary piece. When Weigh was asked after the show about his inspiration for it he did not actually mention 9/11 but rather things like Port Arthur (much closer to home) and a massacre in an Amish community in the US. When it comes down to it Weigh pointed out that there are unfortunately plenty of incidents which have a general factual basis which gives a more than adequate basis for the rationale of the construction of the "memorial" which forms the centre of the play and the Argument which forms the subtitle of the play between the Architect and the Mother.

Pt2 - The fact that the Architect/Mother rang her son to sing him the lullaby I did not see as melodramatic -- I think it was just the mother's response to what the other mother had gone through with the loss of her daughter. The playwright Weigh did say that he had decided to write a play for all women actors as he thought virtually all plays he could think of had their female characters talking only about their men -- he wanted to write something about women engaging with women. In that regard I think he has spectacularly succeeded with the duel between the Architect and the Mother. The respective performances of Dusseldorp and Hegh were I think stunning in their qulaity and interplay and will likely be one of the highlights of the Sydney theatre year. The inclusion of the minor fourth female role for the Child as the spectral lit up face behind the immovable window at the start (did not know what it meant at the start), and also at the end (when I did), not to mention the somewhat ghostly entry onto the stage right at the end, I found somewhat superfluous. In fact it was interesting that the director commented at the after show talk that the last section was scripted by the playwright but the initial sequence was a directorial conceit (I would call it) of his. It was interesting that we were also informed that the London performance excised both of those sequences -- and I think there was adequate reasoning for that as they really did not add anything other than a slightly "spooky" factor which it did not really need to book end the piece.

Also a minor matter Kevin, your watch must be very fast as the piece is certainly not 1hr 40 - definitely more like 1hr 10! Having been to a number of pieces at Belvoir Down of that time length I am very much attracted to it - there is a certain attraction in the short sharp - get it over with - no need for disruptive drinks in the interval - construction of most "conventional" theatre of "two halves".

Dear Mr Mink,
Indeed it was only approximately only one hour ten. I was guess-timating and my Bus Timetable became embroiled. Thank you so much to your input and insights into the work that you see and then blog onto me.