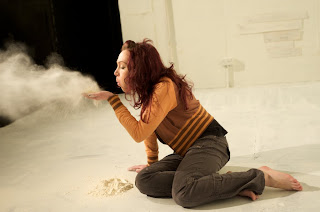 The company called subtlenuance in the program notes declares it “is dedicated to theatre that is ambitious, independent, challenging and engaging. Our focus is the production of original work; work that is physically exciting, emotionally enthralling, and intellectually stimulating. We believe theatre is a forum for many voices. For this reason, it is an art form especially suited to both the exploration and creation of subtlety and nuance. Through these two qualities our world becomes richer.”

TALC concerns the relationship between Kate (Jo Richards) and Sam (Lucas Connolly) from living together to engagement to house buying to marriage proposal. Sam is, generally, an optimistic realist with all the conventional aspirations of the young heterosexual, whilst Kate is a pessimistic idealist with maudlin obsessive tendencies. This is not a happy, “lets fall in love – get married together” story. As the play unravels it appears that Kate is depressed by infantile fantastic extrapolations of her world and her responsibilities in it – The $12,000 diamond engagement ring on her finger is a “blood” diamond and guilt seeps in…! It becomes apparent that she is in real need of therapy. An infatuated Sam has to deal with a partner with issues out of the ordinary, and must face a dilemma of having to decide to support or abandon her. The play finishes altruistically if not conclusively or convincingly- redemption (?).

TWO GATES is a monologue concerning a naïve, hedonistic and newly graduated female Australian University student, (Heidi Lupprian) who recalls her first journey out of the country, in comic detail, and in a spontaneous drunken/drugged gesture after a night out in a London club finds herself in Poland confronting the reality of a World War II Concentration Camp memorial- the abyss (of the real, bigger world) opens before her and maybe “within her” – redemption (?).

Both plays are relatively interesting if not clichéd in the ground they cover. Talc is 75 minutes long and would benefit from editing. Much of the play indulges in repetition and does not necessarily move forward with real pertinent gain, from scene to scene. The character of Kate becomes tiresome in her infantile behaviour and arguments and Sam becomes stalemated into accommodating her needs from a simple but deep infatuation that is hard to justify from the action of the play. TWO GATES has sometimes clever observations, wittily expressed, but the overall monologue is not very original and one soon guesses the journey – it too, could benefit from editing (either, or both, in the writing or the acting).

The acting talents are adequate if modest in their skills. The production qualities are rudimentary (Design, Emma Vine) in a fairly prescribed space and budget. The sincerity is undoubted.

This is true of the whole enterprise and much is to be admired, in the dedication of the subtlenuance Company. These productions, however, are limited and modest in their appeal. Hopefully the company continues to find “the courage not to turn away” and continues on its ambitious and sincere mission. From small things, great oak trees grow.
Posted by Editor at 3:09 PM