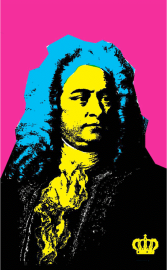 The Australian Brandenburg Orchestra is celebrating its 21st Birthday. It also paid tribute to Ken Tribe “our dear friend and patron of the Orchestra, who passed away last week at the grand age of 96”. Music by Henry Purcell and George Frideric Handel were represented by music for choir.

The first work was Suite from Abdelazar, or the Moor’s Revenge, Z 570 by Purcell. Music arranged from the incidental music for Aphra Behn’s play, written in 1695 (Behn was one of the first professional female writers in England, THE ROVER, her most revived play). The Suite is pleasant enough but not absorbing. The recognition from the Rondeau second movement of the theme used by Benjamin Britten in his YOUNG PERSON’S GUIDE TO THE ORCHESTRA was a welcome fillip to the experience.

The Brandenburg Choir appeared on stage for the second work: Ode for the Birthday of Queen Mary, Come ye sons of art, away, Z 323. Four of the choir sang the solo roles: soprano, Siobhan Stagg; alto, Tim Chung; tenor, Andrei Laptev and bass, Ashley Giles. All four were impressive and the clarity of enunciation was remarkable. The trumpetless duet “Sound the trumpet’ sung by two of the soloists was especially enjoyable. The choir was impeccable in its responsibilities.

After the interval, Concerto a due cori, No2,HWV 333 by Handel. The featured Baroque Horns were a treat to hear as were the recorder and oboe contributions. The featured work of Handel’s Anthems for the Coronation of King George II; No1, Zadok the Priest, HWV 258 and then NO 3, The King Shall Rejoice, HWV 260 were thrilling. The impact of the choir was dynamic and meticulous. The unblurred accuracy of the articulation of the choir was amazing. The affect was one of awe and joy.

Paul Dyer has created a performance of precision and feeling. Some find this type of music in too large a quantity a trifle “boring”. I enjoyed the concert and the variety of selection immensely. To quote from one of the Anthems; “Alleluia. Amen.”
Posted by Editor at 8:43 PM