Kiss of The Spider Woman - The Musical 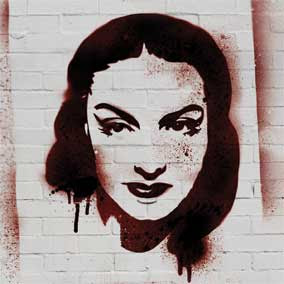 Gaiety Theatre and Power Arts present KISS OF THE SPIDER WOMAN – The Musical. Music by John Kander. Lyrics by Fred Ebb. Book by Terrence McNally. Based on the novel by Manuel Puig. At the Darlinghurst Theatre, Sydney.

On entering the relatively, small space of the Darlinghurst Theatre, the small company of performers, 11 in total, including 4 musicians, are on stage. Tuning, revising their instrumentation, pacing, glancing at the audience as we trickled in, nervously interacting with themselves, exiting and entering an upstage door, but mostly ‘imprisoned’ in the space and, finally, as the lights lowered in the auditorium, grouping for the show’s musical prologue. I felt a little like the aristocrats gathering for the performance of the persecution and assassination of Jean-Paul Marat in the asylum of Charenton as performed by the inmates – uncomfortable, very, slightly, Brechtian!!! A bourgeoisie audience out for an evening’s entertainment about the political atrocities of very recent history in musical form.

KISS OF THE SPIDER WOMAN, The Musical (1992) is based on a novel by Manuel Puig, concerning the incarceration of a sexual offender and a political prisoner in a maximum security prison, set against the Dirty War in Argentina (1976 -1983) sparked by the dictatorship of Jorge Rafael Videla. This novel became a play and finally a Hollywood film starring William Hurt, Raul Julia and Sonia Braga (1985). Molina (James Lee), an openly gay prisoner and convicted pederast, is forced to spy and inform to the authorities, about a socialist/Marxist political prisoner, Valentin (Frank Hansen). To pass the time and distract from the conditions of their reality, Molina indulges in the vivid re-telling of the movies of his youth which feature Aurora (Alexis Fishman).

This is a very impressive production. The Set (David Fleischman) and Costume Design (Teresa Negroponte), along with a particularly beautiful and accurate Lighting Design (Jack Horton) is very convincing and aesthetically arresting, with all the right values for the grimness of the story within the boundaries of a musical. The invention of the moveable stairs and ‘gurney’-like platforms is extremely clever and inventively used by the Director/Choreographer (Stephen Colyer). A revolve -stage is created for great affect!!! The choreography, within the space limitations is very well done.

The adaptation of this full scale musical, (which I saw with Chita Rivera on tour in San Francisco in 1993) to this pared–back, pocket size is admirably achieved. The musical orchestrations led by Craig Renshaw with Michael Huxley, Dave Manuel and Oliver Simpson is extremely well done and beautifully balanced with and against the un-mic’ed voices of the company (Sound Design, Jeremy Silver). The atmospheric prison soundscape ominously grounding to the real world of the play. The singing of the company is mostly impressive. The quality of the singing by Mr Hansen is especially thrilling. No less impressively Ms Fishman, not only sings the femme fatale of Molina’s imagination, Aurora and The Spider Woman but also the lover of Valentin, Marta. Jennifer White as Molina’s Mother also makes a mark. The beautiful quartet DEAR ONE, early in Act One, is probably the most impressive musical invention and explicated performance of the night.

This production is very worth while seeing and then clamouring for more of the same. This ‘potted’ version of a musical which we might not otherwise see in Sydney or Australia is a very interesting addition to the variety of theatre genre available in the Sydney scene. An altogether exciting enterprise. The recent monthly one off versions of so-called ‘forgotten’ musicals at this same venue also worth catching. I remember the reviews that I used to read as a boy of the Menzies Hotel Theatre Restaurant ‘potted’ musicals and longed to see- alas too young. Was Nancye Hayes a star in these productions? I think so. Certainly, Hayes Gordon, the legendary director/actor/teacher of the Ensemble Theatre was one of the regular creators, from memory.

THE KISS OF THE SPIDER WOMAN is ultimately a work that is a lesser achievement in the Kander and Ebb repertoire, for example, CABARET and CHICAGO, and it skates sometimes on the edge of show-biz bad taste ( e.g. The Morphine Tango) that both the other shows, with their political, satirical edge manage, with much better artistic judgement. Other than the weakness in the book adaptation of the novel and the less inventive musical inspirations of Kander and Ebb the flaw of this production is the acting by the principals. Mr Lee, especially (The Oscar winning performance of William Hurt as Molina is still very resonant). It is ‘classically’ bad musical theatre presentation, substituting signalled emotional sentimentalities and melodramatic pretence, where more truthful experienced expression would strike the audience with the grim realities of the terrible cruelties and crimes, both psychological and physical, that we are asked to witness and believe in the world of the play. The truer the grim lives are, the more remarkable and moving the contrast to the Molina escape fantasises of Aurora and the Spider Woman will be. The balance is out of kilter, for the dramatics are not believable.

Keep an eye out for the future work of Mr Colyer and his very laudable team in this genre area, do.
Posted by Editor at 1:44 PM

HI Kevin. I disagree with you about Lee's performance. The whole piece is dated and stereotyped and I felt Lee's performance worked perfectly in this context. The point at which they both meet & kiss was sublime and will stay with me for a long time. So to reflect back at you. Bad notices of good performances are equally lose lose. Loss for the actor and loss for you as a fair reviewer.
James (not lee)