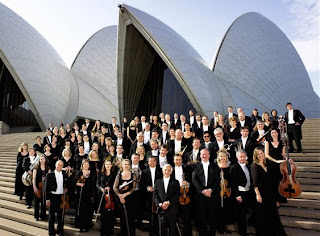 The Sydney Symphony, as I write this, are on their way to a two week, eight city, nine concert tour of Europe. Five and a half tons of musical luggage, sixty-five flight cases (on Emirates) to be in Italy for a performance at the Stresa Festival on Sunday (29th August).

Last night there was a Benefit Concert for the orchestra. Three big pieces of music conducted by Vladimir Ashkenazy. The first work was an Australian score by Peter Sculthorpe, MEMENTO MORI (‘Remember that you must die’). Written in 1993, this work is part of Mr Sculthorpe’s “fascination with the landscape and sounds of Australia and the Asia-Pacific region and has led to a number of Sculthorpe’s works being influenced by geographical and historical events.” This work specifically inspired by the problems facing the historical inhabitants of Easter Island. It is an environmentally focused score, the music is non-dramatic reflecting “a state of no-desire, and desolation and loneliness before the sombre face of the Pacific ocean”. It reveals itself intentionally, by Mr Sculthorpe, in what he describes as ‘music of regret’ – a complex admixture of regret and anger. It is meditative and demands held breath concentration to experience the nuances of the instrumentation. Peter Sculthorpe was present for the playing and appeared on stage to the audience applause. I always find it inestimably moving to have the composer present at concert, so it was here. Three Australian composers will have work of theirs played on this tour.

The Piano Concerto No.5 in E flat,Op.73 (Emperor) by Ludwig van Beethoven was the following piece. For me this work has long memories. It was, along with the Beethoven Violin Concerto, my first memory of crying in response to the magic and fathomless personal stirrings of music. Some house, somewhere in Kogarah, as a youth, my life changed deeply, mysteriously. John Chen was the pianist. It was his first concert engagement with the Sydney Symphony. Mr Chen’s career “was launched in 2004 when, aged 18, he became the youngest-ever winner of the Sydney International Piano Competition”. Now in the fledgling stage of his professional career, he is also “ completing a doctorate in piano performance at the University of Southern California, Los Angeles”. Under the guidance of Mr Ashkenazy, Mr Chen played with delicacy and what appeared to me to a deftly light touch. The sound was gentle and fluid. Variation of key hitting powers was what I missed. The stridency of the music was not as moving as I remember or require it. Still it is and was an impressive debut with the orchestra.

After the interval, Peter Ilyich Tchaikovsky’s MANFRED – SYMPHONY after Byron, Op.58 became the main event. An enormous orchestra was necessary including the Concert Hall organ. Based on a poem by Byron that concerns the anguish of Manfred who wanders in the Swiss alpine region, opining his incestuous longings for his sister, Astrate, and the musical illusions to waterfalls, rainbows and a fairy, and ultimately to redemption, the score has all the dramatic/melodramatic passions, frustrations, tenderness and bitterness of Tchaikovsky at his best, personal, torturous self. Seven months was devoted by Tcahiovsky to this score, the subject, program-matter urged upon him by fellow Russian, Balakirev, after the Frenchman Berlioz pleaded ill health and old age prevented him from embarking on such an enterprise.” You must of course make an effort” urged Balakirev.

In reply Tchaikovsky, with “ tongue firmly in cheek: ‘I could perhaps MAKE AN EFFORT, as you put it, and wring from myself a series of mildly interesting episodes, in which you would find conventionally gloomy music to reflect Manfred’s hopeless disillusionment, and lots of glittering instrumental sparks in the Alpine fairy scherzo, with the sun rising in the high register of the violins, and Manfred dying amid the pianissimo trombones. I could dress all this up with piquant harmonic curiosities, and submit it to the world under the portentous title: MANFRED SYMPHONIE D’APRES, etc. I might even win a dash of praise for this child of my musical loins. But such work doesn’t interest me.”

“Toward the end of his labours, in August 1885, he confessed that ‘the symphony is emerging on a huge scale, complex, serious, taking up all my time, utterly exhausting me; but an inner voice tells me that I do not labour in vain, that this will turn out to be perhaps the best of my symphonic works.” The Manfred symphony was well enough received when first performed under Erdmannsdorfer in March 1886. Since, the symphony has not had a very exposed career, “and indeed MANFRED is longer and inhabits a sound world more lavish than any of his other symphonies; it calls for an unusually large orchestra and playing of exceptional virtuosity”, and the “Pathetique’ may have surpassed it.

It seemed to me that Mr Ashkenazy and the orchestra were especially primed for the playing of this score, this night. Focus, love and care emanated from the concert platform. Lush , lavish and violent emotions of great musical fluidity and articulation swept the hall, and I was way back in the hall – a long way to reach, in this notoriously acoustically difficult hall. The Manfred theme crashed on me, through me, and the nightmare film by Ken Russell, THE MUSIC LOVER, flashed back into my body memory, with Richard Chamberlain as Tchaikovsky and Glenda Jackson as his unhappy wife, Nina, been shaken in the train carriage on their honeymoon journey, she, naked, covered in champagne, blood, food and sweat Oh, horror. Delightful horror!

The organist (David Drury) sat way up in his eyrie and I waited, anticipated. Teasingly, the pipes ‘immolated’ right at, in, the finale. Wham!! A terrific finish to a farewell concert. Glorious music and music making give life such a fillip.

Bon Voyage and thanks. See and hear you in September.


All quotes from the program notes by Peter Sametz, and TCHAIKOVSKY – A Biography by Anthony Holden, Random House,1995.
Posted by Editor at 4:27 PM