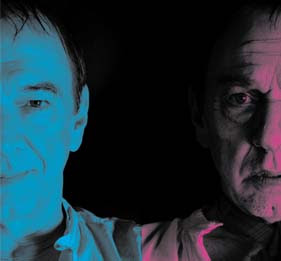 One of the influential books, among many, on my view of the actor is a 1987 publication called THE WAY OF THE ACTOR, subtitled “The Path to Knowledge & Power” by Brian Bates (Shambhala). Brian Bates is a psychologist who spent seven years researching the psychology of acting with students of the Royal Academy of Dramatic Art in London. He went on to be a Director of the Medical Psychology Project at the Department of Psychology, University of Sussex, England.

“All so called ‘primitive’ societies have at their head important people with special powers. These people have the ability to transform themselves in public performance from their normal personality into somebody or something else: a god or an animal, ancient ancestor or representation of a spirit. Their crucial role in society is to transcend the barriers of their own identity, follow a path to personal knowledge, and in dramatic performance, to lead their audiences into ritual journeys into their own psyches. They are mystics, magical seers and creators of visions.” Today, still, the actor is that ’vessel’ for the audience. “The actor connects with, and apprehends past experiences in an intuitive way (and) the inner material is employed in breathing life into a character or role”. A character or role that enlightens and hopefully enlivens us to the complexity and wonder of our selves. Then, added to this :“We are all actors. Every day we play a number of roles with varying degrees of skill and commitment. Our stage moves from home to car and train, work place, restaurants, shops, parties and public settings of all kinds…We reveal parts of ourselves and conceal others to fit the demands of the situation.”

WINTER’S DISCONTENT written and performed by William Zappa is an illuminating and emotional experience, an unmissable experience. For, Mr Zappa reveals the actor as craftsman- artist, which is the extraordinary, and the everyman which is, us, him, and what we often mistake as ordinary, both in the one entity. What this work shows us, who usually sit and watch our storytellers, is the dilemma and inner conflicts of the successful storytellers in our world. And Mr Zappa, certainly, is one of Australia’s great storytellers, I modestly suggest.

Firstly, the magical power of the prepared gift of the talented performer is revealingly shown to us in this wonderful monologue. Winter (William Zappa) arrives in his dressing room and prepares himself for a performance of a play based on the Victor Hugo character Thenardier from the novel LES MISERABLES, not the musical. We witness his physical and vocal ‘warming up’. We watch him make up. We watch him disrobe and dress in costume. We watch an external transformation. Magic, in front of our eyes. But better and more startlingly, the magic of willing possession is witnessed by us, we watch Winter breathe in and relax into the shamanistic state of the allowed possession of Winter’s body, into this Thenardier. Periodically we see, miraculously, Winter breathe out and dispossess, exorcise the spirit of his imaginative powers that have formulated Thenardier, back to the man, Winter, and then back again- at will. This is a behind the scenes look at the creative tools of the actor in action in the act of creation. It is doubly amazing because it is not just Winter and Thenardier we are privileged in watching, but the originator of this, for Mr Zappa, both as writer and actor begins to surface into our consciousness as well. Three spirits, three mystic beings, three creations of a visionary.

Secondly, what Mr Zappa does, in the person of Winter, is let us become credent to the personal problems of the everyday man, actor – horrible confrontations with the finality of mortality and the consequences of his own story’s appetites and activities that has wrought the circumstances for that fate to unfurl. The struggle between the power of his gift as actor, as Thenardier, and his failure in his real life role as ‘father’ – a gift he begins to doubt, almost despair of. The struggle to embrace the conflict between his responsibilities as an actor, both, as a storyteller and in life, become the grief of the work. A pregnant dilemma for us all, in greater and lesser degrees of consciousness. Actors all.

The writer, Mr Zappa, tells us in his brief program note, that this work “is not autobiographical, although some of the events referred to are based on my own experiences as an actor.”
Based on my first observation of the Tommy Murphy play GWEN IN PURGATORY: Advice to writers. Write what you know. The subsequent musings and then personal projections of mine, since watching this play and performance, churns over and over, just what is autobiographical and what is not? The third level of this brave and accomplished work worms into my self examination. I have been led by this work into my own psyche. The work of the actor has been done. The baton is in my hands.

Mr Zappa is assisted by the modest and generous support of Jeanette Cronin on stage. The Design (Set; Imogen Keen; Lighting; Gillian Schwab) is simple and adequate. The original director credited is Maeliosa Stafford.

I cannot recommend this work too highly. For those of you who are in awe of the magic and tools of the artist, unmissable. If you are a fan of good acting and writing, even more reason not to miss it. If you believe that Mr Zappa has made great contributions to your theatre going life, then have it confirmed by attending. It is a shockingly short season – just two weeks. (The work has had other outings but this is the first opportunity I have had of catching it).

Here is a play that The NSW literary prize givers should not ignore (along with BANG). And let us hope the Sydney Theatre Company and their ilk around Australia take note. If not, the Festival honchos, both National and International, should take note of a very, to say the least, arresting talent (!) Last year I was in awe of Kathryn Hunter’s turn in KAFKA’S MONKEY at the Sydney Theatre Company. I am similarly moved by this work. Ms Hunter has even being nominated for a Helpmann Award. Let us hope Mr Zappa has the same honour (?) next year.
Posted by Editor at 9:46 PM

Kevin - I felt compelled to write - whether you give a good or bad account of a play - I have never wanted to go to the theatre MORE, than since I subscribed to your blog. The main stream reviewing/criticism (if you can call it that) is impotent compared to this stuff. X Raj