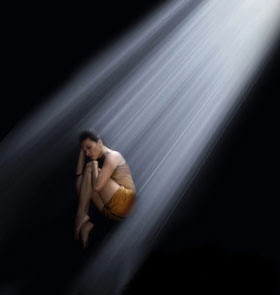 BITTER/SWEET is written by Lisa Freshwater featuring Lena Cruz and Nigel Ubrihien and is a collaboration with both these artists.

From the program notes by Lisa Freshwater:
“In 2009 when Lena approached me about collaborating we intended to create a cabaret with a few nice songs and a bit of patter, but over copious cups of tea and conversations we realised we couldn’t ignore the elephant in the room. Both Lena and I experienced a death during our birth experiences, although we had known each other for a decade we’d never discussed it, not knowing how to approach the subject…. The next issue was how to turn these stories into an entertaining piece of theatre. When I mentioned our theme to curious colleagues they would politely nod and mumble something about it being interesting or brave, I would defend the theme by saying ‘it’s going to be very funny!”

Ms Freshwater and Cruz with other allies took up the challenge and took the risk. Unfortunately it is the twin aspirations of trying to put out this very traumatic subject matter and also make it ‘funny’ that results in a work that falls, unhappily, between the two stools. Neither of the stools are satisfactorily dealt with and the resultant work, dramaturgically, is a mash up of not always clear objectives or ’pathways’ of communication, and rests confusedly in a heap on the floor. The shape is a mess. It is sometimes a very mystifying experience in terms of content. Including the lament of “So Long as He Needs Me” to a song about the black widow spider eating her partners to a ditty from Anne Boleyn to a most amusing satirical sketch and song and tune about Oprah Winfrey (An original composition THE EMPHATHETIC AGE OF OPRAH – THE OPERA by Nigel Ubrihien), a compass of direction spilt out in sugar and much else, besides brief allusions to ‘’the elephant in the room’- the death of the foetus and/or child.

The staging by Ms Freshwater is elegant. The Set Design by Leonie Evans accompanied by subtle and beautiful lighting by Lucas Paul, and the core costume of a white slack suit and additions to this ‘base’ by Brigette Thorn is tastefully presented. The musical support and acting offered by Mr Ubrihien is, as always ,immaculate – witty and punchy. The musical performance by Ms Cruz is well prepared and has the right scale for the space, the acting and chat/patter work in between not always as true.

As with the other musical work I have seen this month EVERY SINGLE SATURDAY, it is the writing in BITTER/SWEET, especially, in this particular case, the form/structure, that needs much more attention. If the writing is unsure, no matter what else happens, the work will falter. In both cases it does.

I believe a serious revelation of this little discussed topic, even with music, is worth pursuing. But how to make it ‘funny’ as well, maybe asking for a kind of genius that is very rare indeed.
Posted by Editor at 7:54 AM