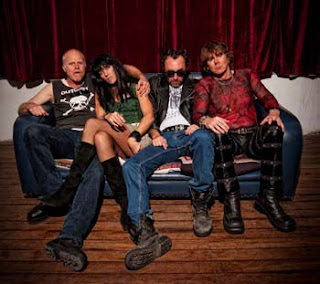 “Punk, anarchy and a mid-life crisis – the paradox of ageing rockers who still think they’ve got it. 30 years ago Billy Abortion’s band mates left him bleeding to death in a foreign hotel room …there are some things that are hard to forgive and forget. But when a credit card company (FREEDOM) offers big bucks to get the band back together to record their latest jingle (based around the DYSFUNCKSHONALS chorus from their only hit song PLASTIC PEOPLE!!!), the other band members are hoping Billy can put the past behind him. They all the need the money and some of them wouldn’t mind another shot at fame, well, notoriety at any rate.”

This is a rambunctious romp of a play.

If, as a writer, you might have some un-PC comments that you might want to air, what better way to help justify them then by having a drunk, drugged and politically inclined set of anarchists, masquerading as a Punk Rock band, as your principal characters. And here they are: Billy Abortion (Graeme Rhodes), Mark Faeces (Michael Long), Louise Gash (Emily Weare) and John Smith (James Lugton). And believe me there are some audacious rants in this play, some concerning 9/11, or rather, “11/9”; the capitalist system, corporations and much else. The sheer shock of some of the material is enough to force a response of comic disbelief from you and there are, as well, some genuinely funny lines. That the writing also has some clumsily, and over written mawkish melodrama (cancer, ageisms, lost loves etc) as well, must be noted, but it does not sink the evening. For, besides the broadsides of comic comment and observations these actors also play some rousing (one way or another), anarchistic music in imitation of the Punk “regime” of thirty odd years ago – almost a rock concert as well. The music written and composed by The Dysfunckshonalz.

What is most attractive about this night in the theatre are the performances.

They all have zest, energy and a witty, and sometimes necessarily delicate, commitment to the material. James Lugton, as John Smith, is especially impressive as the stuttering, permanently, drunk and drugged drummer. His immersive performance, with, I swear the pallor, of an addict, such, that, I felt that I could also smell him, was truly mesmerizing, cleverly created. The other band members are also hilariously multi-skilled in their tasks. Take note of Ms Weare’s convincing burnt-out and dying Louise Gash, giving veracity to some awkward writing by Mr Packer. Abigail Austin as Gina, confronts and holds her own against the group, as the corporate representative for the credit card company attempting to subsume their ‘charisma’ into commercial product.

The design by Katja Handt is very supportive and useful into swift multi-changes of location- the grunge suitably present, ably assisted by Teegan Lee (Lighting) creating atmospheric changes, along with the sound design by Tom Hogan.

Michael Pigott , recently seen as Woyzeck in the Downstairs Belvoir space, directs this work with flare and confidence. Two skills worth watching.

The company and the audience all had a very good time on the night – I did as well. Laughs are certainly available.
Posted by Editor at 10:10 PM