NaGL (Not a Good Look) 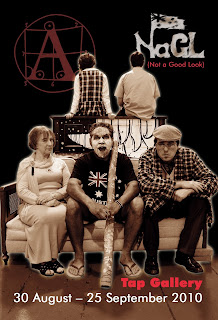 NaGL (Not a Good Look) written and directed by Lech Mackiewicz, creatively brought to you by mr.tomchuk and Auto Da Fe. Produced by IngJay Productions with support from Factory Space Theatre Company at the TAP Gallery.

Here is another new Australian play.

What marks this work as arresting and worth attending is the cultural prism that the writer and director, Lech Mackiewicz, “a Polish artist immigrant”, brings to this exercise of his view of living in Australia in 2010. At least I found it so - a provocative experience to take on board on several different levels: Content and style at least two of those levels, consciously (in time the subconscious, perhaps).

The Auto Da Fe Theatre Company, one of the producers of this work, was formed in 1987 by Lech Mackiewicz, Jurik Szafjanski (two Polish artist immigrants), Justin Monjo and Jamie Robertson (two NIDA graduates of that year). “Since its inception, the company set out to deliver challenging and entertaining theatre marked by Mackiewicz’s own style and aesthetics that were based on his understanding of theatre”. Mr Mackiewicz and the Assistant Director of this project, Izabella Mackiewicz, both, are graduates of the National State Academy of Theatre in Cracow (Poland). In 1996 Auto Da Fe ceased developing works in Sydney and moved, with Mackiewicz, to Poland where it continued to produce work for the theatre and independent film. And now, “This new incarnation will be known as Teatr Auto Da Fe under the wings of mr.tomchuk –the organisation created in late 2009 by Tom Pelik and Lech Mackiewicz” (all quotes from the program notes).

I quote this history as it is an entrance to appreciating this work: NaGL.

Mr Mackiewicz, then, arrived in Australia in 1987, worked as a performing artist, and in the 90’s returned to Poland. He came back to Australia “in 2002, (and) the Australia I came back to was different to the one I left. NaGL is a result of my observations. This family (in this play) represents a nation, metaphorically speaking, a nation divided yet united”. The family is made up of mother, English woman(?) Grace ( Jennie Dibley); Italian father, Manolo (Keith Alexander); son, Roman (Tom Pelik); and daughter, Vata (Malina Mackiewicz).The play is set in the living room of the family house, filled with the detritus of family living, with amusing touches such as the map of the world and other pictorial decoration, along with bits of furniture, hung upside down. (Set Design: Lech Mackiewicz). The other feature is that a corner of the room is set up as a boxing ring which is presided over by the fifth character of the family, indigenous Uncle Chuk (Billy McPherson), who “is the only one who rightly belongs to this family, but who tries the hardest to earn his place”. Metaphor abounds.

Uncle Chuk welcomes us to “Home”, his and the Eora, and then precedes to introduce the 15, or so scenes, about this contemporary family, as boxing rounds, with Brechtian titles roughly scrawled on brown cardboard. Here, we have a multi-cultural, multi generational family group that muse over the oddities of living together as a family and as individuals. The bemused parents find the daily interactions of family and the interaction with the culturally different world outside, on many levels, daunting and mysterious, and yet survive in the bond of their necessity for each other. It is only in confrontation with the children, who have decided that they all ought to divorce from each other, that a real crisis appears. Uncle Chuk, like a ‘deus ex machina’, occasionally enters into the action of the living room with the parents and attempts to mollify their panic and dilemma.

It is a very ambitious piece of writing. It does not always succeed in maintaining clarity of exposition or development and we often find ourselves wandering into diversionary contemplations of “ life theatre and the mirror” and such like, which have a feel of a type of playwriting form that is either, now, dated – in the usage, I recognise its style, or very culturally idiosyncratic, that is Polish or eastern European. A challenge but, still, arresting – pertinent, if not entertaining…

On top of this, another production layer is added, with the ‘family’ cast, stylistically presented in white face, with blue or ‘lake’ emphasis on lips and eye shadow. The indigenous character remains natural, (except in the last scene, a zinc sun burn white slash, appears). There is a very clear inference to the origin of the training of the artistic leaders of this company, the Polish heritage of acting styles in the production. Mr Pelik (the program does not reveal his training but it looks very thoroughly absorbed from, maybe Krakow?) also presents stylistic mannerisms for character identification that are fascinating. The contemplation forced upon me in deciphering these oddities of production style adding to my experience of the play. Whether it elucidated my comfort in comprehension is something that I am still sorting out (maybe the unconscious is at work and will clarify, in time, the experience).

How fascinating to meet this new Australian work so firmly based in a style of approaching the theatre that is ‘foreign’ to the mainstream Australian manner in writing and direction. Mr Ian Wilding, a relatively recent English immigrant, working with an Australian director (Chris Mead) present a contemporary Australian political theatre work, QUACK, in an Australian tradition - Victorian vaudeville – that is recognisable from the traditions of the Nimrod/Belvoir founders and it is instantly digested. Meeting this piece of contemporary political theatre expressed in another European tradition, Eastern European, coming from newer Australian artists is exciting in its potential and provocation to thought and may need time to be digested fully.

However bemused I may have been at the end of the performance, I was stimulated indeed by the contribution that Auto Da Fe has made to my theatre going. It is creating on the fringe of Sydney Theatre and obviously the budget is that of an “oily rag”, the space itself hauntingly visceral to engage with, depending on taste, one way or the other, but it is testament to the urgency of the need that the ‘real’ artist has, to express their observations of being part of the cultural heritage and debate in Australia in 2010.That the new Teatr Auto Da Fe exists is important and ought to be nourished.

As the program notes, challenging theatre. But worthwhile.
Posted by Editor at 4:41 PM