Once Under A Sky 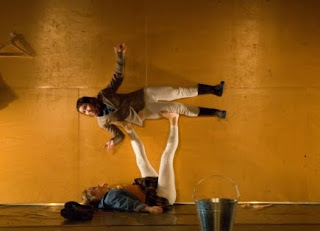 The Sydney Fringe and Cursing the Sea present ONCE UNDER A SKY by Freya Sant, Kate Sherman, Michael Pigott at the Newtown Theatre, Newtown.

Beckett’s Vladimir and Estragon, Stoppard’s Rosencrantz and Guildenstern talk and talk, ruminate and joke about the world, existence and many other passing imponderables as they arise in their conversation in pursuit of meaning, and, perhaps, comforts. Sant, Sherman and Pigott’s May and August, two fisherwomen, in this delicately poetic whimsy ONCE UNDER A SKY, do so as well.

Growing up, one of my deeply embedded cultural inheritances is of Peter and Paul, two fishermen, fishing for the souls of men. Indeed, culturally I find no difficulty in seeing fishermen. Fisherwomen, still, appear to be an oddity, and this takes a little conscious adjustment. Not really difficult of course, but still to be done even, last night in the theatre, and afterwards in contemplation of what I had just experienced. Two fisherwomen, at the seaside casting and fishing in the great ocean: the great “collective unconscious”.

Only the great, and relatively, neglected playwright and poet Dorothy Hewett, for me, touches similar areas of a type of surreal and provocatively poetic reality. ONCE UNDER A SKY has a point of view that is slewed, happily, from a female perspective. The words, the preoccupations, the poetry, the methods, the thought processes and the double expression of them through the movement and speaking have the abundant and ‘different’ expression of the female sensibility. It is a very beguiling journey.

This work has been in development, in many different expressions, over two or three years, on and off, by these artists and is still evolving, apparently, in both content and expression. I could not claim that the work at present has the greatness of the Beckett or the Stoppard but it feels that it has the capacity for more than “immortal longings.” If one of the intentions of The Sydney Fringe curation is about the focus on new work and emerging artists then this is a very interesting contribution.

Freya Sant and Kate Sherman, co-writers with Michael Pigott (the director), are also the performers, and they have engaged in physical skills that serve to communicate alongside and in co-operation with the verbal and intellectual poetics. Ms Sant has the disarming physical qualities of a vast array of technique that includes circus and a mentoring in Body Weather by the De Qunicey Company. The performance persona is warm and charming. Her partner, Kate Sherman, similarly, with a NIDA and Legs On the Wall background brings energy and a raffish good humour and earnest energy, physical and intellectual to her creation. Both actors are vocally at ease with their poetry. The language of the writing is mesmerizing and gently, hauntingly muscular; attention is gathered and held.

Michael Pigott, has immersed himself into the tangible originalities of the works conceptions and objectives. His masculinity not at all intrusive in the tasks. This is the third work that I have seen of Mr Pigott in this last month (WOYZECK and THE DYSFUNCKIONALZ !): prolific then, widely focused but also full of artistic integrity and good judgement.

The work has a short season. I hope the company can find the funding to evolve the project further with a designer etc. A good experience.
Posted by Editor at 7:12 PM