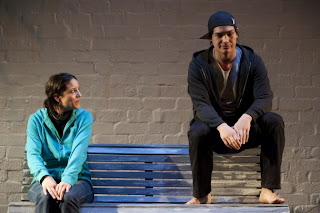 White Blackboard in association with B Sharp present YELLOW MOON – The Ballad of Leila and Lee, by David Greig at Belvoir St Downstairs Theatre.

David Greig is a prolific contemporary Scottish playwright. I have admired his writing for sometime: THE AMERICAN PILOT, DAMASCUS, and a recent work commissioned by the Royal Shakespeare Company, DUNSINANE (Scotland, immediately after the Macbeths, is particularly interesting) and this is a gentle introduction to his work in action, my first. YELLOW MOON – The Ballad of Leila and Lee was commissioned by TAG (Theatre about Glasgow) Theatre Company and premiered in the Citizens’ Theatre , Circle Studio, Glasgow in 2006.

YELLOW MOON concerns the cataclysm of actions and consequences. In this case the ‘innocent’ action of violence that has an immediate consequence of murder and then the subsequent affect on the lives of two young adolescents, Leila and Lee, as they try to make sense of what they have caused, and flee into the Scottish back waters looking for, I guess, ‘sanctuary’, if not a father, as well. That these two young people are also dealing with the awakening of their hormonal, sexual inclinations, by themselves, serves to underline the bewildering world that this generation of human finds themselves in. That their solutions, without adult guidance – are un-stabilising – can be no surprise, even though it is apocalyptically pitiful.

Following on from the two plays by Polly Stenham: THAT FACE and TUSK TUSK seen this year in Sydney, and the Australian phenomenon of the multi award winning novel, JASPER JONES BY Craig Silvey, where children from broken family circumstances attempt to solve their problems without the wisdom or support of adults, the growing theme of the lost childhood and absent (lost) parents in contemporary life keeps mounting in the vernacular of our story tellers and gives me personal pause of concern.

Written for four actors who then collectively tell the story through third person observations and settings, monologue, delivered straight to the audience, and character scenes, it is an exercise for the actors that is demanding. Initially, it is for the audience as well, as we sought out the style and try to absorb the story sign posts. On top of that the director Susanna Dowling has invited the choreographer Johanna Puglisi to develop a physical language to move, motivate and tell the story in co-operation with the written words. It is not quite the technique that we saw presented to us by FRANTIC ASSEMBLY in their work for STOCKHOLM at the Sydney Theatre Company Wharf 1 space this year, but works in a gentler, subtler way. Not so much a feature of the work as, in STOCKHOLM, but rather as an aesthetic support. Ms Puglisi has created a generally pleasing and successful ‘language’ and the actors all handle it with grace, confidence and ease. The marrying of the simultaneous verbal work and the physical is not always in clarity comprehension co-ordination, but mostly, and ultimately, more satisfying than not.

Set and Costume by Irma Calabrese, Lighting by Teegan Lee, and a wonderful compilation of Composition and Sound by Ekrem Mulayim are integrated design elements that are harmonious to the action of the direction and simply and beautifully presented.

The play in its very fast journey is brought to a very moving conclusion. Layla Estasy (Leila) and particularly John Shrimpton (Lee) give performances of these two young people, that are executed in unencumbered directness and sensitive simpleness. The tear down the cheek of Lee in the climactic conclusion to the performance was, perforce, a moment to savour and be moved by. Danielle Cormack (a little textually unstable, on the night I saw it) and Kenneth Moraleda are also very good in the many tasks the writer has given them. At an hour and twenty minutes in length the time speeds by and the conclusion catches one unaware in its accumulative power. It is a very simple and refreshing, if not morally disturbing, night in the theatre.

It is also refreshing to observe the non-racial casting of Mr Shrimpton and Mr Moraleda in this work and white blackboard (the production company) ought to be congratulated and be remarked upon in this interesting choice. It augers well, I hope, that more of this will happen in Sydney and Australia. Many, many talented actors of racial differentiation have found the opportunity to use their gifts and their drama school training, talents, thwarted by antiquated myopia in the casting of performance in this country. More power to the vision and talents of a company such as this. Congratulations. Attention must be paid and changes applied.
Posted by Editor at 2:46 PM

fantastic production. i agree totally. in the review and in particular the colour blind casting. this is a great night out in the theatre and people should go! I have heard that ticket sales are slow -so spread the word - it's a ripper! stevie rodgers